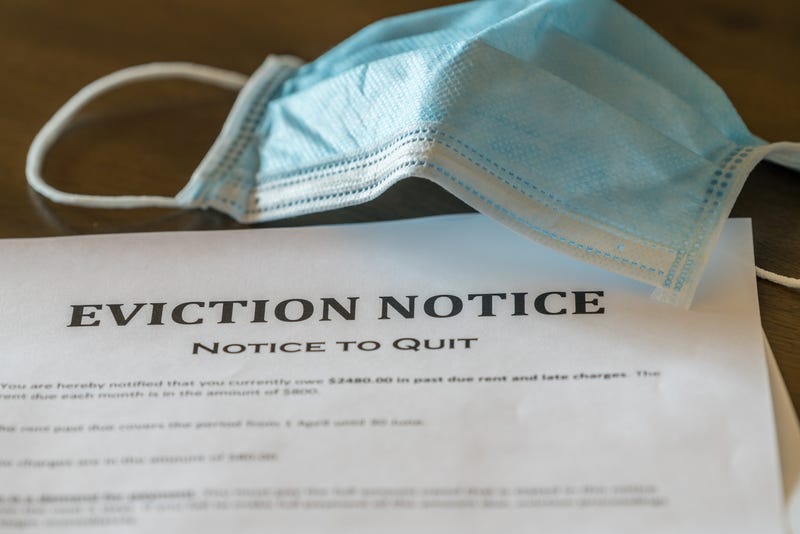 Carson City, NV (AP) - A federal freeze on most evictions enacted last year is scheduled to expire July 31, after the Biden administration extended the date by a month. The moratorium, put in place by the Centers for Disease Control and Prevention in September, was the only tool keeping millions of tenants in their homes in many states. Many of them lost jobs during the coronavirus pandemic and had fallen months behind on their rent.

Landlords successfully challenged the order in court, arguing they also had bills to pay. They pointed out that tenants could access more than $45 billion in federal money set aside to help pay rents and related expenses.

Advocates for tenants say the distribution of the money has been slow and that more time is needed to distribute and repay landlords. Without an extension, they feared a spike in evictions and lawsuits seeking to boot out tenants who are behind on their rents.

As of June 7, roughly 3.2 million people in the U.S. said they face eviction in the next two months, according to the U.S. Census Bureau’s Household Pulse Survey. The survey measures the social and economic effects of the coronavirus pandemic every two weeks through online responses from a representative sample of U.S. households.

Here’s the situation in Nevada:

WHAT’S THE STATUS OF EVICTION MORATORIUMS IN THE STATE?

Gov. Steve Sisolak’s executive order putting a moratorium on evictions for those unable to pay expired on June 1, leaving the Center for Disease Control and Protection’s moratorium as the final bulwark against eviction for struggling renters. The moratorium covered tenants who were unable to pay rent, but it allowed landlords to purse other kinds of evictions, for example no-cause evictions or lease violation evictions.

State and local governments have been allocated $365 million in federal coronavirus aid for rental assistance, according to the Nevada Treasurer’s Office. The aid is available to tenants and households with less than $99,000 in annual earnings, and approved funds are sent directly to landlords.

Officials have aggressively sought to publicize assistance programs because dollars that aren’t spent will revert to the federal government and, once evicted, tenants become ineligible.

HOW ARE THE COURTS HANDLING EVICTION HEARINGS?

Nevada is the only state in the U.S. with a summary eviction system in which the burden of initiating court proceedings falls on tenants, not landlords. Renters aren’t granted court hearings unless they file challenges to eviction notices, meaning evictions can be carried out without court oversight and tenant protections only go to those who know and avail themselves of them.

Advocates say the policy has limited the effectiveness of pandemic-eviction protections in comparison with other states.

In some states, the federal moratorium’s references to “nonpayment of rent” are seen as a catch-all to prevent many kinds of evictions. In Nevada, the words “non-payment of rent” are used in state eviction laws, leading some judges to interpret federal guidelines narrowly and still allow for “no-cause” evictions, for example, for tenants with month-to-month leases who can’t pay their rent.

To prevent overwhelming courts with an onslaught of eviction cases, lawmakers last summer created a program to provide 30 days for landlords and tenants to pursue third-party mediation.

WHAT IS THE AFFORDABILITY IN THE STATE’S MAJOR RENTAL MARKETS?

Nevada, where nearly 45% of the population rents, ranks as the worst state in the U.S. for poor people seeking housing. A study of 2019 census data conducted by the National Low Income Housing Coalition concluded
there are only 20 affordable and available units for every 100 extremely low-income renters in the state.

Home prices and median rents have skyrocketed in the Reno and Las Vegas areas.

As of May, the median monthly rent in the Las Vegas-Henderson-Paradise region had risen 12.2% over the last year to $1,340, according to a report released June 16 by Realtor.com. Only seven metro areas saw larger spikes over the duration.

ARE EVICTIONS EXPECTED TO CREATE A SURGE IN HOMELESSNESS?

In Nevada, about 6,900 people experience homelessness on any given night, according to a January 2020 study.

Experts aren’t sure how much the lifting of the federal moratorium will exacerbate housing insecurity. One indication of the scope of the problem is census data showing more than 42,000 state residents are concerned that they could be evicted over the next two months.

Bailey Bortolin, policy director of the Nevada Legal Aid, said making it harder to evict tenants who have pursued rental assistance will to some extent insulate Nevada from a potential surge. But she still worries about vulnerable renters navigating the complexities of the eviction process on their own and finding the resources they are eligible for.

“At the end of the day, people are in crisis, and navigating our eviction legal processes for people in crisis has never been easy or accessible — and that has only been made harder by the pandemic,” she said.