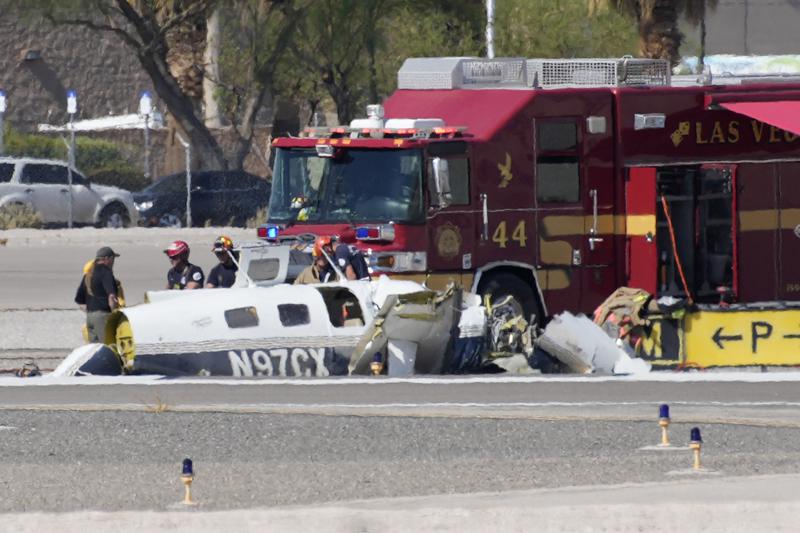 A National Transportation Safety Board diagram of the July 17 crash clearly shows the paths of a Piper PA-46 from Coeur d’Alene, Idaho, with two people aboard, and a Cessna 172 with an instructor and student pilot, come together at North Las Vegas Airport.

The Clark County coroner found the two people on the Piper — Donald Stuart Goldberg, 82, and Carol Ann Scanlon, 76 — died of trauma injuries before their aircraft wreckage burned. Their deaths were ruled accidental.

Rulings on the causes of deaths are pending for Cessna student pilot Zachary Rainey, 46, of North Las Vegas, and instructor Anthony Chiaramonti, 40, of Las Vegas.

The Piper carrying Goldberg and Scanlon from Idaho had been cleared to land on runway 30L, the left of two parallel south-to-north runways at the busy airport, which in 2019 handled an average of more than 280 mostly general aviation and air taxi light aircraft a day.

The Piper banked to the left and the Cessna banked to the right to approach the runway on the right, labeled 30R. The two aircraft collided about noon just a quarter- from the end of 30R and crashed. The Piper caught fire and burned.

The NTSB report makes no conclusions about the cause of the crash. Final reports and safety recommendations from the independent federal investigations panel can take months.

However, the report made it clear the Piper had been cleared to land on runway 30L, and described the last transmission from the pilot of the Piper telling the airport controller, “yeah affirmative runway three zero left that’s what I heard.”

Records showed the Piper was owned by Gold Aero Aviation LLC of Tampa, Florida, where contact information was not immediately available.

Matthew Binner, owner of the Cessna and a flight school called Airwork Las Vegas, did not immediately respond Friday to messages about the NTSB report.