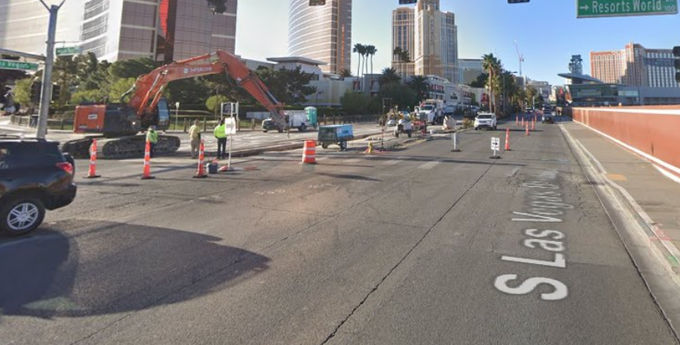 ﻿Las Vegas, NV (KXNT) - Traffic on Las Vegas Boulevard between Spring Mountain and Sahara will be down to one lane in each direction at various locations and times on Tuesday and Wednesday due to ongoing repaving.

#TrafficAlert: Las #Vegas Blvd. between Spring Mtn. and Sahara reduced to one in each direction from 2am Tuesday until 5pm Wednesday as work continues on a major Strip construction project. Expect delays, consider alternate routes. #VegasTraffic 🚧https://t.co/BcLEHjWPKX pic.twitter.com/pzf1h0qiJJ

The lane reductions will be went into effect on Tuesday at 2am and will stay in place until 5 p.m. Wednesday.

.#TrafficAlert Las Vegas Blvd. between Sahara and Spring Mountain is down to one lane in both directions till 5pm on Wednesday. The road improvement project will continue into the fall. #LasVegas @8NewsNow #8NN Use caution in this #conezone area 🚧🚦🚗🛻🚌🚙🚦🚧 pic.twitter.com/kTOrBelAq7

The lane restrictions are needed for the contractor to replace the asphalt pavement and striping on the Strip.

The work that’s being done is part of a construction project that will continue to affect Las Vegas Boulevard from Spring Mountain to Sahara through the fall.

This project is the first of seven phases of work along Las Vegas Boulevard between Sahara and the 215 Southern Beltway. Each phase includes water line replacement, new pavement, intersection modifications to improve pedestrian crossings, upgrades to traffic signal and street lighting systems with Smart poles and enhanced median landscaping with LED lighting.

Work on the next phase, which will largely be on the Boulevard between Russell Road and the 215, began last month.