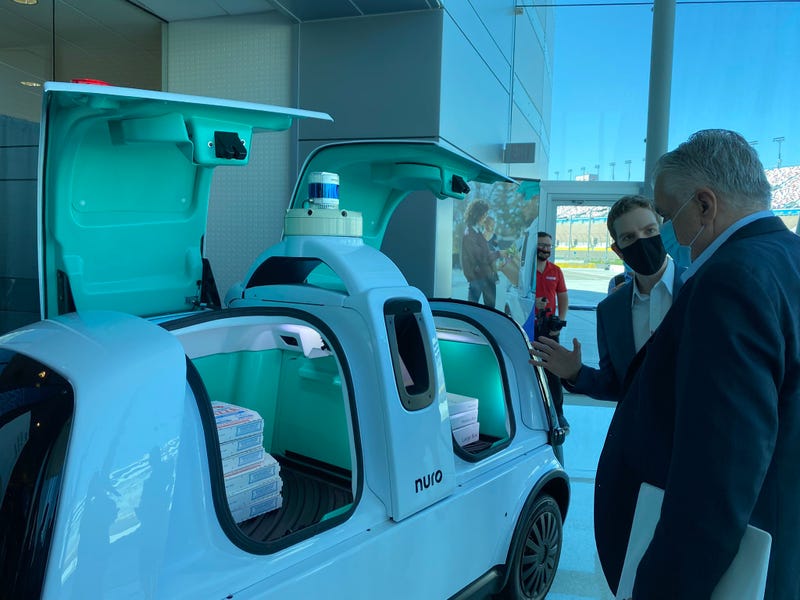 Today we welcomed @nurobots to the State of Nevada. Thank you to @SenJackyRosen, @DiversifyNevada and so many others for joining us for this hands-on event!

Autonomous vehicles are estimated to created up to 3.4 million new jobs over the coming decade. pic.twitter.com/Yt4VMXnN3T

Nuro, a firm founded in 2016 and based in Mountain View, California, announced it will build an end-of-line manufacturing facility and a closed test track at the Las Vegas-area raceway for the company’s next-generation autonomous vehicle.

Gov. Steve Sisolak and U.S. Sen. Jacky Rosen joined Nuro co-founder Jiajun Zhu to announce the project, which in March received about $170,500 in tax abatements over 10 years from the Nevada Governor’s Office of Economic Development.

Nuro is looking to partner with community colleges & career training programs, among others, to ensure we have a talent pipeline in Nevada for these jobs.

This is how we build healthier families, healthier communities and continue toward a full economic recovery. pic.twitter.com/KCJpixW1hh

Zhu pointed in a statement to partnerships his company has with pizza giant Domino’s, supermarket owner Kroger and delivery company FedEx, and operating in California’s Silicon Valley, Houston and the Phoenix area.

“We are now able to invest in the infrastructure to build tens of thousands of robots,” he said.
Sisolak pointed to a company promise that a $10 million capital investment will create 250 skilled tech-sector jobs during the next decade in southern Nevada.

The remaining $30 million investment would go toward long-term leases at the manufacturing and testing sites. Sisolak said the project could generate $2.2 billion in total economic value over 10 years.

The company received National Highway Traffic Safety Administration authorization in February 2020 to test up to 5,000 of its R2 autonomous robots delivering pharmacy items in Houston and groceries in Scottsdale, Arizona. The vehicles have package compartments, four-wheels, no pedals and no steering wheel.

Nuro said it intends by next year, with help from Los Angeles-based truck and bus builder BYD North America, to produce its third-generation autonomous vehicle at the Las Vegas facility. It said the 80-acre site will be the first end-of-line manufacturing facility for autonomous delivery vehicles in the United States.