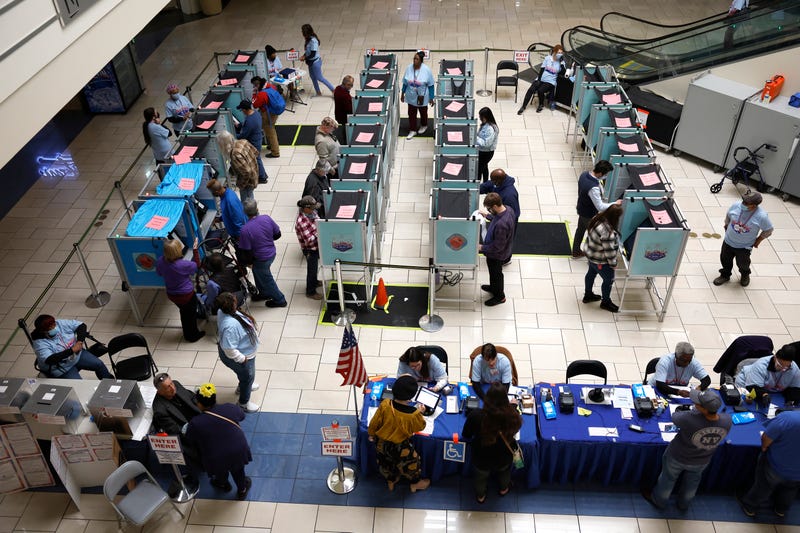 Las Vegas, NV (AP) - Critical races in Nevada, including one that could determine control of the U.S. Senate, were too early to call amid a plodding vote count that could last into next week.

Sen. Catherine Cortez Masto, a Democrat, is fending off a challenge from Republican Adam Laxalt. Democratic Gov.Steve Sisolak is in a tight race for reelection against Las Vegas Metro Police Sheriff Joe Lombardo and three House seats are in limbo.

With a significant number of mail-in ballots still to be counted, both Republicans and Democrats in the high-profile Senate and governor’s races have urged supporters to be patient. County election clerks will count mail ballots received until Nov. 12 as long as they were postmarked by Election Day. Officials have until Nov. 17 to finish the counting and submit a report to the Nevada secretary of state’s office, according to state law.

“Our positive energy got us here today, and our positive energy is going to continue to flow this week,” said incumbent Cortez Masto from a Democratic watch party on the Las Vegas Strip Tuesday night. She was in a tight race with Laxalt, a conservative who has blamed inflation and illegal immigration on Democratic policies.

Voting officials in Clark and Washoe counties warned it would take days to process the mail-in ballots.

In Clark County, every vote cast in person on Election Day has been counted except for 5,555 provisional ballots that still need to be reviewed, Clark County Registrar of Voters Joe Gloria said Wednesday morning.

But more ballots are pouring in. The county received nearly 15,000 ballots Monday and Tuesday that will be counted Wednesday and another 12,700 arrived by mail on Wednesday that won’t be counted until at least Thursday. County election officials are also working on processing a “considerable amount of drop boxes we received that held a considerable amount of ballots” from Tuesday, Gloria said.

Hundreds of staff are working to process ballots as quickly as possible, and “every piece of equipment that we have available to process mail will be in use,” Gloria said.

The counting will continue through Veteran’s Day and the weekend. For any ballots that need a “cure” — which can occur if the signature on the ballot envelope doesn’t appear to match the voter’s signature on file — voters will have until the close of business on Monday to fix the matter, Gloria said.

“There’s no holidays for us,” Gloria said.

By Wednesday morning, only one of four Nevada House races had been decided. Six-term Republican Rep. Mark Amodei easily defeated Elizabeth Mercedes Krause in Nevada’s rural northern district where no Democrat has ever won.

The 2nd Congressional District was considered the only safe seat for either party among the four in the western battleground of Nevada, where three incumbent Democrats faced stiff challenges.

In rural Nye County, the interim clerk had to stop hand-counting ballots until after polls closed Tuesday. The county’s controversial plan to start counting early made it one of the first jurisdictions nationwide to act on election conspiracies related to mistrust in voting machines.

County officials were halted after two days by Nevada Secretary of State Barbara Cegavske until after polls closed because of fears that election results could be released before many voters had even gone to the polls.

While Nye County used Dominion voting machines to count and certify its election results, interim clerk Mark Kampf said Wednesday that he planned to resume hand-counting Thursday, though he acknowledged it would be a tight turnaround, saying the state’s Nov. 17 deadline “does not leave us much time.”