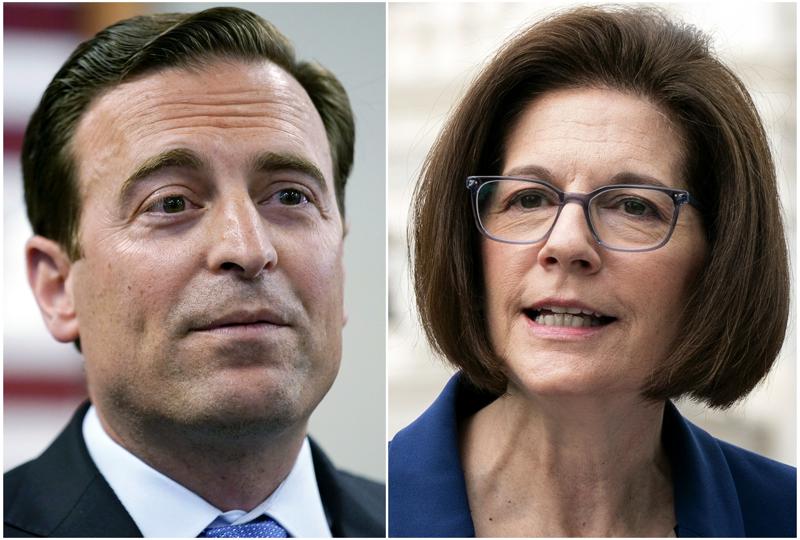 Reno, NV (AP) - A frenzied race for Nevada’s U.S. Senate seat is shaping up to be one of the closest in the country and both candidates hope their messages on abortion, immigration, inflation or public safety will tip the balance in their favor.

The stakes for Democratic U.S. Sen. Catherine Cortez Masto and Republican challenger Adam Laxalt are especially high. The winner could determine which party controls the Senate and the GOP considers Nevada one of its best opportunities to turn a blue seat into red.

The race has become increasingly neck-and-neck in recent weeks, with many polls showing the candidates just a percentage point or two apart. As Election Day draws near, both are continuing to follow the same campaign playbooks as their national parties, with Cortez Masto rallying voters around threats to abortion access and Laxalt focusing on the economy.

“We don’t need any more male politicians telling women what we can and can’t do with our own bodies,” Cortez Masto wrote in a post pinned to the top of her Twitter account in September. She has echoed the refrain in several campaign ads, contending Laxalt would support increased abortion restrictions — and perhaps a nationwide ban — if elected to Congress.

Laxalt, meanwhile, has the endorsement of the anti-abortion group National Right to Life and has called himself “pro-life.” In a June news release, Laxalt called the U.S. Supreme Court’s decision overturning Roe v. Wade “a historic victory for the sanctity of life.”

He has said the change is “settled law” because Nevada voters had already made abortion legal, but he also expressed support for a referendum that would restrict abortion after 13 weeks instead of the 24-week limit currently allowed by the state constitution.

If the Republican Party can flip just one Senate seat, they will win control of the chamber, along with the power to control judicial nominations and policy debates through 2024.

Still, Laxalt’s campaign has worked to keep the focus on issues like immigration and the economy rather than abortion. He has repeatedly cited rising gas prices and inflation as reasons voters should choose him over Cortez Masto.

“At some gas stations in Reno, gas prices have soared to $7 per gallon,” his campaign wrote in an early October news release. The statement attempted to pin the prices on Cortez Masto’s votes on energy issues, such as her efforts to limit oil and gas leasing on lands with “low or no” potential for development.

Cortez Masto is a member of the Senate Energy and Natural Resources Committee, as well as the finance, Indian affairs and banking, housing and urban affairs committees.

Both candidates have used their experience as former attorneys general — Laxalt from 2015 to 2019 and Cortez Masto from 2007 to 2015 before becoming senator in 2017 — to demonstrate their support for law enforcement.

Laxalt has been endorsed by the Nevada Fraternal Order of Police and the Public Safety Alliance of Nevada. Cortez Masto has the endorsement of the Nevada Police Union, the Nevada Law Enforcement Coalition and the Nevada Association of Public Safety Officers.

In early October, Cortez Masto announced she helped to secure more than $21 million in federal funding that would go to police departments, state government agencies and tribes to boost law enforcement efforts and criminal justice programs.

They have each have sought to court veterans, with Laxalt highlighting his service as a U.S. Navy judge advocate general in Iraq and an assistant professor of law at the U.S. Naval Academy. Cortez Masto has talked about legislation she helped get through Congress, including a bill guaranteeing health benefits and compensation for veterans exposed to Agent Orange and others to protect VA benefits for student veterans and improve access to mental health services.

Cortez Masto has had a hugely successful fundraising campaign, raising more than $44 million and spending all but about $5 million by the end of September, according to OpenSecrets, an organization that tracks campaign finance and spending data.

Laxalt brought in more than $13 million and spent about $9 million during the same time period but was aided by an influx of political action committee funding. Outside groups spent more than $39 million opposing Cortez Masto and roughly $29 million opposing Laxalt, according to OpenSecrets.

Some of that money focused on Spanish-language advertisements. The spending was an attempt to sway Latinos, who account for roughly four in 10 Nevada residents. Cortez Masto became the first Latina elected to Congress in 2016.

Nevada has rejected every GOP presidential candidate since 2004, but by increasingly narrow margins. In 2020, President Joe Biden won by only 2.4 percentage points.

Laxalt has close ties to Trump. He co-chaired Trump’s 2020 reelection campaign in Nevada and later promoted lies about the election, spearheading legal challenges to the vote-counting process. Trump has visited Nevada twice to stump for Laxalt and GOP gubernatorial candidate Joe Lombardo, who is running against Democratic Gov. Steve Sisolak.