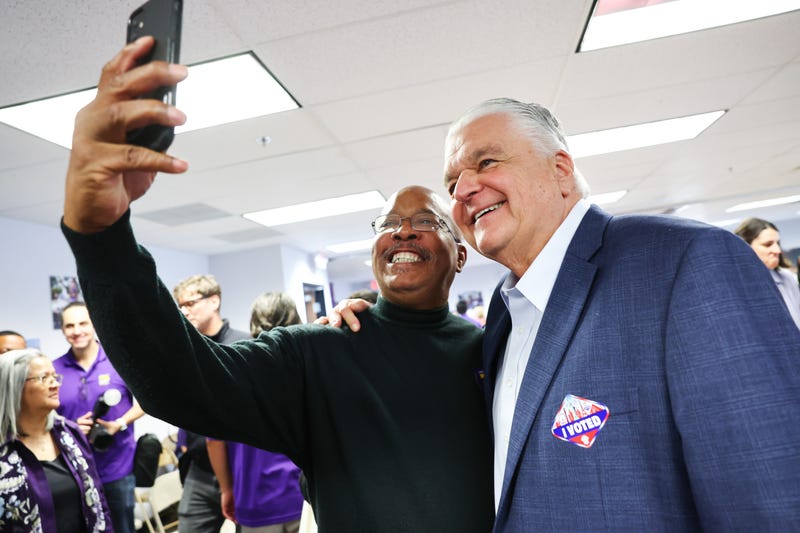 “We don’t know anything yet,” Lombardo told cheering supporters at a Republican party at a Las Vegas casino-resort. He noted he was also marking his 60th birthday, and called the race with Sisolak “razor thin.”

The last polling sites in the state closed in Las Vegas and Reno after 9 p.m. Tuesday, and Sisolak soon told election night supporters at the Encore resort on the Las Vegas Strip they could go home because the race was too close to call.

“We said it was going to be close and it is,” Sisolak said. ”We ask you to please be patient. We need to make sure every single vote is counted. When that job is done, I believe we’re going to win this thing.”

Lombardo said he anticipated success “in the next couple of days,” but told supporters “to be patient.”

The campaign was costly and contentious, with airwaves and the internet awash in recent weeks with ads sponsored by the candidates, their parties and political action committees aiming to amplify their differences.

Roughly three-fourths of Nevada voters say things in the country are heading in the wrong direction, according to AP VoteCast, an expansive survey of more than 2,200 voters in the state.

The economy was at the top of many Nevada voters’ minds, with about 5 in 10 calling it the most important issue facing the country. Immigration, abortion, crime and climate change followed behind, with about 1 in 10 voters naming each of those their top issue.

Voters view the economy negatively, with nearly 8 in 10 saying economic conditions are either not so good or poor. Only about 2 in 10 call the economy excellent or good. And about a third of voters say their family is falling behind financially.

About 5 in 10 called inflation the single most important factor in deciding how to vote, according to the survey. But Nevada voters were about evenly split over whether they think inflation is due to President Joe Biden’s policies or factors outside his control.

The Supreme Court’s decision overturning Roe v. Wade, the 1973 ruling that recognized a constitutional right to abortion, also played a role in most voters’ decisions, with nearly 8 in 10 calling it a factor in how they cast their ballot. About a quarter call it the single most important factor in their vote.

Only about 4 in 10 Nevada voters say they approve of the way Biden is handling his job, according to VoteCast.