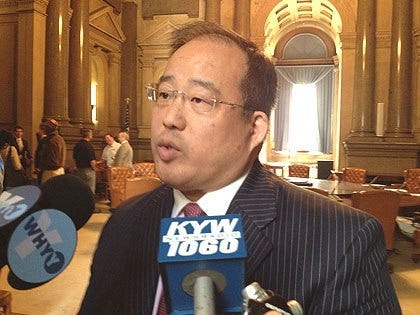 PHILADELPHIA (KYW Newsradio) — Philadelphia City Hall is buzzing about the Local 98 indictment, but very few people are talking to reporters.

Councilman Henon is not in his office, but his staff is handing out a statement from him that begins, "I have done nothing wrong."

It goes on to defend his work both for Local 98 and his council district, asserting he always put his constituents first, and concluding that he will continue to serve and looks forward to clearing his name.

Most of his colleagues have been unavailable or declined comment. One exception was David Oh — who makes a cameo appearance in the indictment as the councilman who proposed an audit of the parking authority, which Henon allegedly stalled at Dougherty's request.

"Everyone is innocent unless proven guilty," Oh said. "That's they way it is in America. I believe that for everyone, I don't care which side of the political aisle or who they are."

Oh seemed amused that his non-binding resolution — which council did eventually pass — took up four pages of a federal indictment, but he says it does underscore something odd.

"Why the Parking Authority is so protected in this building raises a lot of questions and creates a lot of problems," he said.

RELATED: Kenney 'sad' about Local 98 indictment, says it has nothing to do with him

Council President Darrell Clarke has also released a statement, saying the charges against Henon are grave and he hopes they're not true, but that Henon has a right to defend himself. And, absent a disqualifying offense, his term should be determined by the people he serves.

The people of Philadelphia deserve better days than this. My statement: pic.twitter.com/9ebeUZzJfC

This is an election year for City Council.