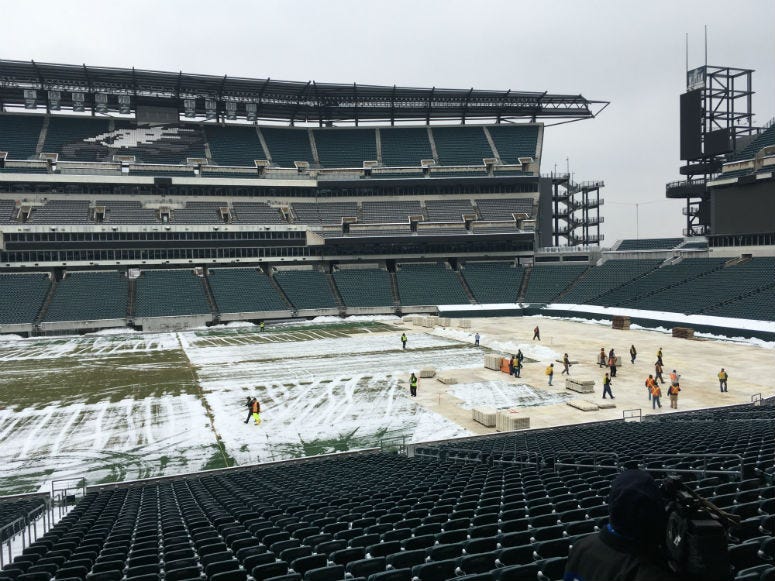 PHILADELPHIA (KYW Newsradio) — Crews have arrived at Lincoln Financial Field to build a hockey rink for the Flyers' outdoor game there.
Outside the Linc, a 53-foot chiller unit is parked. Inside, while interlocking floor sections are placed over the turf, crews are running pipes that will connect the chiller with the hockey rink being constructed on what's normally a football field.

Crews at the Linc begin work to connect the ice chiller to the hockey rink being built for the outdoor @NHLFlyers game on 2/23 #StadiumSeries pic.twitter.com/SEWJ7Ox4z9

It's the start of 12 days of preparations for the Flyers' outdoor showdown against the Pittsburgh Penguins on Feb. 23.

The NHL's senior manager of facilities and hockey operations, Derek King, says that unit will pump 3,000 gallons of glycol refrigerant into aluminum trays on the field. From there, for a week, water will be sprayed on to the cooling trays to create the ice.

"For the next four days, we'll do our pipe run all the way down to the field. And as long as things go on schedule, Thursday evening we look to start making ice. And that'll take us about seven days to get our sheet done, and it'll be ready for practice day on Friday," King said.

It's just a football field now, but crews are beginning to build the footprint of a hockey rink for the @NHLFlyers outdoor game on 2/23 #StadiumSeries pic.twitter.com/2wzVMvR2mY

The ice on an indoor rink is about an inch-and-a-quarter thick.

But King says the outdoor ice will be about two inches thick for extra stability.