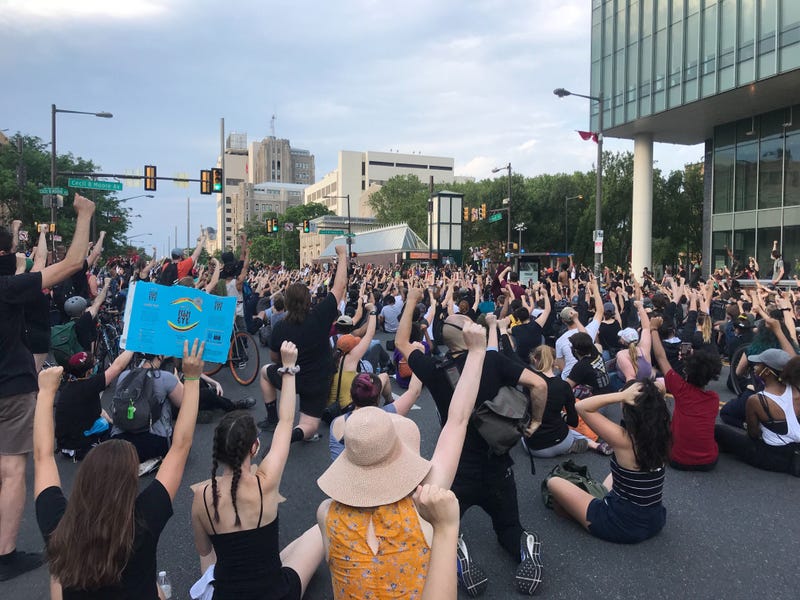 PHILADELPHIA (KYW Newsradio) — A large group of protesters gathered Wednesday in Philadelphia to continue demonstrating for a fifth straight day.

The statue of Former Mayor Frank Rizzo was removed by the city in the middle of the night  — on Saturday, the first day of the protests, demonstrators had set the base of the statue on fire.

Hundreds marched peacefully from the where the Rizzo statue once stood in front of the Municipal Services Building around City Hall and down Broad Street, with signs reading statements like “Black Lives Matter” and “Justice for Floyd.”

Many like Jordan say the recent changes that took place on Wednesday were a great step in the right direction, but it's not enough.

“I think that's a wonderful first step in Minneapolis right now, but I think we need broader systemic reforms, and there's so many others — Breonna Taylor, we need justice for her. We could get retroactive justice for Eric Garner, for Philando Castile, for so many others” he said.

The protest ended with a prayer in the evening.

Organizers have plans to meet for another day of marching on Thursday at the Art Museum.

A citywide curfew has been put into effect again from 6 p.m. Wednesday until 6 a.m. Thursday.