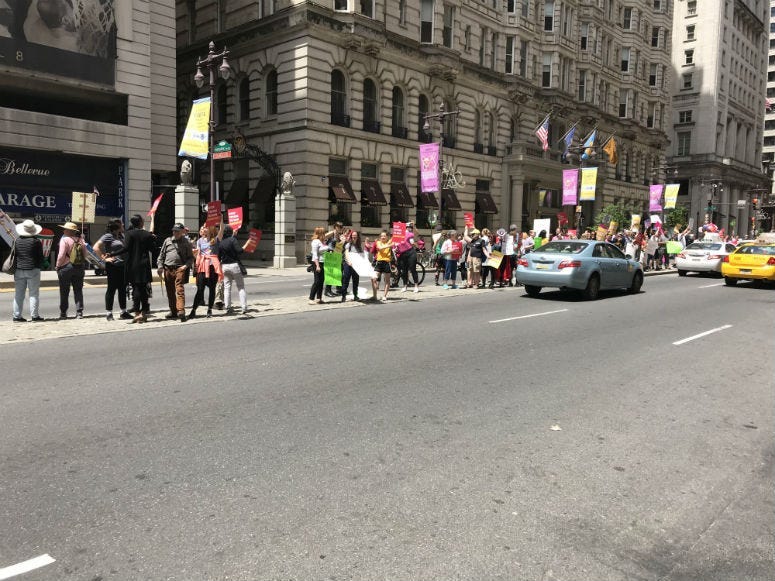 PHILADELPHIA (KYW Newsradio) — Pro-choice advocates took to the streets of Philadelphia Tuesday as part of a nationwide day of action. The goal was to condemn restrictive anti-abortion laws recently passed in eight states.

Passing cars and trucks beeped their support as about a hundred people rallied on Broad Street between Locust and Walnut streets for women's right to choose. The effort was part of the "Stop The Bans" action organized by Planned Parenthood.

Dorothy Daub-Grossman was one of those on the median strip, rallying against restrictive abortion laws.

"Even though I'm 65-years-old, I'm just sick and tired of men trying to rule our bodies. I'm exhausted by it. I've been marching since the early 70s, and it looks like it's not going to stop until it stops," Daub-Grossman said.

Liz McCaffrey of Ardmore says Pennsylvania is not one of the states that has banned abortion, but it's getting close.

"Pennsylvania is a very conservative state and we have to worry. They tried to pass a law banning abortion for Down syndrome babies, I mean it's just awful," she said.

That bill was approved in the Pennsylvania House.

Danitra Sherman, state field director for Planned Parenthood, says House Bill 321 was not about Down syndrome but an effort to put more restrictions on legal abortion in Pennsylvania.

She says those who support that bill are on notice.

"Elections do matter, and when it's time for folks to be up for reelection, that people will turn to the polls and make sure they are not in that place anymore," Sherman said.