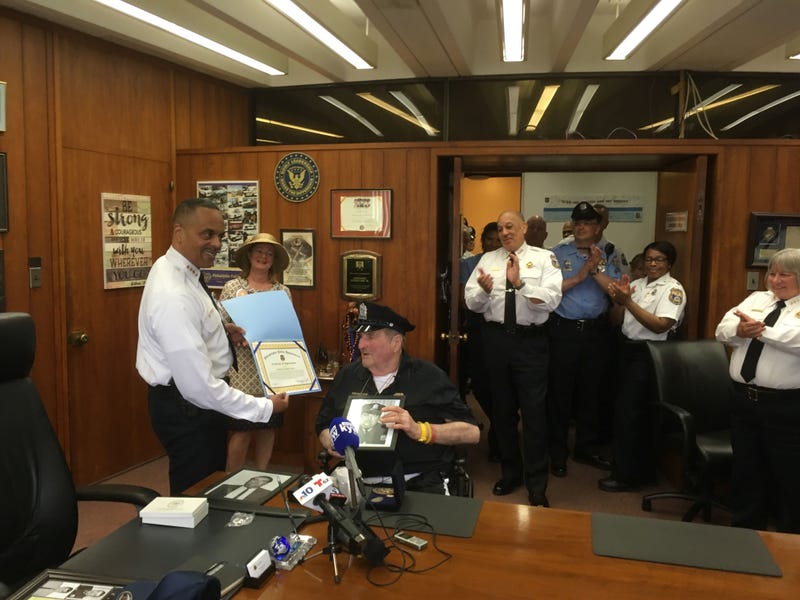 Vasso, an 82-year-old retired Philadelphia detective, was escorted by the Highway Patrol from his nursing home in Hatboro, all part of an arrangement with Bucks County-based nonprofit Twilight Wish Foundation, which celebrates the lives of seniors.

Now a double amputee, but still alert with a quick and friendly wit, Vasso was delighted to spend some time with Commissioner Richard Ross. Vasso became an officer in 1958, serving some time under Commissioner Frank Rizzo. He retired in 1982.

Now, he's on the receiving end of a table full of keepsakes. Ross, with a big smile on his face, gifted Vasso a framed listing all of his assignments alongside photos of him in uniform, plus a Philadelphia police cap, coffee cup — even cufflinks.

Retired police detective Al Vasso, now confined to a wheelchair, gets a @Twilight_Wish granted, by revisiting the @PhillyPolice Headquarters - the Roundhouse - 37-years after he left it. pic.twitter.com/0qXW8uQy4r

"I don't know how you're going to rock them," Ross said. "We've all got relatives or friends that blazed a trail before us. It's just an honor for us, through this small little thing, to demonstrate that we don't forget. We appreciate your service."

.⁦⁦@PPDCommish⁩ Richard Ross greets 82-year old Al Vasso, who was with ⁦@PhillyPolice⁩ between 1958-82, after his wish to visit the Roundhouse one more time was granted by ⁦@Twilight_Wish⁩ pic.twitter.com/FJaydOZHpT

The Police Department was able to pull his old badge number, and Vasso proudly wore it on a lanyard around his neck. He received several commendations throughout his career.

"I did get shot with two bullet holes in the line of duty," he recalled. "You're always out there, and on the line. A lot of people love you, but some say all police do is eat doughnuts. It's not like that. We even deliver babies. I delivered two babies. I did all of that."

Although the Twilight Wish Foundation has orchestrated 3,100 Twilight Wishes across the country over the last 15 years, founder Cass Forkin noted this one was special.

"I am already tearing up on this one," she said. "When police are honoring their own, one of their finest, they're actually honoring themselves in the future. They see that what they're doing here will not be forgotten."

Among the thousands of wishes, Vasso is the first police officer in an elder care facility to get a wish fulfilled.