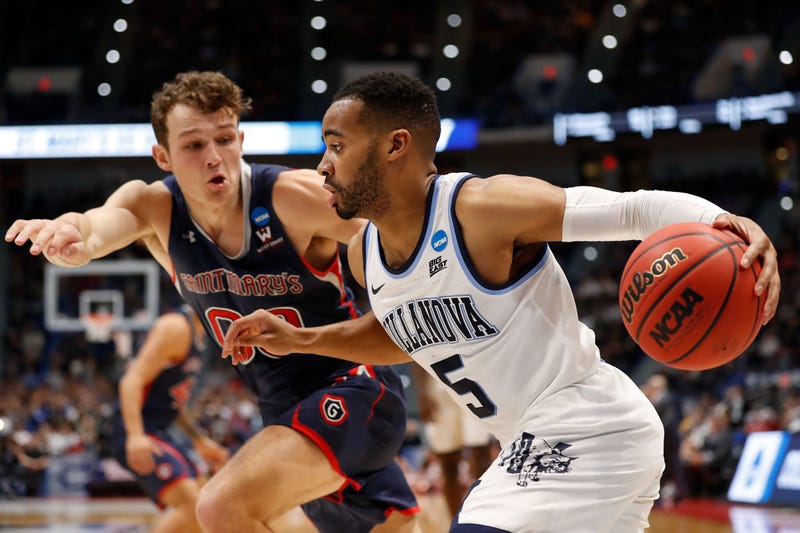 HARTFORD, Conn. (KYW Newsradio) — Nothing will come easy for the Villanova Wildcats, the defending champ in the 2019 NCAA Tournament.

The Cats survived a first-round upset against the Saint Mary's Gaels with a 61-57 victory — one that needed a 12-3 rally to start the second half. The Gaels led by two at the break.

"Man, are they good," head coach Jay Wright told reporters at XL Center in Hartford, Connecticut after the game. "It is just so impressive to play against them. How disciplined, how well-coached, how they execute. Everything we try to do defensively, they got an answer for. They're really good. That team just beat the No. 1 team in the country (in Gonzaga) and pretty handily, and it was no surprise to us that it was that difficult of a game, so we give them a lot of credit."

"The tempo was excruciating," Wright said. "It's much harder to speed up a game than it is to slow down a game. They're such a good passing team. They're so skilled that if we tried to speed it up, it was just going to give them too many open shots. They're a great three-point shooting team."

But in the end, Villanova's defense prevailed, and seniors Phil Booth and Eric Paschall did what they usually do: Lead the way. Booth scored a game high 20, despite taking only two three-point shots, and Paschall contributed with 14.

"Our young guys are growing, but we have two seniors that just do everything for us on and off the court," Wright added. "We're so lucky to have them."

One of the "young guys" who shined was sophomore Jermaine Samuels. He chipped in with 12 points, including some emphatic dunks. Wright called Samuels the team's most improved player, and that improvement will need to continue Saturday night against three-seeded Purdue, which beat Old Dominion 61-48.

The Boilermakers went 23-8 in the regular season and 16-4 in the Big 10, before losing to Minnesota in their conference tournament.

Villanova is young, but their seniors were there for two national championships. Not to mention, a decent amount of the "young guys" witnessed last season's title, even though their roles were small. That experience can go a long way to carrying six-seeded Cats past Purdue, with a trip to the Sweet 16 on the line.

"Teams that have NCAA Tournament experience and have guys on their team — even if they don't play, they have an advantage," Wright said.

Saturday night's tip-off from Hartford is scheduled for 8:40 p.m.

music
The CW revives 'Legends Of The Hidden Temple,' now for adults
news
6 podcasts to help you make the most of your money
news
WATCH: ‘78-years-young’ retiree walks stage to get college diploma
news
Gas prices expected to take roller coaster ride in coming weeks
news
Camping season is here — Check out the best tents you can buy in 2021
news
WATCH: Fisherman gets chased by alligator after reeling it in thinking it was a fish