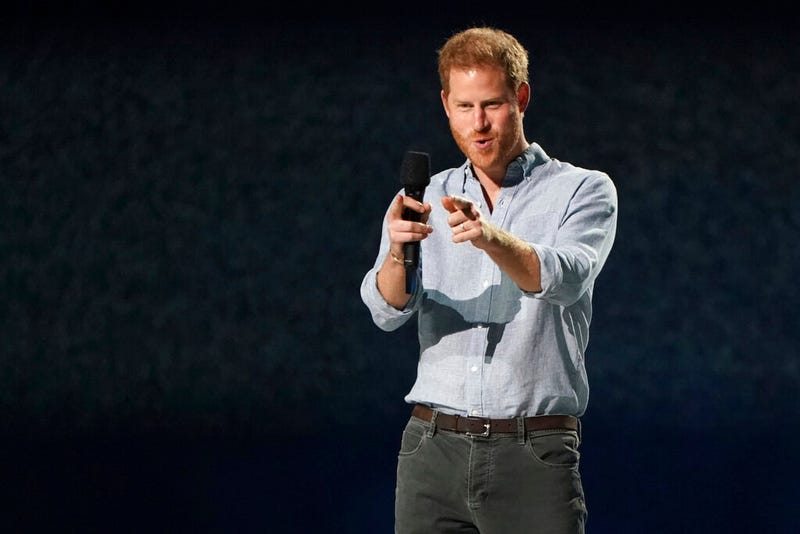 Prince Harry, Duke of Sussex, speaks at "Vax Live: The Concert to Reunite the World" on Sunday, May 2, 2021, at SoFi Stadium in Inglewood, Calif. ( Photo credit (Photo by Jordan Strauss/Invision/AP)
By Rebekah Sager, KNX 1070

For the first time in more than a year, Los Angeles hosted a major event for more than 20,000 people. In this case, it was “Vax Live: The Concert to Reunite the World."

The per-recorded concert/fundraiser took place at Inglewood’s new SoFi Stadium, and the entire audience was made up of essential workers.

President Joe Biden spoke and musicians such as the Foo Fighters, Jennifer Lopez, Eddie Vedder, H.E.R., and J Balven, all played to an entirely vaccinated crowd inside the stadium.

The concert was put on by Global Citizen, and urged wealthy countries to give extra vaccines to places that are desperately in need of them, such as India and South Africa.

“The vaccines are safe. I promise you. They work,” said Biden, who was accompanied in a video message with first lady Jill Biden. Both appeared as part of the “We Can Do This” initiative to increase confidence in COVID-19 vaccines.

“We’re working with leaders around the world to share more vaccines and boost production to make sure every country has the vaccines they need,” the president continued. “If we get this done, we won’t have to miss another moment.”

Prince Harry said providing vaccines across the globe is imperative, particularly those in the poorest countries. He said that he is standing solidarity with India, who is experiencing a “devastating” second wave of the virus.

“The vaccine must be distributed to everyone everywhere,” the Duke of Sussex said. He along with his wife Meghan are leading an effort to raise money for the vaccine-sharing program COVAX, which hopes to produce $19 billion to pay for the vaccines for medical workers.

“We cannot rest or truly recover until there is fair distribution to every corner of the world,” he said. “The virus does not respect borders and access to the vaccine cannot be determined by geography.”

“Many of us had to stay home, but you all didn’t have a choice,” the singer said. “You set an example for all of us, both in how you stayed on the job and that we need to get vaccinated as soon as possible.”

20k+ essential workers, all vaxxed, at #SoFiStadium for #VaxLive concert with #FooFighters #JLo #EddieVedder #HER. Goal: to get everyone vaxxed & help other countries get vaccines. @KNX1070 pic.twitter.com/WyYPFgDVbt

“We ain’t out the woods yet. But let me tell you, I’m a firm believer and idea that music should be shared with people,” Foo Fighters frontman Dave Grohl said. “Let’s work as hard as we can to make sure we can do this every night.”

Hugh Evans, founder and CEO of Global Citizen, said he wants to keep the momentum going.

“What were trying to highlight is the obvious that we should be fighting for equity,” he said. “It’s something that shouldn’t require any arithmetic. It is absolutely bleeding obvious.”

Associate Press contributed to this story.