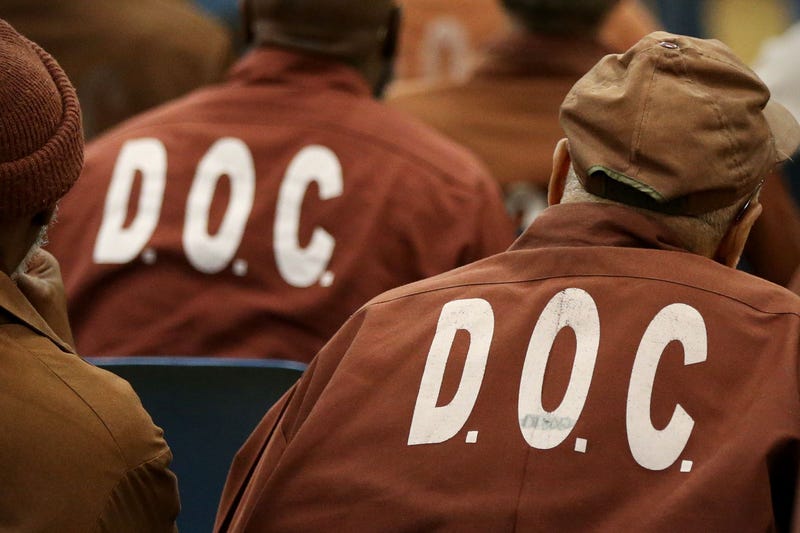 Inmates listen during an information session about the commutation process at SCI Dallas in Dallas, Pa., on Thursday, Oct. 10, 2019. Lt. Gov. John Fetterman urged the audience of about 200 inmates, many with life sentences, to apply for commutation even if they have been denied in the past. Photo credit Tim Tai/Philadelphia Inquirer
By Spotlight PA

HARRISBURG — Month after month, Pennsylvanians cite their safety and related topics — crime, guns, drugs, and violence — as one of the top problems facing the commonwealth.

These concerns have colored this year’s governor’s race, in which candidates have discussed curbing violent crime and fighting inequities based in the justice system.

Below, we break down what Pennsylvania’s criminal justice policy would look like under the two top candidates — Democratic nominee Josh Shapiro, the state’s current attorney general, and Republican nominee Doug Mastriano, a state senator — vying to be the next governor.

In Pennsylvania, people serving life in prison do not have any opportunity for parole, a policy that has increasingly strained resources at state prisons as incarcerated people get older and require more medical care. Lawmakers from both parties seek policy solutions that would reduce prison populations and provide more opportunities for people who do not pose a danger to the public to leave prison.

Though he doesn’t sit on the Board of Pardons, the governor ultimately signs off on all recommendations for clemency. And any legislative changes must be approved by the governor to avoid a veto.

As attorney general, Shapiro sits on the pardons board, where an applicant must receive majority support to get their crime pardoned or unanimous support to get a life or death sentence commuted. Shapiro has said he believes in second chances and that politics don’t factor into the decisions he makes when considering a case.

He has typically taken a moderate approach to pardons but at times has cast the lone no vote against a candidate with otherwise wide support, actions that activists and other board members have criticized.

Shapiro supports changing the rules to allow the board to approve a commutation for a life sentence by a simple majority rather than a unanimous vote. He also supports amending Pennsylvania law to get rid of mandatory life sentences for “felony murder” — a charge that allows participants in a felony to be charged with a person’s death even if they did not play a direct role — and expanding access to parole for people serving life sentences who, because of age or illness, are likely to die in prison.

Mastriano has generally taken a “tough on crime” approach on the campaign trail, telling supporters at events he favors harsher penalties for people convicted of violent crimes.

He has railed against Philadelphia District Attorney Larry Krasner, who is the subject of an impeachment attempt by Republicans in the Pennsylvania legislature who argue his policies, which favor low bail and lighter sentences for some crimes among other things, have contributed to Philadelphia’s high homicide rate. (The reality is more nuanced, as homicide rates have risen since 2020 across the country.)

Mastriano, on his campaign website, pledges to “keep violent criminals behind bars where they belong.” 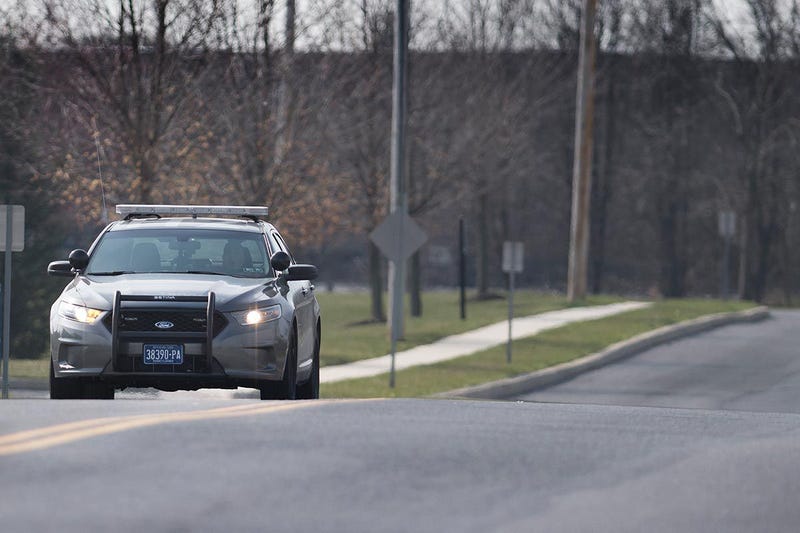 Democratic Gov. Tom Wolf signed an executive order creating a statewide police oversight commission. Whether the commission continues its work hinges on the governor’s continued support, as the next governor could rescind the executive order that created it. Photo credit Jose F. Moreno/Philadelphia Inquirer

Pennsylvania has at least 1,100 police departments across the state (though the true number is hard to pin down), many with open positions.

While some law enforcement experts argue Pennsylvania municipalities should move toward consolidating departments to more effectively serve their communities, the next governor will in his first budget set priorities for how much aid the state provides to both state and local departments.

Pennsylvania has in recent years taken action to hold police officers accountable for past misconduct.

Following the murder of George Floyd in 2020, Pennsylvania enacted Act 57, a law aimed at preventing police officers with a history of misconduct from hopping departments undetected.

A Spotlight PA investigation found the law contains several issues that would require legislative action to fix, including provisions that make compliance “voluntary by design.” 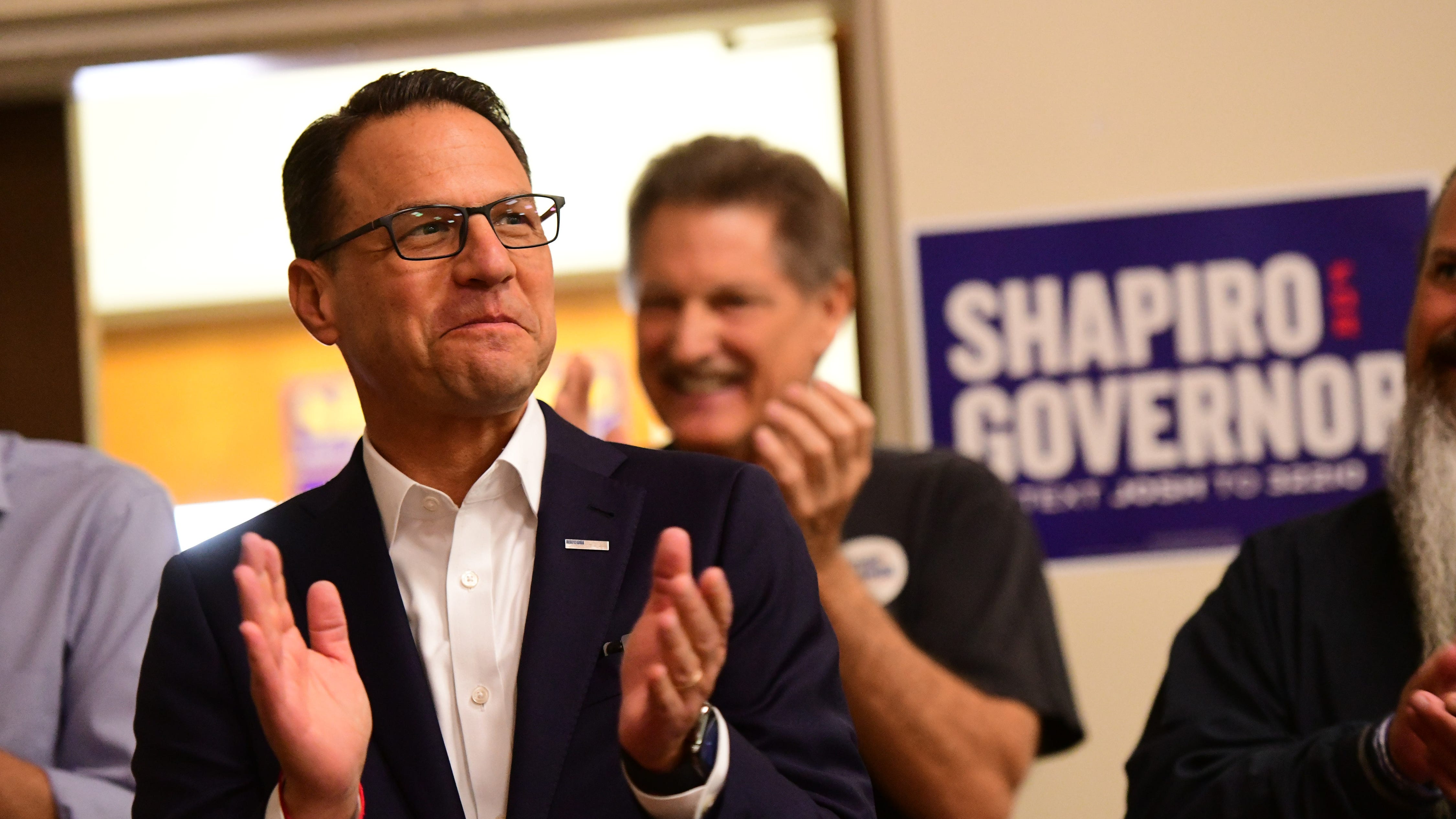 Whether the commission continues its work hinges on the governor’s continued support, as the next governor could rescind the executive order that created it.

Shapiro has endorsements from many police groups, and supports creating incentives to drive people to apply for and stay in law enforcement jobs.

He also took an active role in securing support among law enforcement officials for Act 57, which passed the state legislature with near-unanimous approval. But those negotiations also introduced some of the loopholes that Spotlight PA found undermine the law’s ability to achieve its stated purpose.

When interviewed by Spotlight PA earlier this year, Shapiro pushed back on the idea that Act 57 is essentially voluntary: “If you don’t participate, that’s against the law. Could the enforceability provision be strengthened? Maybe, and I would be supportive of that if that’s where the group wants to go.” 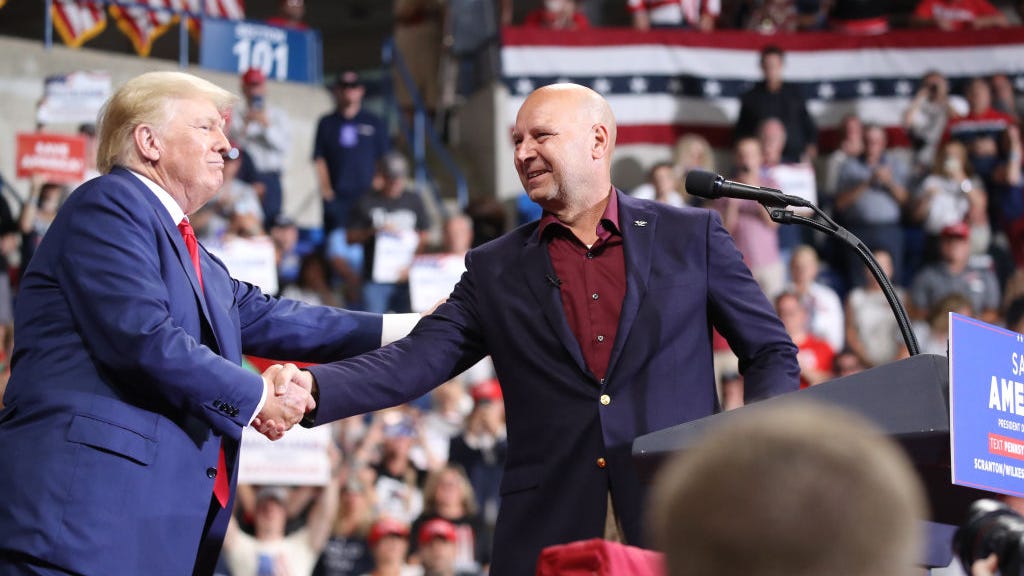 He is the lead sponsor of a bill that would create a grant program to send more state money to municipal police departments.

“On day one our administration will be a law and order administration,” Mastriano said in a recent video posted to his Facebook page. He has also promised to add additional prosecutorial resources to “high-crime” areas, according to his campaign website and various Facebook posts.

Mastriano has campaigned as an antidote to a rising violent crime rate. Pennsylvania crime statistics reported to the FBI show a nearly 38% statewide increase in homicide between 2017 and 2021, with the most notable jump in 2020 when homicide rates rose nationwide during the first year of the pandemic.

State crime data from that period (which themselves are not a complete snapshot of arrests statewide) show an increase in the rate of carjackings, but show declines in the rates of rape, robbery, assault, burglary, and larceny. 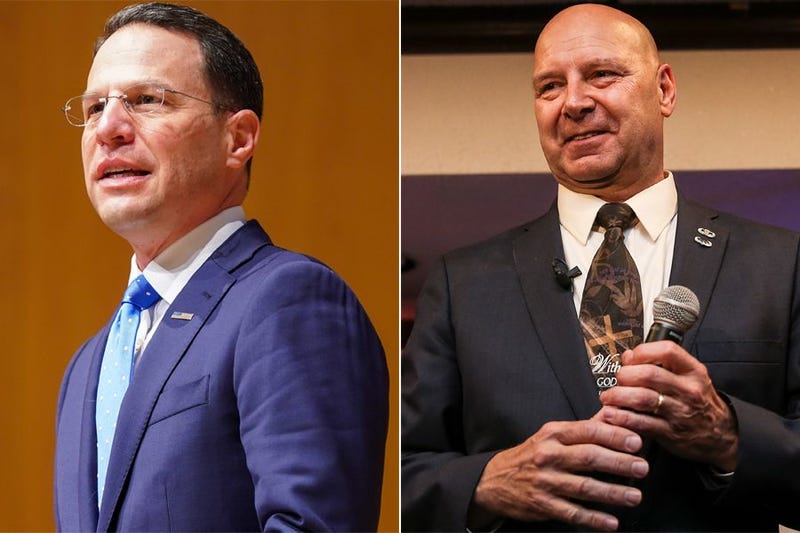 Pennsylvania’s cash bail system has been criticized for years. Studies and news investigations have found the amount of bail someone needs to pay to get out of jail varies widely by judge and location.

In its review of 2016-2017 bail data, the ACLU of Pennsylvania found that “in nearly every county across the state, [magisterial district judges] imposed cash bail on Black people more frequently and in higher amounts compared to white people.”

A report from the Office of the Attorney General on Shapiro’s term said the office found, “cash bail requirements for such offenses disproportionately harm Black and brown communities and individuals who cannot afford to pay.”

But he also has called for policy changes that would stop violent offenders from receiving low cash bail after an arrest, according to The Inquirer.

In public statements, Mastriano has criticized prosecutors who have reduced bail costs.

“At a time when PA has had the third highest increase in violent crime, Gov. Wolf and AG Shapiro want to make it easier for criminals to quickly be put back out on the streets,” Mastriano wrote on his Facebook page, responding to a tweet from Wolf advocating for revising the bail system. “This is madness.”

After a Milwaukee man who was out of jail on $1,000 bail drove into a Christmas parade and killed six people in 2021, Mastriano wrote on his state Senate website that he opposes prosecutors who seek to reduce bail burdens.

Citing the Wisconsin rampage, Mastriano claimed “the elimination of cash bail will almost certainly lead to an influx of violent crime from freshly released criminals.”

There is no solid evidence that reducing bail costs leads to a rise in violent crime. A 2022 review of available studies by The Appeal found that “there’s very little rigorous research on how bail reform affects crime in general.” 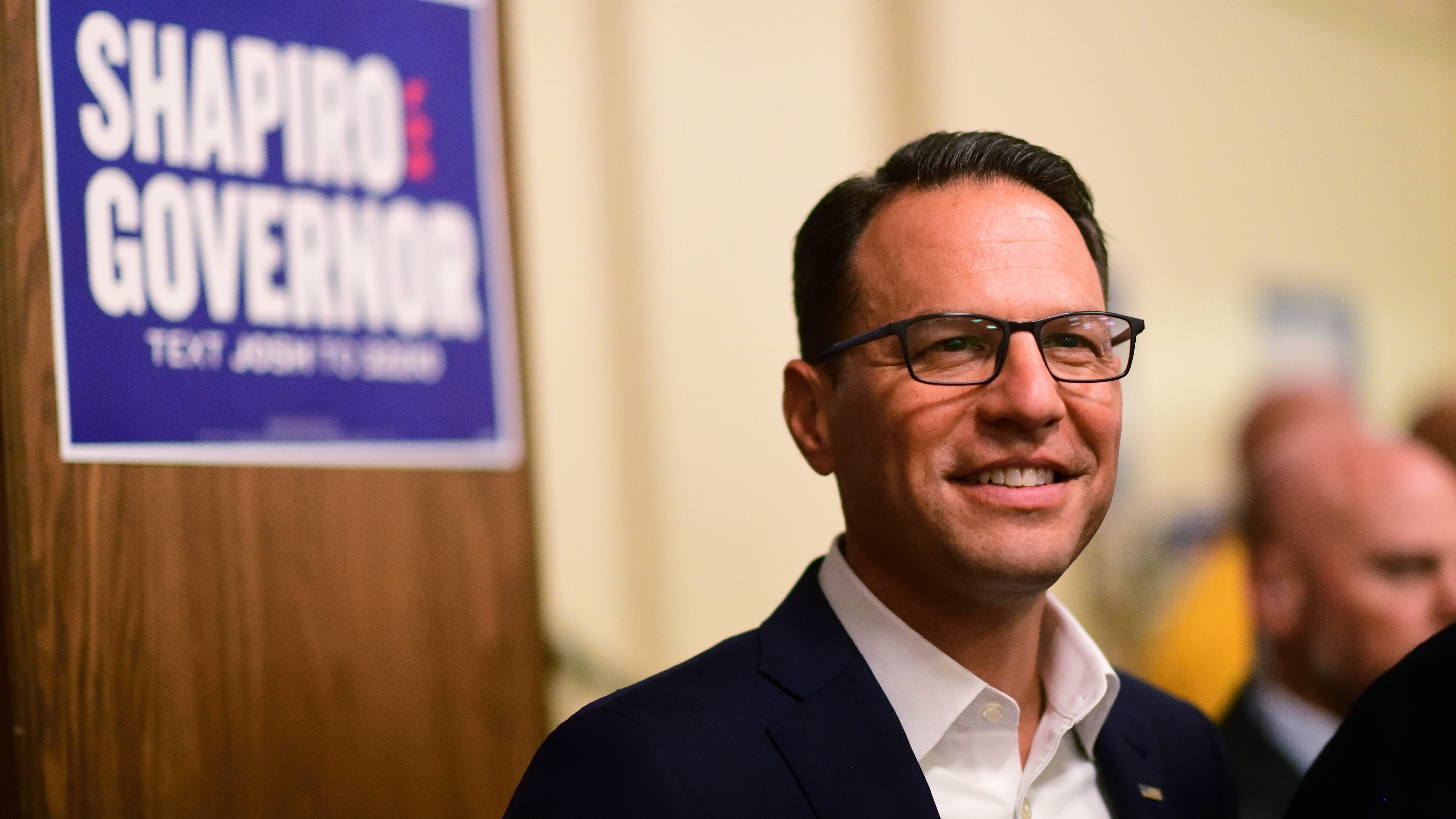 Spotlight on the Issues: Where Mastriano and Shapiro stand on...
» Crime & Justice
» LGTBQ Rights

More issue analyses will be published in the coming weeks.

A complete listing of Spotlight PA voter guides:
» Your complete guide to the candidates for governor
» How to vet the candidates on your midterm ballot
» No constitutional amendments on the ballot, but big ones loom
» How to serve as a poll worker on Nov. 8
» These Pa. voters haven’t missed a Nov. election for 50+ years
» How Spotlight PA will cover Pennsylvania’s 2022 election
En Español:» Su guía completa de los candidatos a gobernador