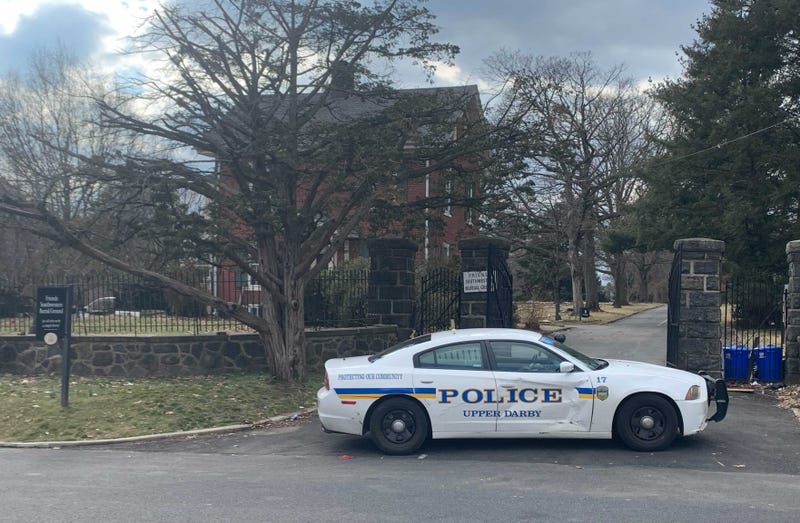 PHILADELPHIA (KYW Newsradio) — A shooting at a burial in an Upper Darby graveyard — for another shooting victim killed days before — sent two people to the hospital, and police searching for two shooters.

Police said friends and loved ones were gathered at the Friends Southwestern Burial Ground for the funeral of a person who was killed in a shooting in Philadelphia earlier this week.

Police said there was a car crash as a result of people fleeing the scene, but no one else was hurt.

"We had our own funeral here at our church, and I was inside doing that service when it happened," said Fr. Gregory Gilbert, the priest at St. Demetrius Greek Orthodox Church across the street. "Some people that were here outside of the church say it sounded like firecrackers."

Gilbert said this shooting, sadly, did not surprise him. In fact, he said there was another shooting at a funeral at the same cemetery about a month ago.

"Many of the burials being done in the cemetery right now are shooting victims," he said, "so that brings a host of issues of high tensions as people are coming to the funeral."

Gilbert said he reached out to the burial grounds to have a police presence at the funerals, but they haven't been receptive to his calls.

"The saddest part," he said, "is there seems to be no concern for the safety of the people who are attending the funerals in the cemetery across the street.

Police said they are looking through surveillance video as they try to find the people responsible for the shooting.

KYW Newsradio attempted to contact the Friends Southwestern Burial Ground, but have yet to receive a response.