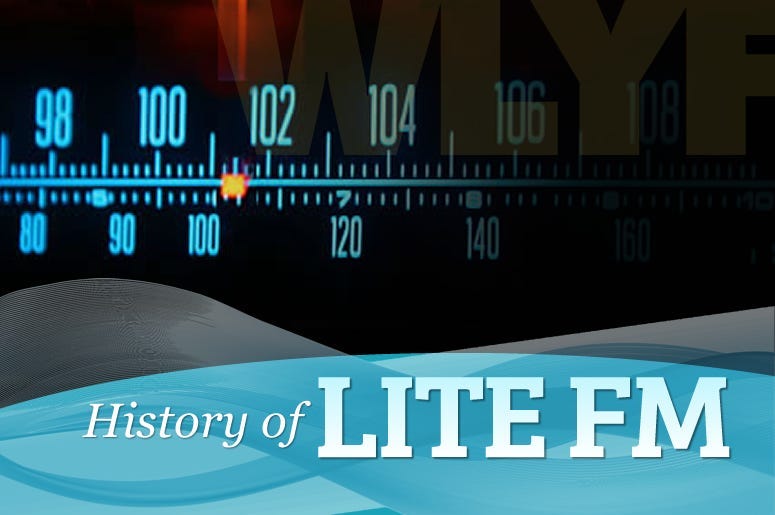 101.5 LITE FM has a long and distinguished history in South Florida radio, originally signing on the air in 1948 as WWPB-FM. For more than 20 years the station was owned and operated by Paul Brake, who served as the station's manager and program director.

In 1969, an agreement was made to transfer the station to Sudbrink Broadcasting. Sudbrink increased the station's tower height and changed the call letters to WLYF.

The studios and transmitter were moved to what some early station staffers describe as little more than a 'quonset hut' on the Dade-Broward county line. (The building's tin roof made it nearly impossible for announcers to open their microphones during a heavy rain; the noise was just too noticeable!)

WLYF was incredibly successful; becoming the nation's first FM radio station to achieve a number-one audience rating, and routinely led the Miami market in popularity. Sudbrink owned the station until 1977 when it was sold to Storer Broadcasting, which operated it (and sister AM station WGBS) from studios in downtown Miami until 1979.

Jefferson-Pilot Communications purchased both WLYF and WGBS in 1979, and in 1983 moved the facilities to their current home on Northwest Second Avenue in North Dade. In 1985, WGBS was sold (it's now Radio Mambi) in order to purchase WNWS-AM; today, WNWS is 790 The Ticket.

WLYF achieved phenomenal success as one of the country's most admired 'easy-listening' radio stations, and continued its popularity in the 1990's with a brighter, more contemporary musical sound as '101.5 LITE FM'.

In September 2009, we transferred operation to a new antenna and tower shared with WPLG-TV (Local 10). LITE FM Senior Engineer John Morris had overseen this project until his death earlier that summer. As his son, John Jr., pressed the switch to activate the antenna, we dedicated the new transmission system to his memory in this on-air presentation.​

In July 2015, Lincoln Financial Media stations were acquired by Entercom Communications Corp. (NYSE: ETM), one of the largest radio broadcasting companies in the United States, with a portfolio of 125 highly-rated radio stations in 27 top markets across the country including South Florida's 102.7 the Beach, 104.3 the Shark and 790 The Ticket.

Founded in 1968, Philadelphia-based Entercom also operates hundreds of events each year attracting millions of attendees, and provides customers with a broad range of digital marketing solutions through its SmartReach Digital products.

Today, 101.5 LITE FM is South Florida's premiere adult-music radio station, specializing in lite music and interesting conversation. It's the perfect sound to keep you refreshed at home, in the car and on the job.

In 1998, 101.5 LITE FM expanded its presence to the World Wide Web -- launching LiteMiami.com, with information and resources for Listeners and numerous online contests and interactive opportunities.

HD Radio also permits 101.5 LITE FM to provide you with real-time artist, title and album art displays for the songs playing, traffic alerts, and additional channels of programming you can hear with an HD Radio receiver -- including the new address for soft, relaxing music: Today's LIFE at 101.5 HD2.

101.5 LITE FM is also available via the AUDACY.COM smartphone app: free, local FM radio for your mobile device. You now have the ability to watch music and talk come to life with album art and song and program details .