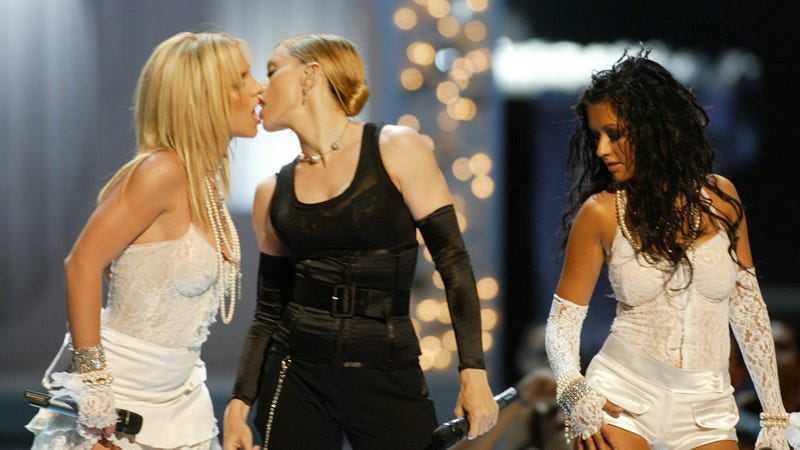 When Madonna is ready to hit the road again, she is, at least in theory, hoping to take Britney Spears along for the wild ride and maybe even rekindling the fire that she and Brit-Brit had together during the 2003 MTV Video Music Awards.

Listen to your favorite music now on Audacy curated for fans, by fans like Madonna Radio, Oh Baby Baby, Icons and Divas, and more!

During a live broadcast on Instagram Tuesday night, a fan had asked whether or not the 'Queen Of Pop' had any plans to return to arenas in the future. "Hell yeah," Madonna said. "Stadium, baby! Me and Britney, what about that?" A co-headlining tour "would be really cool," she added. "We could reenact the original [kiss]," remembering the on-screen smooch-fest she had with Britney and Christina Aguilera in 2003 during her VMAs performance of "Hollywood."

Although Madge was quick to mention that she was unsure if Spears, now free from a 13-year, court-imposed conservatorship, would "be into" the idea, especially considering that Britney has already stated that returning to music is not a "top priority" for her right now. Madonna stands with Britney Spears, 'give this woman her life back'

Unfortunately, just like in the photo above, Xtina was left out of this conversation, but we don't think there was any ill intent. Madonna had been vocal about her support for Spears during her recent, high-profile court battles. The two have also remained close friends throughout the years and even took the stage together in 2008 for a surprise duet on Madonna's Sticky & Sweet tour.

But, for those readers looking for some Aguilera action anyway, check out Audacy host Elsa Sánchez's recent chat with the singer about her brand new Spanish-language project, La Fuerza below.

Listen to even more of your favorite music on Audacy's all-new stations like Icons and Divas, Girl You Know It's Cheese, Let's Get Social, K-Bops, Beach Beats, Collabornation, and so much more!