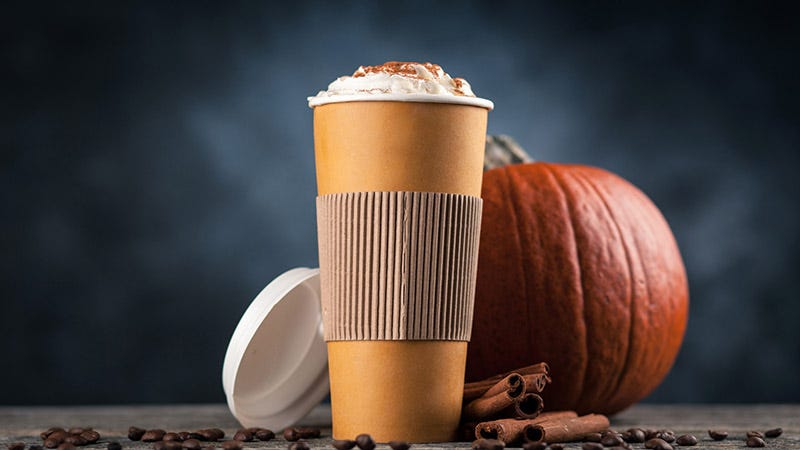 Hooray for fall! We got a burst of cool weather and to me that just screams that it is time for a pumpkin spice latte! But if you're trying to loose that pandemic weight still, then here are some options. 100% they will not be as delicious as the regular PSL...so lower your expectations. LOL!

Chai Tea: Naturally flavorful with no added sugars, a warm cup of Starbucks's Chai Tea is loaded with fall favorites like cinnamon, ginger, and cloves — as well as a boost of healthy antioxidants. If you need a little sweetness, add a dash of stevia.

Oatmilk Latte With Pumpkin Spice Topping: If you crave the taste of a classic PSL but can do without the added sugar and calories, order your choice of a latte made with oat milk, and ask the barista to add a sprinkle of the coffeeshop's Pumpkin Spice Topping. That bit of cinnamon, ginger, nutmeg, and clove will deliver the same cozy, fall vibes without the sugar rush.

Steamed Apple Juice With a Sprinkle of Cinnamon: Freshly steamed 100 percent apple juice is as good as cider, but with no added sugars or artificial flavorings. Ask for a sprinkle of cinnamon on top for some extra fall flavor.

Caffè Misto: The Caffè Misto is a one-to-one mix of brewed coffee and steamed milk — a simple but perfectly satisfying cup for a cool autumn day. A Tall Caffè Misto made with dairy milk contains five grams of satiating protein, giving this drink some staying power.

Skinny Cinnamon Dolce Latte: This combination of espresso, steamed nonfat milk, and Starbucks's Sugar-Free Cinnamon Dolce Syrup will only set you back100 calories when you order a Tall, and it's so warm and inviting.

Honey Almondmilk Cold Brew: If the weather isn't quite calling for a warm cup of joe, try this satisfying cold brew. Made with only cold brew coffee, almond milk, and a touch of the coffeehouse's Honey Blend, a Grande contains just 50 calories and packs a punch in the nutrition department. Consider asking your barista to swap the Honey Blend for a bit of real honey for even more antioxidants.

Want to wake up with some of your favorite songs with your coffee? Listen to us anytime, anywhere on the Audacy app... and get exclusive stations like Acoustic Sunrise. Try it now - just click to listen below. ⬇