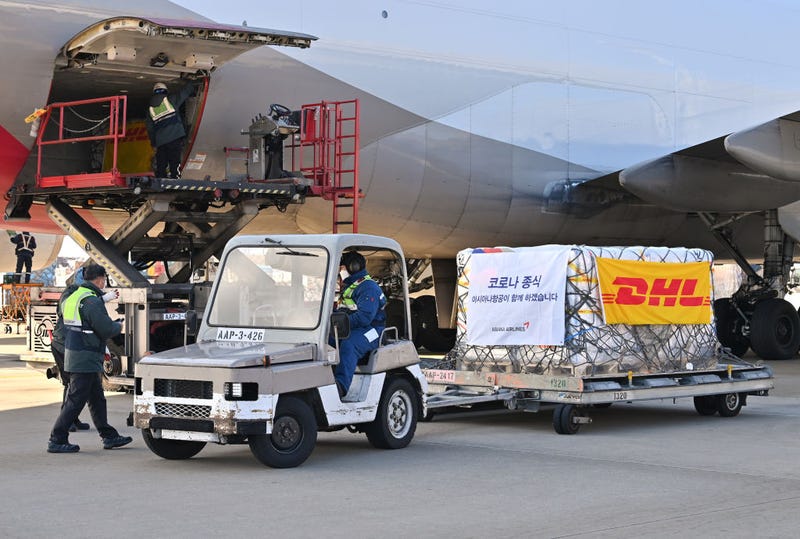 Ground crew move pallets of a shipment of Pfizer's antiviral COVID-19 pills, Paxlovid, as they arrive at a Incheon International Airport cargo terminal on January 13, 2022 in Incheon, South Korea. The first batch of Pfizer's Paxlovid antiviral COVID-19 treatment pills arrived in South Korea, according to the public health authorities. The antiviral pills for at least 21,000 people will begin being administered Friday to patients with a compromised immune system and those aged over 65, with the second batch for 10,000 people to be shipped by the end of this month, they added. (Photo by Jung Yeon-Je - Pool/Getty Images) Photo credit Getty Images
By Lauren Barry, Audacy

Last month, the U.S. Food and Drug Administration approved two antiviral pills for mild to moderate COVID-19 infections, a breakthrough in treatment for the virus. It seemed like a miracle.

There’s a problem though: the pills are not easy to find, especially Pfizer’s Paxlovid, which reduces hospitalizations by around 90 percent.

What are the antiviral pills?

A day after Paxlovid received the FDA green light on Dec. 22, the administration approved molnupiravir, an antiviral pill COVID-19 treatment manufactured by Merck. This pill reduces the risk of hospitalization in high risk patients by just 30 percent and is not considered as safe as Paxlovid.

“I actually consider it the biggest advance in the pandemic since the vaccines, and the safety is part of it,” Dr. Eric Topol, executive vice president for research at Scripps Research in San Diego, told CNN. “It's very rare to see something with this much efficacy of nearly 90 percent reduction of hospitalizations and deaths with no safety issue beyond placebo.”

However, hospitalizations for COVID-19 in the U.S. shot up around 60 percent as 2022 – and the omicron variant – rolled in, so any treatment preventing more strain on the medical system is welcome.

Kim Kramer, a 62-year-old fully vaccinated and boosted Georgia woman with heart failure, was able to find molnupiravir after she received a positive COVID-19 test. She said her symptoms began to fade away within a day and that she had no side effects.

Clay Byington, a vaccinated 26-year-old Minneapolis man who is both overweight and Native American, was prescribed Paxlovid when he came down with the virus. He said his recovery was easy and uneventful.

Why are they hard to find?

According to the U.S. Department of Health and Human Services, the federal government first purchased a total of 10 million courses of Paxlovid.

An initial shipment of 65,000 doses were expected to arrive at the end of December, and the department noted that supply of the drug would be limited at first.

“Initial allocations of Paxlovid were determined on a pro rata basis and will be provided to state and territorial health departments for free,” the department said.

“That basically was part of that vaccine-only strategy: that the idea was, the government thought that vaccines were going to do the job and didn’t put a bet on the pills,” said Topol. “It was actually worth the bet at the time, especially when you look backward. I think the whole idea is, you pull out all the stops.”

As of Wednesday, only 160,000 courses have been delivered across the country, according to CNN. On that day, 894,971 new COVID-19 cases were reported in the nation, per Johns Hopkins University data, and 145,982 were hospitalized with the virus, according to the Department of Health and Human services.

“There's hardly any of these pill packs around,” Topol said.

“UCSF only got 40 patients worth, and it was gone pretty quickly: in less than 10 days,” she said. Once the Paxlovid was gone, they moved on to molnupiravir. Another Paxlovid shipment isn’t expected at the institution until the end of the month.

“We are not getting the supply that's needed,” Kotis said. “The numbers are not even near close to reasonable terms. ... And there's no rhyme or reason how the supply is being allocated.”

Shireesha Dhanireddy, professor of medicine at the University of Washington School of Medicine and Harborview Medical Center, said the hospital system is meeting the need of patients because it is following those guidelines.

“We're using these medications judiciously and really giving them to the people that would most benefit from these therapeutics,” Dhanireddy said. “If we opened it up to vaccinated individuals, we would not have enough therapy.”

This week, Dr. Anthony Fauci, chief medical advisor to the President, said that most people will likely have an omicron-related infection eventually.
People who have been vaccinated typically still have strong protection against severe illness.

Will it ever be easier to find Paxlovid?

As of Wednesday, the U.S. doubled its purchase of Paxlovid to 20 million treatment courses.

“Working closely with Pfizer, we’re further accelerating the delivery of these pills so that we’ll have the first 10 million by the end of June instead of the end of September,” said Zients of the treatment distribution timeline. “And we continue to work with Pfizer to help them further expand their manufacturing capacity, including through the Defense Production Act if needed.”

According to an analysis by CNN, the 20 million treatment courses could eventually prevent more than a million hospitalizations.

Yet, as the country waits for the pills to arrive, transmission of the virus is still significant. If the pills were more widely available now, it’s possible that less people would even be getting infected and landing in hospital beds.