CBS has announced the long-running sitcom will end with the upcoming season 8 finale in May, according to Variety.

The cancellation news comes just months after lead star Anna Faris suddenly departed the series before production was set to begin on season 8 in September.

“For the past eight years, we’ve had the great honor to bring these wonderful characters to life, sharing their struggles and triumphs with millions of viewers every week,” executive producers Chuck Lorre, Gemma Baker and Nick Bakay said in a statement.

“From the beginning, we set out to tell stories about recovery from alcoholism and addiction that are rarely portrayed in a network comedy series. Whether it was the emotional reactions of the live audience on tape night inside Stage 20, or discussions at The White House regarding the opioid crisis, or the personal stories we continue to receive on social media, we take great pride in knowing ‘Mom’ has positively impacted so many lives. We are forever grateful to our brilliant cast and guest stars, wonderful writers, and amazing crew for going on this journey with us.”

The series launched in 2013 and starred Faris as a newly sober single mom raising two children in Napa, California with the assistance of her estranged mother played by Allison Janney. 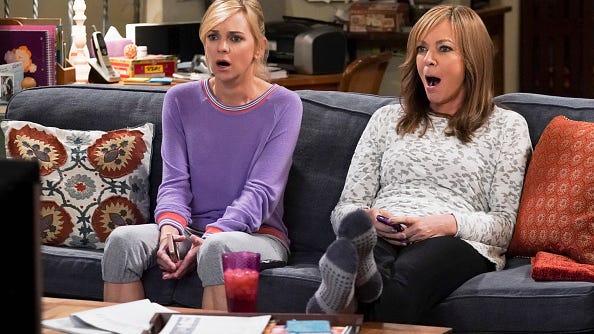 “Mom redefined what a comedy can be, and we are proud to have been the network home to this wonderful series. We are deeply grateful to Chuck Lorre and his tremendously creative production team, helmed by Gemma Baker and Nick Bakay, and the amazingly talented cast, led by the phenomenal Allison Janney.”

Following Faris’ abrupt departure, her character Christy was written out by having her go off to Georgetown Law School on a full scholarship. The series continued with Janney in the lead role.