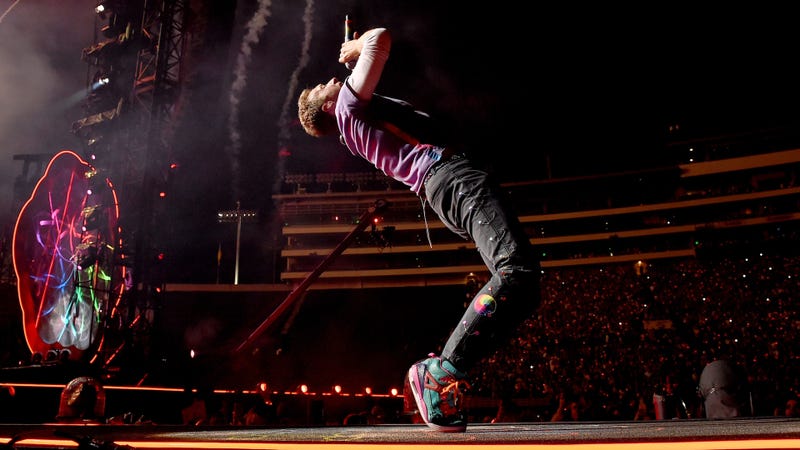 Coldplay are the veterans of the Album of the Year group with a career spanning multiple decades and eight studio albums. Their double album Everyday Life received two nominations at the 2021 GRAMMY Awards bringing their career GRAMMY nominations up to 35. As such, it also marked an evolution in the band’s sound and lyrical content. Here’s why it should take home Album of the Year at the 2021 GRAMMY Awards.

“Our whole philosophy on this record is like, f*** it, just do it and not be afraid of anything.”

Those were frontman Chris Martin’s words in a 2019 interview with RADIO.COM’s Kevan Kenney about the inspiration behind their album Everyday Life. It’s certainly a mantra that can be heard throughout the record as Coldplay created a soundscape that evolves from track to track.

Coldplay has never been shy to dabble in different genres on their records. Whether it’s the bombastic pop anthems that stemmed from A Head Full of Dreams, the electronica-tinged Ghost Stories, to the alternative and indie rock leaning of their earlier records like Viva la Vida or Death and All His Friends and A Rush of Blood to the Head, Coldplay frequently changes up musical styles.

Everyday Life stands out from their previous records for another reason. They abandon the thought of having one musical style be present on the album in favor of creating a record that showcases different styles from song to song.

“There’s quite a few songs on this album which I thought would never be accepted by the rest of the band,” Martin told us in the 2019 interview.

Of course there’s songs on the album that are perfectly suited for a crowd of 50,000 plus singing along in unison. It is Coldplay after all and they have mastered that ability by this point in their career. “Champion Of The World” and “Orphans” serve as perfect examples of this.

At the same time, there’s songs that if you played them for Coldplay fans back in 2008, you’d get a surprised reaction that it’s the same band.

“Guns” is one such track as Martin deliberately wrote it as if Bob Dylan was covering a Rammstein song. “I was thinking, I wonder what would happen if Bob Dylan was playing one of their songs,” Martin said. “And then the riff for ‘Guns’ came out.”

Another stark reminder on how much effort Coldplay put into abandoning boundaries on this record comes with the psychedelic jazz freakout track “Arabesque.”

The songwriting credits feature an eclectic mix of musicians. Aside from the four members of Coldplay, iconic Nigerian saxophonist Femi Kuti, Belgian musician and rapper Stromae, and Drew Goddard from prog-rockers Karnivool all received songwriting credits.

The song is arguably one of the most ambitious Coldplay has put out and is remarkably their first ever studio release to feature explicit lyrics as Chris Martin screams out “same f*****g blood” during the song’s climax at the end. Add that on top of an infectious rhythm, French lyrics, a horn section, and a saxophone solo that takes you on a jazz odyssey, “Arabesque” is certainly one of the more interesting tracks on the record.

Everyday Life also saw Coldplay use their lyrics to touch on social issues. In the 2019 interview with RADIO.COM, Chris Martin discussed the meaning behind the album’s lead single “Orphans.”

“We’d been thinking so much about all these kids in refugee camps who are just like us. Well, I’m not a kid anymore but, people being labeled as just migrants or just refugees or just immigrants,” Martin said. “And really they’re human people just like everyone else, and we were thinking about particularly the young people who’ve been displaced, who just want to go home and be normal just like everybody else.”

Another example can be found on the album’s third track, “Trouble in Town.” Towards the end of the song, the band includes an audio sample from a 2013 incident involving a Philadelphia police officer racially-profiling and harassing a man.

The track “Guns” criticizes the love of guns and the idea that they’re a solution to fixing the problem of gun violence. “Advertise a revolution, arm it when it comes / We're cooking up the zeros, we've been doing all the sums / The judgment of this court is we need more guns,” Martin sings in the opening verse.

Will Coldplay be the one to take home Album of the Year at the 2021 GRAMMY Awards? Find out for yourself and watch the GRAMMYs on CBS, Sunday March 14th, starting at 8PM ET.