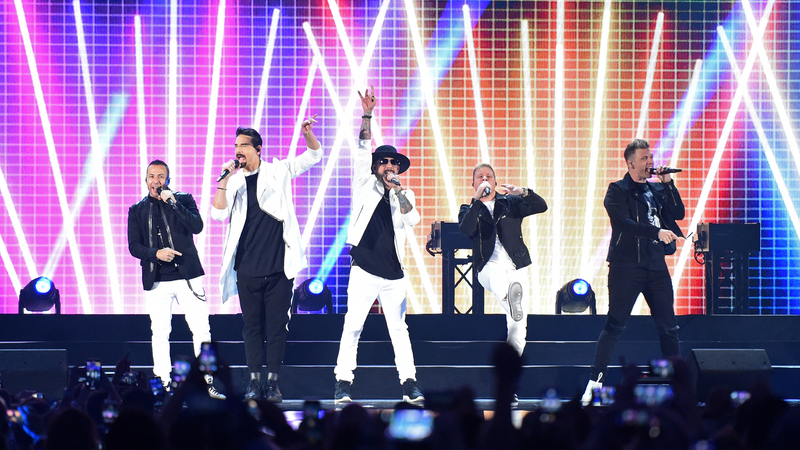 Remember the days of the late 90s and early 00s, when the Backstreet Boys used to fill our fan girl and boy hearts with excitement over their synchronized dance moves. Well, 25 years later, they’re still wowing audiences us with their moves, though there are a few they've chosen to retire.

As BSB is taking their DNA World Tour on the road, the “boys” chatted with Entertainment Tonight about what changes to expect.

Noting that a few of their signature dance moves that once drove fans crazy years ago, won’t be included in upcoming shows, because certain things are’t as they used to be — and by certain things, we mean their agile knees.

"They hurt more!" Howie Dorough laughed, "We can't get down on our knees anymore 'cause we can't get back up.”

As for exactly which moves they're retiring, Kevin Richardson, 50 years old and the eldest of the group explained, "we used to be in a standing position, drop to our knees... with no knee pads on, and then pop right back up. We don't do that anymore,” he added. “We don't do kip-ups anymore, when you're laying on your back and jump up. We don't do splits anymore.”

But as AJ McLean revealed, despite not being able to completely "get down, get down and move it all around," a few of the moves have been added to make up for the ones they’ve dropped, that are also not so knee friendly. "There is a moment in one of the new records off of the DNA album, a song called 'New Love,'” AJ said, “where we do bend down and go up and down and up. And, man, that one stings a bit.”

Still, according to Brian Littrell, it’s all worth it, pain and all just to see “the reaction and the smiling faces and people singing the songs.”

Set to visit 83 cities all across the globe, Backstreet Boys have decided to also make their tour a family vacation of sorts, with each member bringing their families along for the ride.

"We make a vacation out of this," Kevin said. "We each have our own bus. All of our families are on the buses with us. On days off, we go to destinations, we'll go to campgrounds, national parks.”

And as some members have older, they shared that for some it’s been difficult to fully grasp and come to the realization of who their fathers are.

"I think as they've gotten older, some of our kids freaked out," A.J. said, recalling a moment when Kevin’s son freaked out when girls were screaming for them during a taping of Good Morning America. Revealing he was like, “whoa, this is overwhelming,” but that since then, it’s changed to, “My dad's cool. My dad's awesome.”

Nick Carter, who plans on bringing his middle daughter on tour, predicts that she's "probably going to give some dirty looks to some of the girls out in the audience... and then she's probably going to do what AJ's daughter did at one time, yell, 'Get off the stage! Get down now!’"

Check out everything BSB had to say about to expect from their upcoming World Tour here.