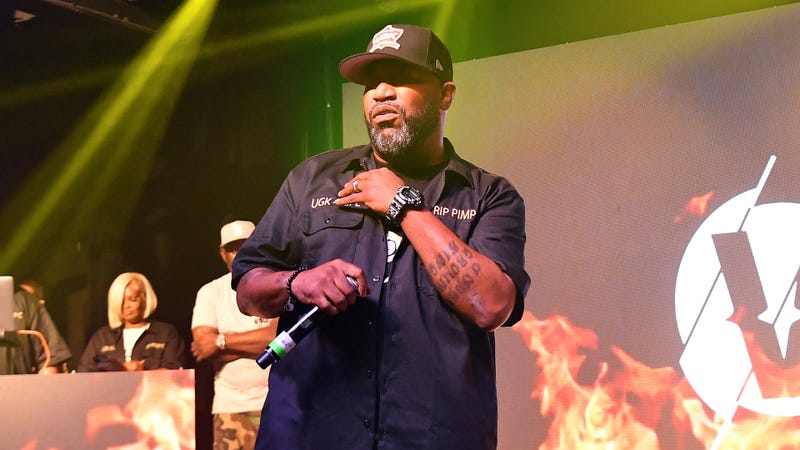 Ahead of the 8Ball & MJG VERZUZ UGK battle, Bun B stopped by V-103's The Kenny Burns Show to catch up with his buddy Burns, and chat all about the Memorial Day Weekend match-up.

LISTEN NOW: Bun B stops by The Kenny Burns Show ahead of his VERZUZ battle

After reminisce about their experience at The Gumball 3000, which Bun and Burns described as a traveling car show, the conversation swiftly shifted to the topic of VERZUZ.

“I feel blessed man, I’m excited about tonight,” Bun B said referring to the impeding battle, “It’s a great opportunity to put on for the culture and represent for my brother Pimp, with my other brothers Ball and G, and just really put this Southern Hip Hop music in proper perspective.” Noting the “VERZUZ is the perfecting platform to do that.”

“We all feel like we’re all gonna shine tonight, everybody’s gonna look good, both side we wanna make sure that we do Pimp right tonight.”

With his family in tow in the studio, Burns called out Bun’s granddaughter, prompting her to come to the mic to ask if she knew that her grandfather was legend, and while she answered that correctly with a “yes,” she wasn’t able to name her favorite UGK track (smh).

For Bun, having his family around him is important is a treat, but doesn’t always happen. However due to the weekend's events and celebrations, they asked to come along. “They asked to come, it’s a beautiful thing, they understand what VERZUZ is, and they know that culturally these things resonate very deeply with people. And they know that for a lot people this is gonna be, not just a musical moment, but a spiritual moment.”

He continued, “It’s a moment where hundreds of thousands, potentially millions of people get to all tune in and be on the same note.. music, vibe and energy. And they wanted to be here to see it, they didn’t want to watch it at home, so I said come on.”

Talking about the staying power of the UGK track, “International Players Anthem” next, Bun revealed to Burns, that he had actually recently had a conversation with Everlast from House of Pain about the very same thing.

“He’s a guy that has a record they’re gonna play forever,” B said, referring to “Jump Around.” Bun continued, sharing that Everlast told him, “We’re in this very exclusive group of people, most people work their entire lives, at any job, not just music… put in hard work, go in, do what they supposed to do, go home, never get recognized, never get acknowledged. We went to work one day, did one thing, and it will live and breathe forever.”

In Bun’s words, “these songs are gonna play… long after I’m gone. And here’s the reality, VERZUZ is proof of this because Pimp has been gone for many years now, and yet his voice, his spirit, his energy, and music and legacy still remains. And I would argue he vibrates even higher and deeper today.”

And the conversation didn’t stop there, trust, you’re gonna wanna hit play on the full interview above.

Heat things up in a way only the South can, press play for all the Dirty South Hip Hop, now on Audacy