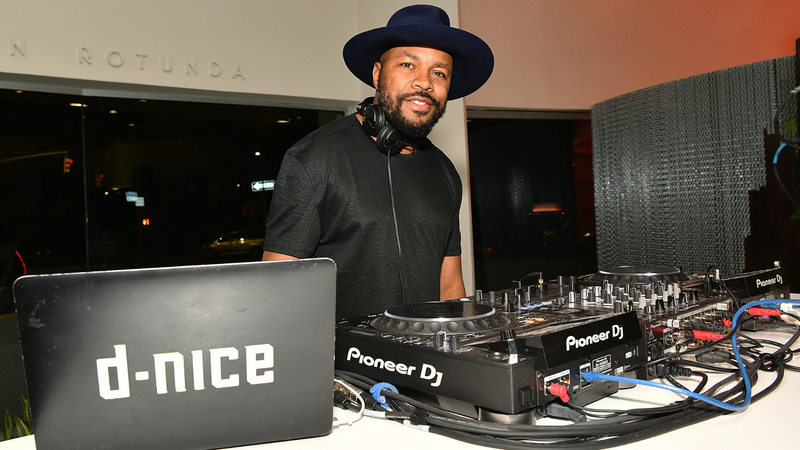 D-Nice dominated during the quarantine of 2020 and truly used the power of music to unite millions of strangers.

However, before he became the world's favorite DJ, he was a music lover around the men who birthed Hip Hop, and an artist in his own right. The leader of the newly minted CQ (more on that later) got candid with Audacy's own DJ Buck and Big Regg to discuss his resurgence as a "party DJ" in the early 2000s and how he plans to merge his world before Club Quarantine and after— now that outside has reopened.

D-Nice (born Derrick Jones) reflected on a time when he wasn't in demand. In the early 2000s, after being the personal DJ to KRS-One, he went back into the party scene. In New York City, in a small lounge called Serena, is where you would've found a younger D-Nice during "SuperFly Wednesdays." The party took place from 10pm until 4am because "all I wanted to do was play 80s R&B, like that kind of old-school vibe," he reflected. "There was this couple who came every single week and the wife came over to me one day (she was a professor at NYU and her husband was a firefighter) and she said, 'we come every week and no matter how many people are here, you just look like you're having fun.'"

Jones walked away with this lesson that he's always carried with him: "no matter what you do, no matter how many people are there, those people took their time to be with you. Have some fun with them." This is what powered him during hard times of Club Quarantine. One example he brought up was recently when he got in late from a flight, and before unpacking, got onto Instagram Live and played a 45-minute set for over 17K people. "I just felt like playing music," he expressed. "People need music. What we did truly saved the world [...] so I take it seriously."

With COVID protocols being lifted, the NAACP Entertainer of the Year, admitted that he's on Instagram less. "Here we are, one year later, people still feel the desire to hear me play music [...] I know people are out, doing things, but there's still people that really want to hear the music."

What Jones is ready for now is to bring Club Quarantine, now simply known as CQ, offline and into a live experience. "I've partnered up with LiveNation and I'm really excited that it is going to be [CQ]. It's just powerful to know that this thing sparked a movement, a movement of people that love music, that love the culture. I have a whole year worth of friends that I've never seen in person." He laughs and continues, "I promise when CQ Live happens, I almost want to sell shirts with 'Hello' on it where you can just write your screen name. [...] a year and a half, I'm seeing names and I can't wait for people to have that experience to dance together live."

Recently, he (alongside Diplo and 2 Chainz) performed live at the Preakness in Baltimore and while on stage, he went live on Instagram. He remembered seeing one frequent CQ member and shouted her name. The woman, who happened to be attending the show, began to jump up "in the front row" and alert D-Nice of her presence. That is the power of CQ. "That feeling of being able to interact with people is beautiful," he expressed.

D-Nice will be taking on the Hollywood Bowl, later this year, but date and time is still being determined. He does want to continue to merge his online following with his in-person fans and stating, "after the year that we've had, we all deserve to be acknowledged. We all deserve to be seen and I want to give that to people." Dive into the full D-Nice interview above where he reflects on making history, his time as an artist, his single with Ne-Yo and much more.