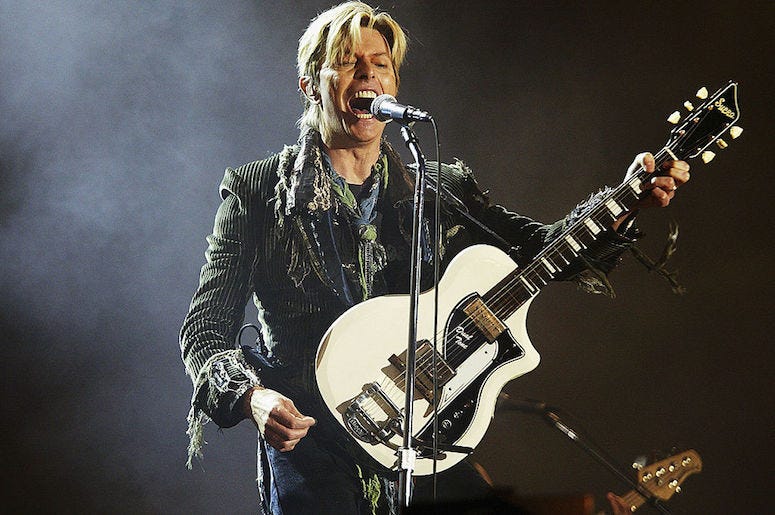 You’ll find these names at the top of many “best rock musicians” list, but seldom are they found on the same record.

On January 8, the date that David Bowie would have turned 74 years old, a limited edition 7” single of the late artist covering John Lennon’s “Mother” and Bob Dylan’s “Tryin’ To Get To Heaven” will be made available.

In 1998, Bowie recorded a rendition of the classic John Lennon track for a tribute that never materialized. His take on Dylan’s “Tryin’ To Get To Heaven” was also recorded in 1998 during the mixing sessions for his rare live record LiveAndWell.com.

The 7” single is limited to 8,147 copies of which 1,000 will be available as a cream colored vinyl. Additionally, both tracks will be made available to stream and download for the very first time.

There was only one way to launch the commemorative coin celebrating David Bowie's intergalactic legacy and career – by sending the first UK coin into space! The coin reached 35,656m and orbited the Earth’s atmosphere for 45 minutes before safely descending back to Britain. Discover a coin for a British music legend that is out of this world – literally!: http://ow.ly/l1Y150CCQxS

In other Bowie news… He’s finally been sent to space! Well, at least a coin bearing his resemblance.

Earlier in December, The U.K.’s Royal Mint sent a specially made coin of the late artist into space. The one ounce silver proof coin traveled for 45 minutes and reached an out-of-this-world altitude of 116,982 feet before descending back down to Earth.