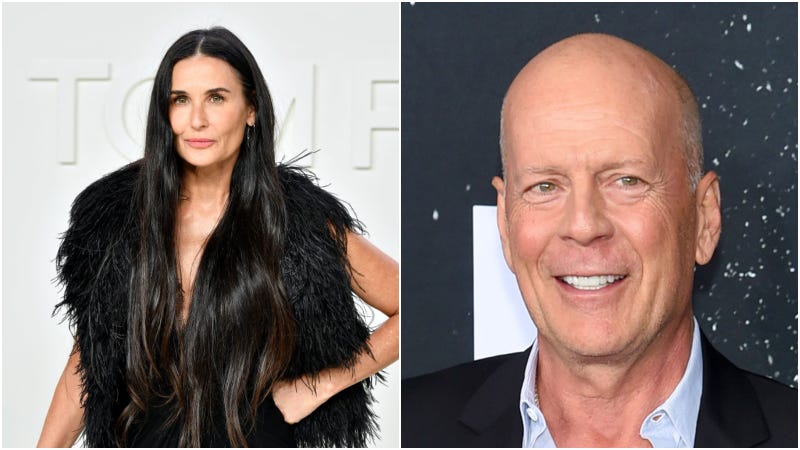 Bruce Willis got twice the Father’s Day love from his famed ex, Demi Moore, and current love of his life, Emma Hemming Willis.

Moore and Willis were married from 1987-98, and had three daughters together, Rumer, Scout, and Tallulah. They’re probably everyone’s favorite friendly Hollywood exes, and it’s always nice to see how well they’ve handled their split — not always common in Hollywood.

Yesterday, as Yahoo reports, Moore posted a couple lovely Father’s Day tribute photos. First was a fun B&W shot from years ago, with Willis and their three girls all sticking out their tongues, with the caption, "Happy Father's Day to this #GirlDad. We are so lucky to have you."

Bruce Willis (“Die Hard,” “Pulp Fiction”) has since remarried in 2009 to model and Coco Baba founder, Emma Heming, with whom he has had two more daughters, Mabel and Evelyn.

So in a further show of familial solidarity, Moore, 58, added another B&W shot, a more recent and more cinematic photo of the whole blended family.

It’s a nifty pic through the window of a vintage car, with the whole extended clan standing on the banks of a small lake. Add in Willis’ fedora and the younger girls’ flowy dresses and it could be a scene from an old western.

Not to be out-momed, Willis’ current wife, Emma Heming Willis, commented under Moore’s post, “We really are.”

And Emma posted her own fun family pic, of herself, Willis, and their two daughters in a laughing pile-on.

Apparently, according to Emma’s caption, five ain’t enough for the ol’ action star; “Bruce’s response when asked if he’d like to have a son?… 'I’d have 5 more girls right now.' Happy Father’s Day to this proud #girldad”

And if that isn’t enough nice let-bygones-be-bygones for you, Emma also posted a pic on June 18 of the whole brood gathered at her 42nd birthday, with the loving caption, “Another go around the sun and celebrated it with a few of my favorite people.”

Among other celebs who posted Father’s Day greetings to their ex’s -- Kim Kardashian and Kristen Cavallari.

Some people really know how to do divorce right.