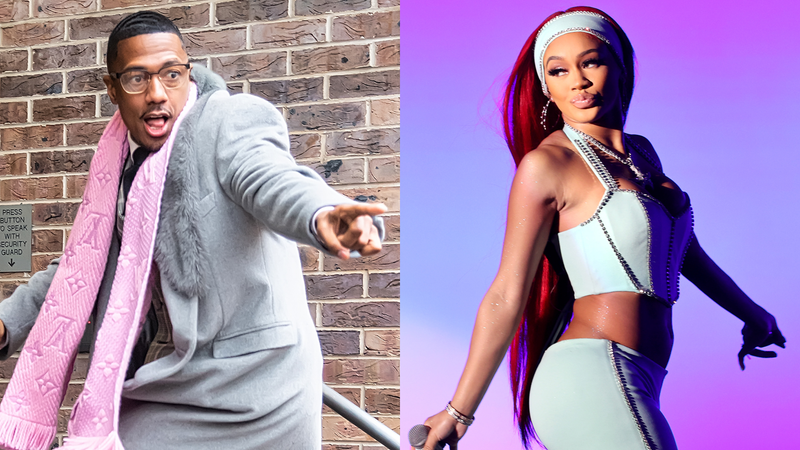 Saweetie clearly has baby fever, as the rapper took to Twitter over the weekend, with a short and sweet tweet that said, "I want some babies." Which sure, has no real other context, but let’s be real... it sounds like she's ready to be a mom.

Well, while that’s news in it of itself, it was actually the less shocking portion of it after Nick Cannon seemingly volunteered as tribute. Again, without any real context, or actual words for that matter, Nick replied to Saweetie with four emojis.

One of which was the *rolling-on-the-floor-laughing* emoji, which could signify it as a joke. But then again he also used the *thinking-face* and *man-raising-hand* emojis. Which if we’re keeping it 100, totally looks like he’s shooting his shot at baby daddy. So, let’s just go with that.

Nick’s response, while surprising (but also not) and definitely hella cringey, actually makes sense, as he’s definitely well-equipped for the job, y’know with Cannon already being such a family man.

Already a dad of 7 (three of which were born this year) Nick shares 10-year-old twins Monroe and Moroccan with ex-wife Mariah Carey. He shares 4-year-old son Golden and 10-month-old daughter Powerful Queen with Brittany Bell. Then in June 2021, NC welcomed twins Zion and Zillion with Abby De La Rosa. That same month, model Alyssa Scott confirmed that she and Nick had also welcomed their baby boy Zen.

Though Nick has talked about being celibate, based of his latest offer, looks like that’s not the life for him. Whether that’s something Saweetie is into is a whole other story. But with her lack of response we’re just going to assume, that’s gonna be a no for her dawg.