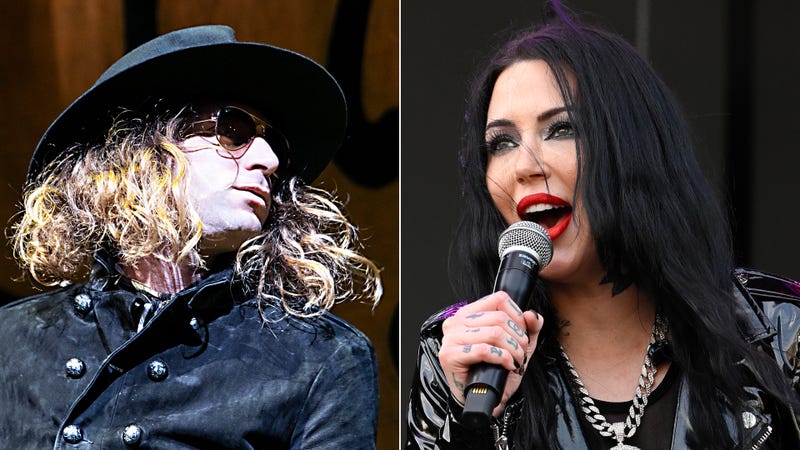 Marc LaBelle of Dirty Honey and Dorothy -- of, well, Dorothy -- joined Audacy host Carlota to talk about their current tour, "dangerous" music, and what fans can expect from both bands in the near future.

After first showing off their awesome band tees -- Carlota rocking Slipknot, Dorothy rocking Def Leppard (Pyromania era, mind you), and Marc of Dirty Honey with a full shelf of options like Aerosmith, Black Crowes, and more -- the trio got into talk about hitting the road.

Just off an eight-week tour, Dorothy says she's excited to get back out there with Dirty Honey; "Mad respect for this band," she adds. "Their fans have been awesome." Earlier this year, Dorothy released "Rest In Peace," which received considerable Rock airplay, a single that tells the story of her alcoholism and recovery. "If you don't share it," Dorothy says, "then you miss the opportunity to maybe pass along a message to someone that needs to hear it. You never know, that one thing you say could be life or death for somebody because this disease kills people."

Dorothy decided to take the reigns on her latest album, Gifts from the Holy Ghost, released in April of 2022, explaining how as an artist, "nobody gives you a handbook on how to Rock & Roll. I spent the last eight years having people tell me what to be... and kind of steer me away from true Rock & Roll at times, and I got a little fed up with it." Once 2020 came around, she buckled down, made some calls, and got to work. "The right people would come into my sphere," she adds, "and I got a lot of talented friends on this record. I'm really proud of it."

Was it dangerous to take on the project on her own? Sure, but with danger comes a lot of fun, and some big rewards. "I think that's the key," says Marc, "even when you're writing about something a little bit darker or a breakup... you've got to find a way to make it connect with the audience."

"It's interesting to hear where that's actually coming from from the artist, and I've dealt with that a bunch... I always like the songs being a little more vague than the Country style where it's so on the nose it can't be something else. That's something that I've always appreciated about The Black Crowes, and Aerosmith, and Zeppelin. They're always slightly vague, unless it was like, a love song."

Listen to the full interview above and be sure to catch Dirty Honey on the road now, making stops across North America with Dorothy and Mac Saturn on select dates. Check out their currently scheduled list of shows below. Tickets are on sale now.

Check out some of Audacy's all-new stations like Arena Rock, Wake Up and Rock, Masters Of Metal, IndustriALT, Don't Metal In My Affairs, Venom, 80s Guitar, Rock N’ Road, Freedom Rock, The Canyon, and The Roots of Rock for those who crave the early days.