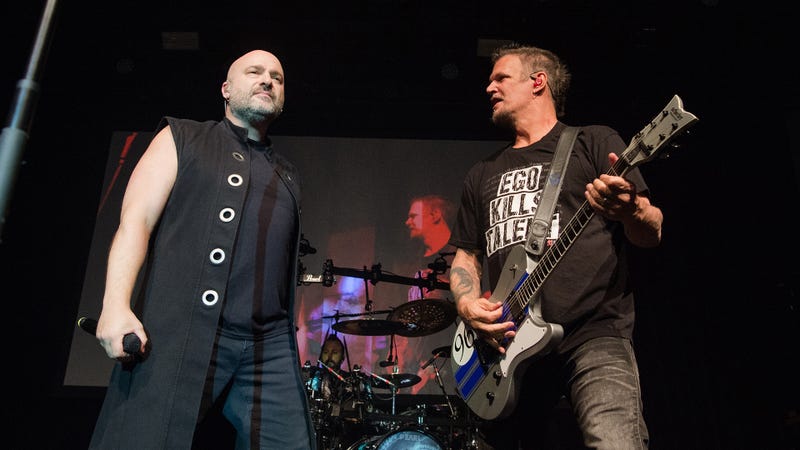 "Disturbed Ones," rejoice! The band has officially announced the tracklist and release date for their eighth studio album, Divisive, and has offered up a brand new single to celebrate!

Along with the official release date, November 18, 2022, Disturbed is kicking off their Divisive era by unleashing the unpredictable and undeniable new single, “Unstoppable,” -- "definitely one of the heavier tracks on the record," says frontman David Draiman. "The groove builds into a bombastic animal. It’s truly the fight song."

Regarding the soon-to-be-released Divisive, frontman Draiman notes, “Partisan tribal warfare has become a part of our regular existence nowadays. It’s one big battle of the cliques. The whole idea of the record is to be a wakeup call for everyone. Our society has become addicted to outrage. Music is the best cure for what ails us though. If only everyone reached out and used it. There’s no better environment to forget about all of this shit than live music. We can be together and realize we have more in common than not. Recognize what’s happening and let’s make a change for the better.”

Guitarist Dan Donegan adds, “Whatever it takes, we’ve got to pull it together. We’ve always tried to take negative topics and spin them in a positive light. From touring around the world, we’ve seen the power of music as the universal language to bring everyone together from all walks of life. We can still play songs to unite people, and it’s a pretty powerful feeling.”

Check out the full tracklisting for Divisive below, which also marks the first time Disturbed has featured a guest artist on the emotional duet “Don’t Tell Me,” with Heart's Ann Wilson. Pre-orders are available now.

Fans got a taste of Disturbed's first new music of 2022 with the release of "Hey You" over the summer, showing they've bottled up the past two years of frustration, given it a powerful shake, and are now ready to crack it all wide open. “These past couple of crazy years have taught me to appreciate our ability to somewhat at least get back to a ‘normal’ life,” Draiman told us in July. “When everything that you’re used to gets suddenly taken away from you and you don't have a say in the matter… it’s quite the emotional bomb that gets set off. I’m sure it messed with a lot of people, I know it messed with me.”

"'We were just starving to get back to what we do and we were very eager to put out this group of material which we feel so very good about. I mean ,‘Hey You' is the tip of the iceberg in this whole situation," he added. "It's definitely a very loud and proud introduction to the record, but there's a lot more to come that I think people are gonna be really blown away by."