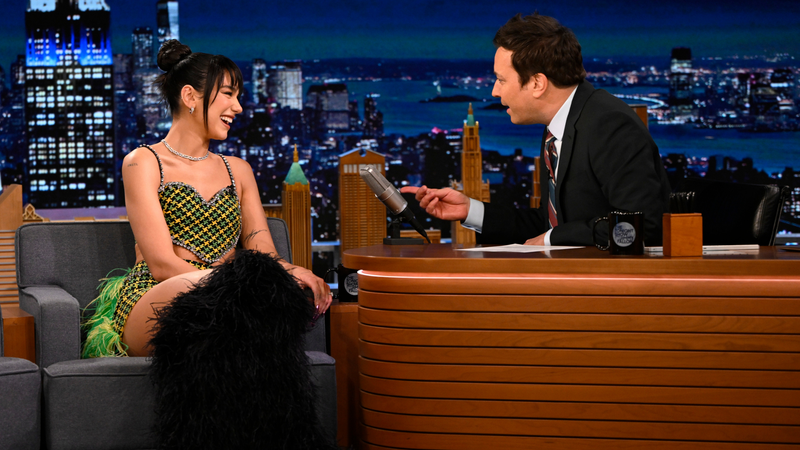 Taking time away from her current very busy world tour schedule, Dua Lipa payed a quick visit to the The Tonight Show Starring Jimmy Fallon. After discussing her re-claiming ownership of that viral hip shaking dance that caused her much grief once upon a time, Dua delved in to what it was like to work with one of her idols — Elton John.

As someone she’s looked up to her whole life, for Dua working with Elton was a real “pinch me moment.” And what made the whole experiences even more special, their re-work collab of a classic on “Cold Heart” climbed to number one on the charts.

As Dua revealed to Jimmy, as a token of thanks and in honor of their first time performing of the song together, Elton gifted Dua with a vintage diamond ring that belonged to him (IKR, so boujee, we love it).

Speaking of loving it, can we just take a moment to discuss the FASHUN moment Miss Dua was serving on the late night show. Okay so will admit that from the knees down, it was giving Sesame Street, but like in a fashionable way. But what we’re obsessed with is Dua's two-piece Area co-ord set. A heart-shaped crop top and matching mini skirt in a green and yellow houndstooth print. Now let’s talk detailing, for the top — a diamanté diamond embellishment, which was replicated for the front pocket slips of the skirt along some green and yellow feathery trim on the sides Safe to say, the outfit was giving the most.

Also during the appearance, Dua surprised an 80-year-old man named Papa Richy, who also happens to be one of her biggest fans. Seriously though, it was straight up adorbs. Check out the whole thing go down in the clip below.