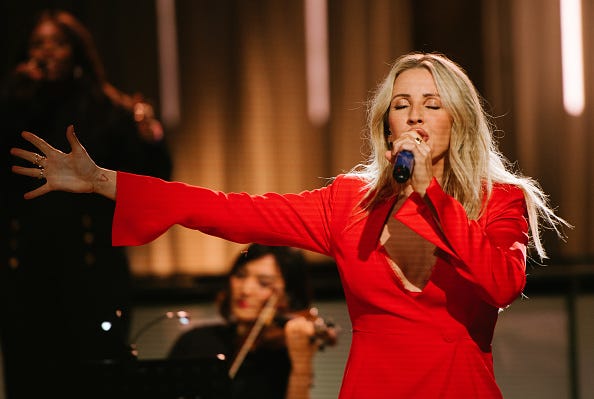 Ellie Goulding and her husband, Caspar Jopling, have announced that they are excited to be expecting their first child.

In an interview with Vogue, the singer shared that they discovered that she was pregnant around the couple’s one-year wedding anniversary. She explains, “that was not the plan. The thought of getting pregnant didn’t seem like it could be a reality. Becoming pregnant kind of made me feel human.”

Goulding who is thirty weeks along adds, “I want a better word than womanly, [but]— I have curves I’ve never had before. I’m enjoying it. My husband’s enjoying it.”

Throughout the entire pandemic thus far, she and Jopling have been isolating in England and have felt the strains of 2020 into 2021. “Because it wasn’t something I had planned for right now, [and] I knew it was a more solitary journey because of what’s going on,” explains the “Lights” singer. She adds, “I think that made me keep it very secretive and made me very protective over it.”

Ellie and her husband married in England during the summer of 2019.