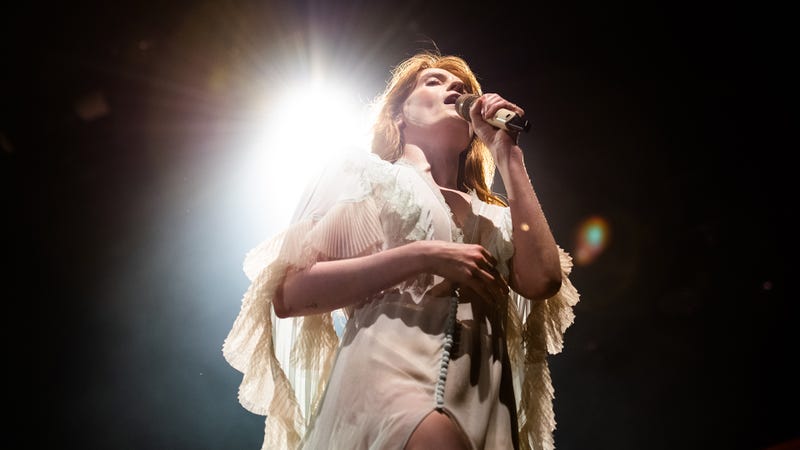 Florence + the Machine have announced a brand new track will be released this month. Even better, it will also be featured in the upcoming Disney flick Cruella and associated soundtrack offerings.

Florence + the Machine's "Call Me Cruella" will available on May 21, just ahead of the new film's release on May 28 in theaters and on Disney+. The upcoming, live-action Cruella features Academy Award-winning actor Emma Stone as the detestable character Cruella De Vil from Disney's beloved animated classic 101 Dalmations, set in 1970's London amid the punk revolution.

Sharing some of the new song's lyrics -- "I tried to be sweet, I tried to be kind, but I feel much better now that I’m out of my mind" -- singer Florence Welch also posted the exciting news on her Instagram saying "thank you to @disneycruella and @nicholasbritell for giving me the chance to fulfil my childhood dream of writing for an iconic Disney character."

“Some of the first songs I ever learned how to sing were Disney songs. And the villains often got the best numbers,” Welch said of her elation to be involved in the project. “So to help create and perform a song for 'Cruella' is the fulfillment of a long-held childhood dream. I’m so grateful to Nicholas Britell and Disney for allowing me so much creative freedom, and for trusting me with Cruella’s beautiful madness.” The film's composer, Nicholas Britell is a "massive fan of Florence’s," he says "so it was a true joy to collaborate with her."

"With both this song and the 'Cruella' score itself," Brittell says, "the goal was to really embrace the raw rock aesthetic of ’60s and '70s London. We recorded everything using all vintage gear and analog tape at Abbey Road and AIR Studios in London, melding orchestral elements with electric guitars and basses, organs, keyboards, and drums.”

The full soundtrack featuring Florence + the Machine's "Call me Cruella" will be available on May 21. Check out the official trailer for Cruella directed by Craig Gillespie and also featuring Emma Thompson, Joel Fry, Paul Walter Hauser, Emily Beecham, Kirby Howell-Baptiste, and Mark Strong, below.