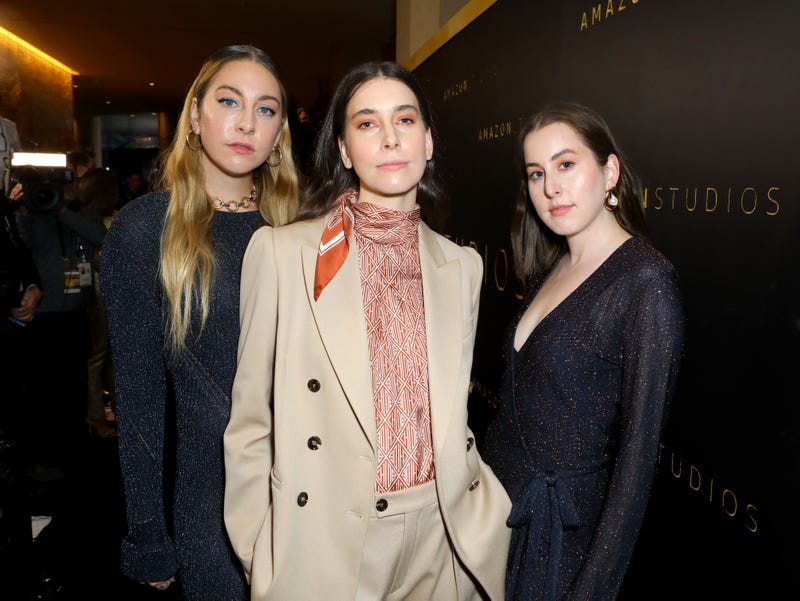 In 2020 the Los Angeles-based sisters, Danielle, Alana, and Este, of HAIM put out their third studio album. Women In Music Pt. III. The album that became the ultimate soundtrack of the summer of 2020 for HAIM fans everywhere, scored the band two GRAMMY nominations and allowed for women to dominate the rock category at this year’s award show.

WIMP III snagged a nomination for Album of the Year and their song “The Steps” garnered a nomination for Best Rock Performance. The San Fernando Valley natives caught up with Bryce Segall on RADIO.COM’s New Arrivals to talk about finishing their famed “Deli Tour,” share personal details about the making of WIMP III and of course discuss the “Olive Garden” line from “no body, no crime,” the track HAIM is featured on, on Taylor Swift’s evermore.

So the answer is “no,” the sisters never got to finish their highly sought-after “Deli Tour.” To celebrate the release of their third album HAIM planned to pack their bags and promote their new music in famed Jewish delis across America. From New York to Los Angeles the band planned to leave no kosher dill pickle unturned.

Honoring their roots, the valley girls planned this tour because their first show ever took place at the historical Fairfax district, Los Angeles deli, Canter's. Not only did HAIM play their first show at the Kibbitz Room, a small but famed venue located in Canters, but the album cover for WIMP III features Danielle, Alana, and Este behind the iconic, pastrami drenched serving counter at Canter's.

However, the kreplach-laden tour was cut short due to the ongoing pandemic. Este shares, “at some point we will finish it… we did two dates and it was two of my favorite shows we ever played.”

When asked what the specific intention behind the GRAMMY-nominated album was all about Danielle explains, “the first part of Women In Music Pt. III was the making of our song ‘Summer Girl’, that really informed the kind of spirit of the album, we weren’t even thinking about an album per-say.”

She continues, “we were like gently working on new music, I think we were all collectively burned out from the last five years of straight touring, and we had this idea for a song called ‘Summer Girl,’ which I started on my phone…. and everything was really quick with the making of it. I mean the writing of it took a minute, but the production of it took like a week or something, everything kind of came together super quick, which classically has not been the HAIM vibe." Este quickly interjects, “we don’t work like that!”

The group released “Summer Girl” in the summer of 2019 spontaneously, not knowing when they’d have a full album yet, but they enjoyed the spontaneity of putting out a track they really loved, allowing the one song to dictate the direction of the next record.

“Our fans seemed to really like that song so that kind of started a trajectory of just like being kind of not precious about everything, and I guess that was kind of like the thesis statement for the album, just go for it and don’t think too much,” explains Danielle.

The sisters also delve into their collaboration with Swift on the track “no body, no crime,’” which appears on Taylor’s second surprise album of 2020, evermore. First, Este is convinced that since the release of this track, the name “Este” will most certainly be the baby name of 2021, even betting Bryce a bagel if it becomes the name of the year.

The song starts with the lyrics, “Este's a friend of mine / We meet up every Tuesday night for dinner and a glass of wine / Este's been losin' sleep / Her husband's actin' different, and it smells like infidelity,” prompting the HAIM sister to be convinced of the name’s rising popularity.

When discussing the line that the internet fell in love with, “Este wasn't there Tuesday night at Olive Gardеn / At her job or anywhere,” Alana shares that her go-to order at Olive Garden is “breadsticks,” citing “sometimes that’s all you need!”

Many fans were surprised that “no body, no crime” marked the first time that HAIM and Swift had collaborated. Este jokes, “I mean yeah, we had opened for her on tour back in 2015, and I think we’d always kind of like joked about it, like when is it going to happen, and of course it took a ‘murder’ for us to make a song together.”

HAIM has been featured on many surprising tracks, from ASAP Rocky to Kid Cudi.
Danielle says, “It’s like summer camp when you like jump on people’s songs, it’s cool.” Este adds, “it’s also fun to see how other people work in the studio because I feel like we have such a specific language within ourselves.”

The group reveals that Paul Thomas Anderson was heavily involved in styling the visual aspects for WIMP III, from the iconic album cover to the direction of the music video for “Man From The Magazine.” “He had found these vintage photos of deli owners who were like super proud of their stash behind them, of like sausages and like meat, and he was like, ‘what do you guys think of this,’ and we were like ‘let’s do it!’” Alana tells us.

The band shares, “thankfully Canters Deli in LA has been super nice,” and recounts all the times that the historic restaurant has been woven into the evolution of their music. While featured on the cover of their album, the deli is also the backdrop for the “Summer Girl” music video and the “Man From The Magazine” visualizer. The sisters also remember, “actually we have thrown a deli rave at Canter's. In 2017 when our first project with Paul came out, we threw like a huge rager at Canter's, and Mark Ronson DJed, yeah it was like a crazy night.”

Finally, HAIM touches upon speculation about launching solo projects. Alana quickly says, “I don’t know if we’ll ever go solo… I can’t do music without my sisters.” Este jokes that if she ever released a solo project she’d drop a klezmer album “and then get like the ‘World Music’ nomination because there’s like a hole in the market.”

As of now, HAIM says they’re “waiting by the phone for the call that we can go on tour, that’s all we’re doing.”