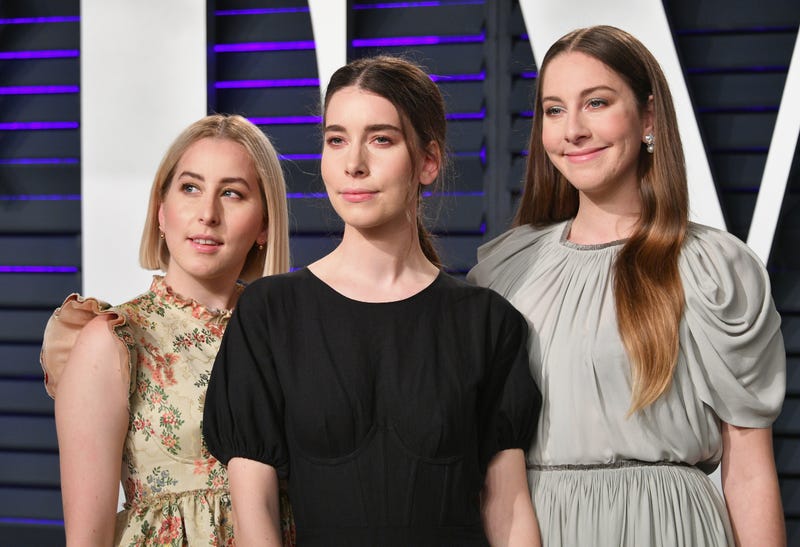 “So deck those halls, trim those trees, raise up cups of Christmas cheer,” because HAIM, aka our favorite valley girls and freshly GRAMMY-nominated artists, just gave us a cover of The Waitresses’ “Christmas Wrapping,” which isn’t just a Judaica themed bop, but also perfectly encapsulates the highs and lows of this bizarre year. “Christmas Wrapping 2020 (all I want for christmas is a vaccine)" is the only song we’ve heard this year that finally lays out what we’re all actually thinking.

Este, Alana, and Danielle collaborated with Thundercat for the incredible bass featured in the viral moment, and lyricist Jeremy O. Harris was the wordsmith behind HAIM’s holiday song.

As the three sisters come into view, of course, things start with classic HAIM choreographed dance moves, that the band often plasters on their Instagram page in order to teach their fans some of their signature moves. However, there’s something about this fantastically DIY video that serves us “making your family watch your living room performance after a huge meal of brisket and latkes” vibes.

In a year full of madness, HAIM dropped Women in Music Pt. III, a deeply personal album for the sisters that happened to snag them a GRAMMY nomination for Album of the Year and Best Rock Performance for their track “The Steps.” In the opening of their rendition of “Holiday Wrapping,” Danielle addresses the roller coaster year they’ve had with this little zinger, “woke up this morning thought I was still dreaming, album of the year nominees, seems like Jews are now mainstreaming.”

From promoting the idea of shopping small to touching upon popular Netflix shows, like Queen’s Gambit, to feeling under-sexed, to reminding us to “STAY IN PLACE,” to making note of Joe Biden and Kamala Harris’ historic presidential win, the HAIM sisters really leave no 2020 stone unturned. Also, it would be a shonda not to mention Este’s perfect icy blue lipstick, eyeshadow, and headband ensemble that shimmer throughout the video.

WATCH MORE: Why Jelly Doughnuts Are The Traditional Dessert For Hanukkah

We’ll be frank, this video is probably the single most accurate thing to come out of 2020. The way that HAIM managed to create a holiday piece that feels sarcastic, congenial, and compassionate all at the same hits at the root of how this mess of a year was also given a massive, multiplatform social media landscape to play out on.

HAIM’s “Christmas Wrapping” is clever and hopefully a song that we’ll only have to look back on and not relive. “Merry Christmas, Merry Christmas, 2020 has been mighty wild.”