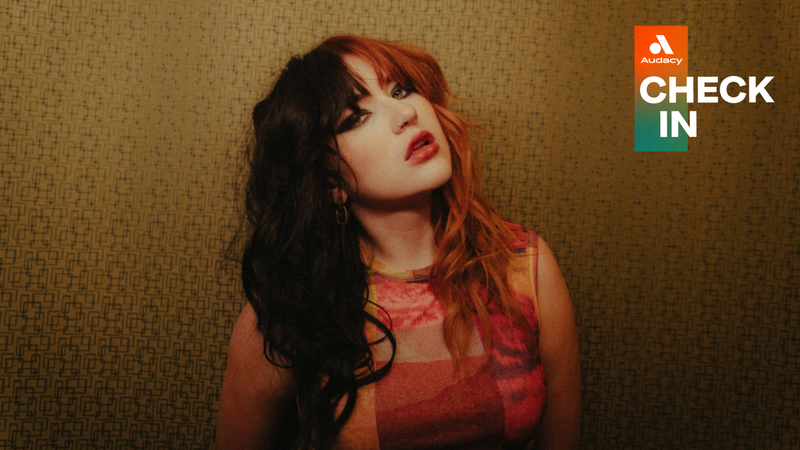 Already proven she's more than just a TikTok trend, GAYLE is here to stay, and we're all better for it. After straight up slaying the stage at Audacy Beach Festival, she joined us once again. This time for a chat, all about the amazing things she has coming up in the new year, including touring with Taylor Swift, GRAMMY noms, and more. Oh and surprise! She brought blackbear (who she’s previously worked with) along for the ride.

LISTEN NOW: Audacy Check in with GAYLE (and blackbear)

First things first, her GRAMMY nom, which GAYLE admitted led her to “tears,” (happy ones of course) the moment she found out, noting “I’ve really just gotten started.” So imagine what’s yet to come.

One thing we don’t have to imagine — is GAYLE going on tour with Taylor Swift, because that ladies and gents, is very much happening. Explaining how the two first met, GAYLE shared, having come up in the Nashville songwriting scene, “we were at this event called NSAI Awards, which is basically this organization that helps songwriters… and has done so much for the songwriting community.” GAYLE went on to explain that she was there to perform, while Swift was there to collect an award for Artist/Writer of the Decade, “as she should.”

“I was so glad I just got to be there and see her speech and see her play,” GAYLE continued. “I ended up singing and she heard and basically asked me if I toured after that. She asked me if I open up for people and she said she was gonna call me… and now I’m here.”

Sharing a bit of what she plans to do as T.Swifts opener, GAYLE wants “to be very particular about the covers  that I pick.”

“I really want to find a way to involve people going to the shows to help pick my setlist in some ways," she revealed. “Like obviously artistically I want to be making my decisions, while also still involving people that are coming to the show, because I want to know what people actually want to hear.”

When asked if there’s anything she might change about how her stardom unfolded, GAYLE admitted, “there's a few things.”

For one, some of the songs she put out might not have made the list if it was only one year later. And also, having come up in the age of the internet, GAYLE wishes she “wouldn’t let somebody's negative thoughts or like comments fully affect me in the way I always do, because it is hard and it is new, and it’s still something I’m trying to fully figure out.”

And lastly she added, “I wish I would have given myself more time to know that I was gonna grow up… to know that not everything is gonna stand the test of time, especially when you’re a teenager, all you do is just hate your younger self… so I guess just being more empathetic towards myself and what I’m going through.”

As for blackbear, who’s been in the game for a minute, he’s less concerned about the outside world and aimed to focus on his family. His plans for the future include being “a more present father,” and “to pay attention to my kids.” Noting, “the real hit records are like the two little boys that I made.” So for the next years he plans to focus less on work and more on them.

As for any future plans for GAYLE and blackbear to work together again, whether they were serious or not (we’re hoping yes, but probs not), blackbear said, “were gonna make a whole concept album together.” While GAYLE added, “we’re gonna start a band actually, Avril Lavigne and Machine Gun Kelly are gonna be in it… and Travis Barker.”

For all that and more, check out the entire interview with GAYLE and blackbear above. And to see a clip of GAYLE slay it at Audacy Beach Fest, that’ll be below.