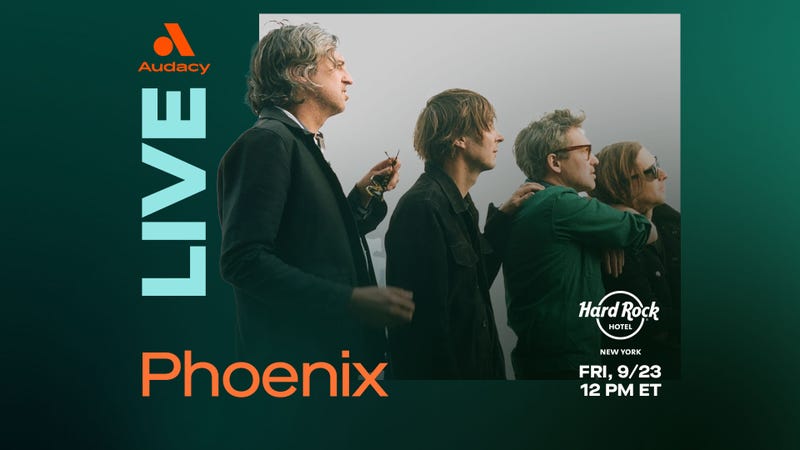 Phoenix is currently gearing up for the release of their first new album in five years, the follow-up to 2017’s Ti Amo, after releasing their single, "Alpha Zulu," on June 1 along with details about a fall headlining tour currently hitting the U.S., Mexico, the U.K., and Europe featuring Porches as support. The band's latest offering, "Tonight" featuring Ezra Koenig of Vampire Weekend, is out now. Interestingly enough, it's the band's very first collaboration, which began humbly on a whiteboard, frontman Thomas Mars reveals. "We name different parts because they might end up on different songs... and we named this part 'Ezra.' I guess it sounded like him," he explains. "This is definitely an experience that we really enjoyed. It was like a Christmas gift; every time he would send a file, it was better than we thought. It was really fun and we're really happy how he got involved."

Speaking about the five-year pause, Mars says, "We made a record.. it took three at least. So, 2017 we released 'Ti Amo' and then we toured for longer than we thought." Of course, COVID had to rear its ugly head in the time between then and now. "We had a great studio... somehow we recorded in the Louvre museum in Paris, and we spent our COVID in the empty Louvre for two years."

Guitarist Laurent Brancowitz explains: "A long time ago, I was in a yoga class -- everything is true -- and I was very bad but I made a friend." After about a year, he recalls, she began working at the Louvre around the same Phoenix started looking for studio space. " I asked my friend, 'what could I do?,' says Laurent. "She said, 'yeah, we have a room!' It was just a wonderful coincidence, they wanted to open up a residency for artists. We were in this part of the museum where my friend is the big boss."

One could only assume that working, writing, and recording in such a space surely opens a fount of inspiration. "I think more than we expected," says Mars. "I guess we wanted to be surrounded by something else than gold record... less pressure, a different kind of pressure. But during the pandemic there was only one entrance in the Louvre, so you'd enter and walk for 10 minutes, and you could choose the path. You could choose which section you wanted to see, and I think it played a little bit on our creative minds. It was like an artistic shower or some sort of cleansing before you write in the studio."

"It was also a mess," Thomas adds, "because usually when you go to a museum you see art in a curated fashion... someone presents art to you. Here, it was a mess. Our studio became a storage space, there were exhibits that didn't happen... and I have to say, I love the mess. I love the 'Raiders Of The Lost Ark' ending, you know, all the boxes everywhere. It was more mysterious and inspiring."

Check out our full Audacy Live with Phoenix above -- and stay tuned for even more conversations with your favorite artists at Audacy.com/Live.

See the current list of Phoenix tour dates scheduled through the end of November below, plus find details and ticket info right HERE.