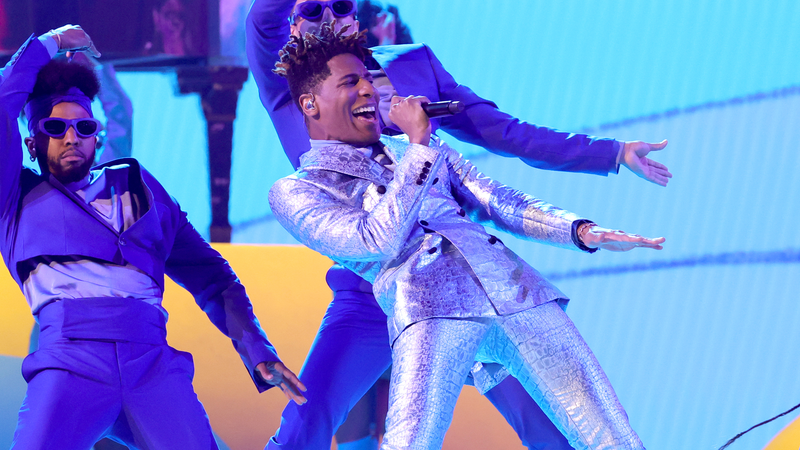 Jon Batiste (aka the most nominated person at the 2022 GRAMMYs) just threw the biggest party on stage during this year’s ceremony.

The only spot you need for all the nominees for this year’s big music awards show, listen to Audacy's Music Awards Radio

Letting “Freedom” ring with his joyful, dazzling, dance-filled performance, Batiste began seated with a powerful display on a grand piano while wearing a black cape, before ditching the robe to reveal a shiny silver suit to meet his bevy of backup dancers at the center of the colorful stage.

Gleefully singing, and moving his body with spastic swag, Jon captured the audience throughout. Eventually, Batiste’s onstage dance party spilled out into the audience, ending with him jumping on Billie Eilish’s assigned table. Urging all watching there and at home to “be yourself,” Batiste finished out the song by literally dropping the mic, to receive one of the biggest applauses of the evening.

.@JonBatiste has got the whole crowd moving 💃🕺 Are you watching the #GRAMMYs?

Entering the evening with 11 nominations, Batiste secured himself a total of 5 trophies — Best Music Video for “Freedom,” Best American Roots Performance and Best American Roots Song for “Cry,” and Best Score Soundtrack for Visual Media, for his Oscar-winning work on Soul. And drum roll please, the biggest award of the night… Album of the Year for We Are.

Congratulations Album Of The Year Winner - ‘We Are’ @JonBatiste #GRAMMYs pic.twitter.com/UJPztlDWy9