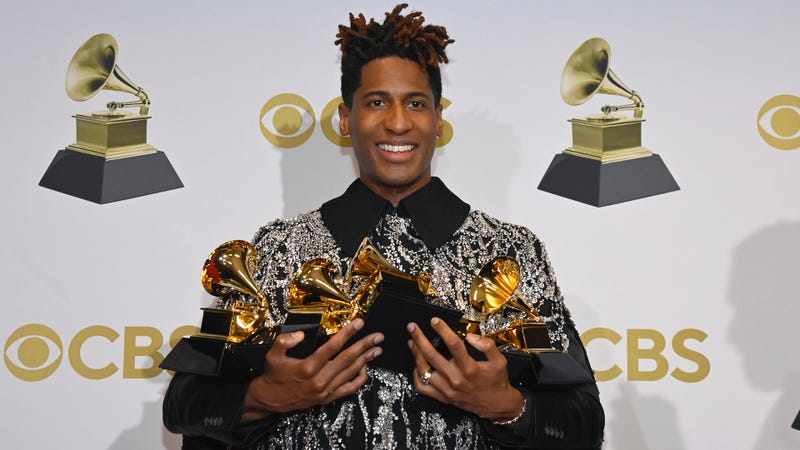 Jon Batiste has had quite the year. He reigned as the most nominated artist at the 2022 GRAMMY Awards with 11 total nominations. In total he took home five GRAMMYs, including the highest accolade of Album of the Year for his 2021 album, We Are.

In celebration of his win, we’re taking a look into Batiste’s recent conversation with music journalist Bruce Headlam on the Broken Record podcast where the two discussed Batiste’s musical roots, growing up in New Orleans, and his philosophical approach to music. Tap play to listen to the full episode below.

Batiste was born into a musical family. His father’s side of the family boasts a long lineage of New Orleans-based musicians, which led to a young Jon feeling ambivalent towards pursuing a career in the family business. While he was surrounded by music, Batiste preferred the likes of basketball and chess and claims that it wasn’t until he was 14 that he became actively interested in music.

Batiste accredits his peers and mentors for reigniting his interest in music. When Batiste was 14, his friend Troy Andrews, also known as Trombone Shorty (whose trombone-playing is featured on We Are), approached him on the courtyard in high school about starting a band together. The two teenagers began performing at the historic Maple Leaf Bar on Wednesday nights after school, and the rest is history. At the age of 17, Batiste released his debut album, Times in New Orleans, and, after graduating high school in May of 2004, he took his musical talents to the Juilliard School of Music in New York City.

Batiste always felt like he was destined to come to New York City, stating, “I had this feeling I wanted to leave New Orleans to explore the world because I had so many ideas about what I wanted to do and who I wanted to be. At a certain point, as beautiful as home is, and it will always be home for me, I felt like I needed to make a home for myself somewhere else.” Two of the songs on We Are touch on this coming of age theme - “BOY HOOD” and “TELL THE TRUTH.” “TELL THE TRUTH” specifically delves into a motto Jon’s father used to say to him, with Jon singing, “Tell it like it is, Love how you live, When you’re doing what you do, Just tell the truth.” Batiste has embodied his father’s wisdom through his music and his own life, telling Headlam, “This song is about [how] a lot of people may not see your truth as successful or as the thing you should be pursuing… I’ve always told the truth. I’m getting better at telling the truth of who I am and making it something that most people can understand…That’s the goal. It’s not about popularity, it’s about tapping into something in the soul of human kind that is universal and makes people feel like they’re not alone.”

While studying at Juilliard in 2004, Batiste met drummer Joe Saylor and bassist Phil Kuehn. The three began performing together around New York City in 2005 and were eventually joined by saxophonist Eddie Barbash and tubist Ibanda Ruhumbika. All together, they formed the band Stay Human, which continues to be led by Batiste to this day. Their debut album, Social Music, alludes to Batiste’s concept of “social music” which Batiste continues to philosophically build on in We Are. Batiste describes “social music” as having a, “galvanizing quality that can connect people and ideas and can take emotion and transmutate emotion to things that we don’t even know.”

Solidifying his New York residency, Stay Human joined The Late Show with Stephen Colbert in 2015. Since then, Batiste has gone on to make grand musical and social strides in the city. Batiste led peaceful, musical protests throughout New York City after the murder of George Floyd in 2020, stating, “It felt as if there was a collective consciousness that was focused on the same thing in a rare and tragic moment. But still, [it was] very poignant to see all of these voices rise up to speak to the same thing in contrast to the division that we were seeing and still see in the political sphere…There was this synchronicity and I felt it needed an injection of hope and I see music as being the real universal force of that.”

As an activist, it’s no surprise that Batiste was honored when former President Obama reached out to offer his thoughts on Batiste’s album. Batiste recounted Obama telling him that We Are is, “an important piece of American and music culture… It’s an incredible expression of our identity and our ideals as Americans.” Batiste pays homage to Obama in his song “WHATCHUTALKINBOUT” where he raps, “Didn't you hear the president sang? Obama was singing, 'Amazing Grace.' There's so many things I'm delighted to say, Remember when the country was bae?”

Overall, We Are is a grand testament to the musical and philosophical force that is Jon Batiste. The album ranges in genres from classical to jazz and features Batiste jumping between singing in falsetto to rapping. You can hear Batiste talking about his musical influences like Nina Simone and Jimi Hendrix, speaking with Congressman John Lewis, performing with his late friend Mac Miller and much more on this episode of the Broken Record Podcast above.