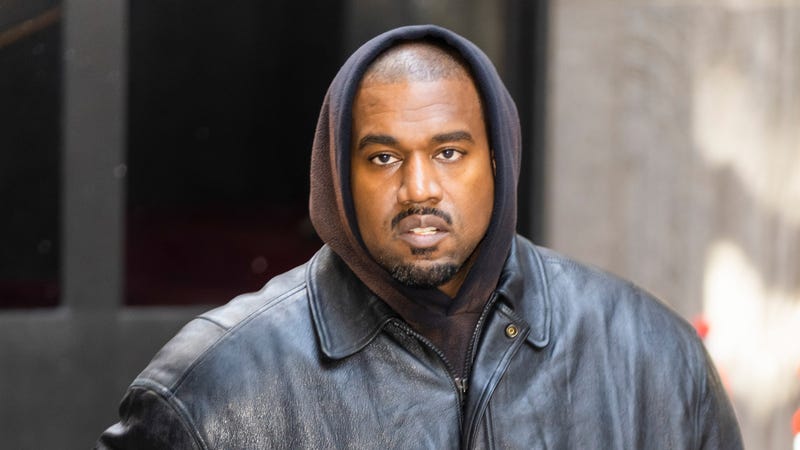 It’s been a minute, but last night Kanye West went on another one of his Instagram rants and this time he not only aired out his family drama, but also came for Hilary Clinton, Kwanzaa, his favorite target Pete Davidson, and more.

Stemming from an argument with his ex, Kim Kardashian, about where their four kids would attend school. Ye did what he do, and took to IG to share his thoughts and screenshots.

“I’m the kids father,” he wrote, claiming he was “driven crazy before,” and that “it’s not up to Calabasas or Hulu where my kids go to school,” assuring he “won’t stop until I have a say so on my kids no matter what it legally takes.” 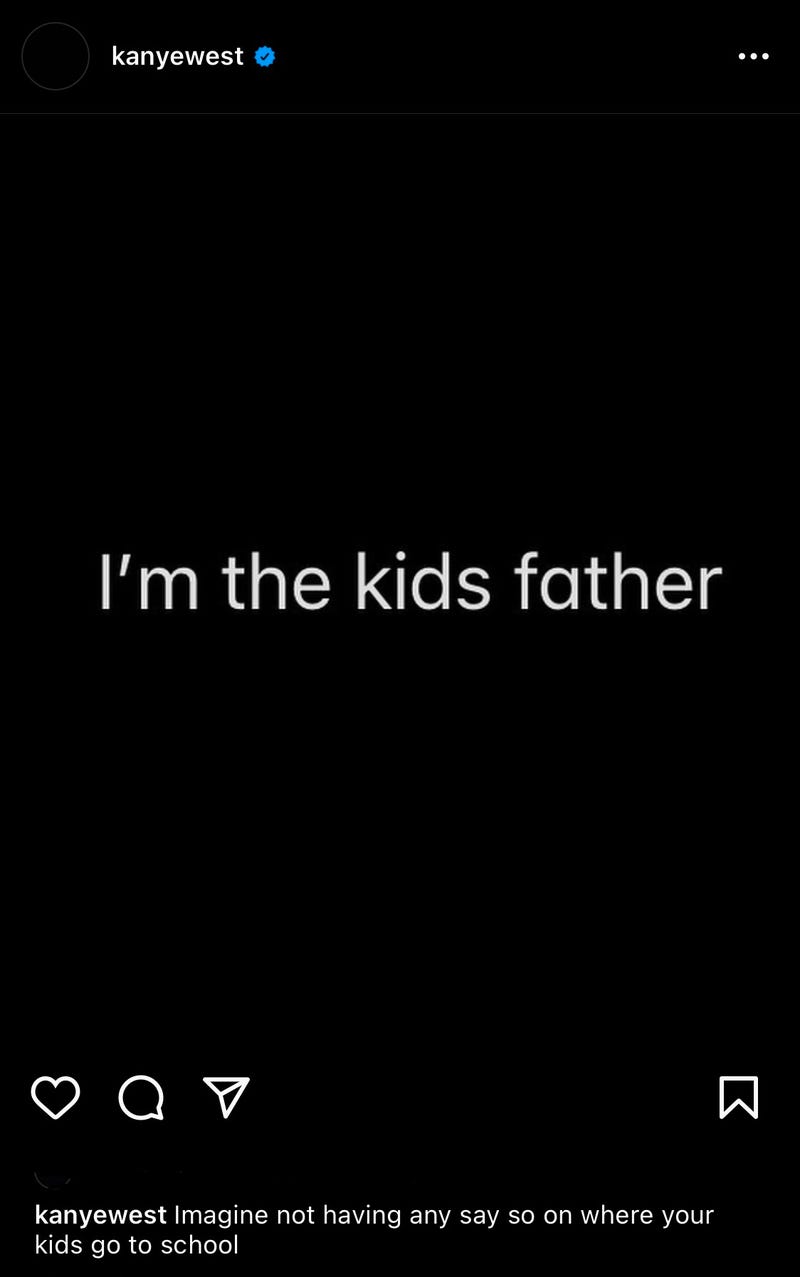 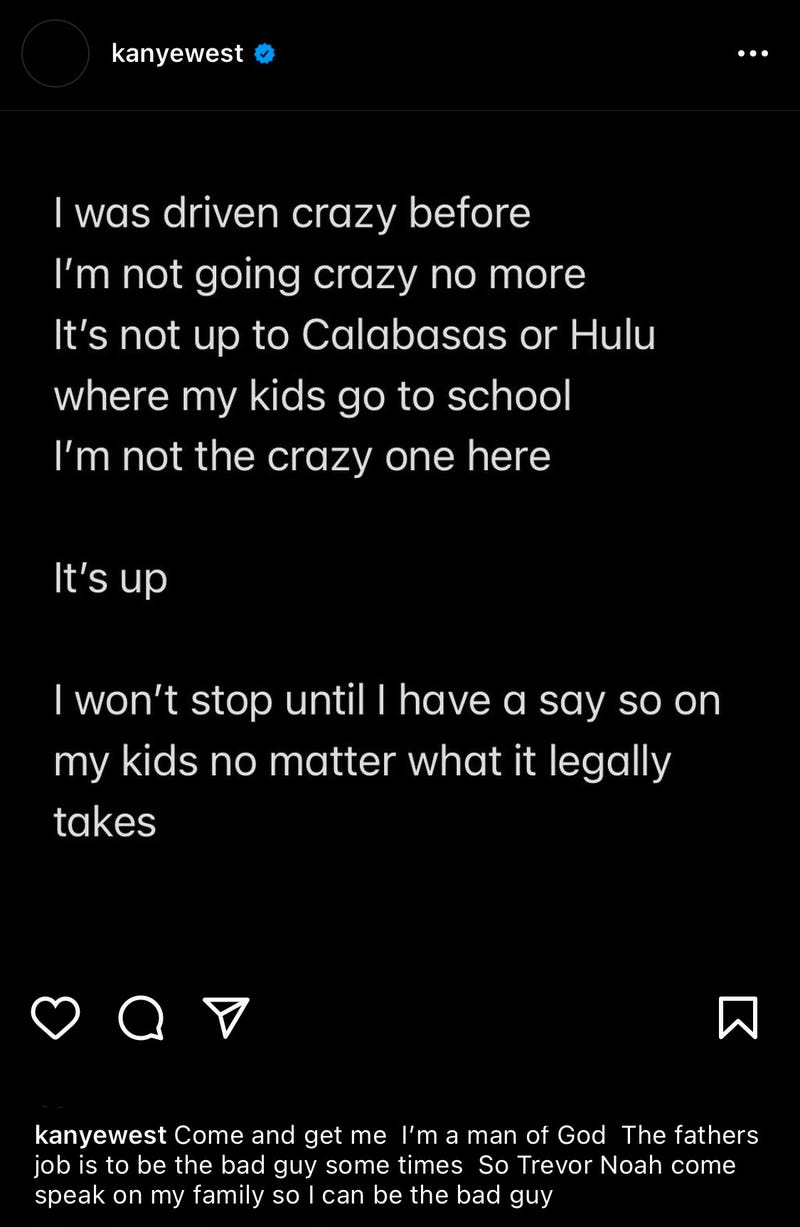 Also calling Hollywood “a giant brothel,” Kanye expressed that “Pornography destroyed my family,” and admitted to dealing “with the addiction instagram promotes,” adamant he wasn’t “gonna let it happen to Northy and Chicago.”

Then after claiming he was "about control" and firing shots at Gap and Adidas, Ye also came for Kwanzaa, questioning its origination and why it was being taught to Black students at California’s Sierra Canyon private school, which is clearly the school Kim wants her children to attend, as opposed to Kanye’s Donda Academy. 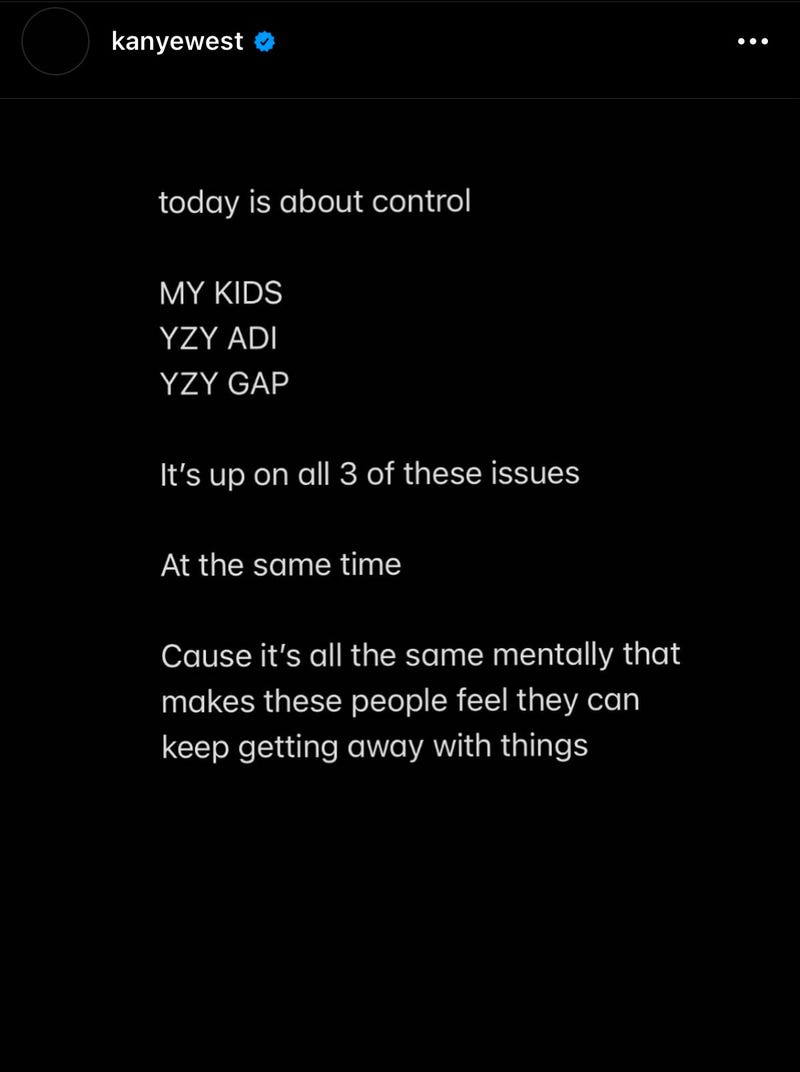 “What the f*** is Kwanzaa and who made that bullshit up?” Kanye wrote on Instagram. “Everyone lives in LA for the check anyway so no one really cares about their children being indoctrinated.” 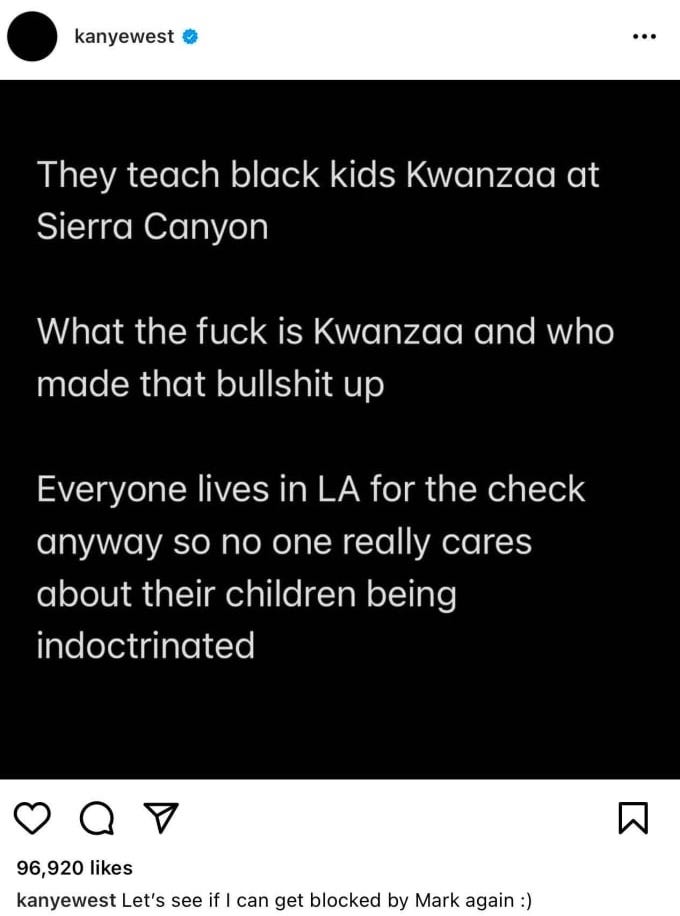 “My kids going to Donda. They not going to Sierra Canyon. Charlemagne the God and Kris. Get your motherf***ing popcorn,” the post read, with the added caption “Hi Hilary Hi Mark You gonna take me off instagram.” 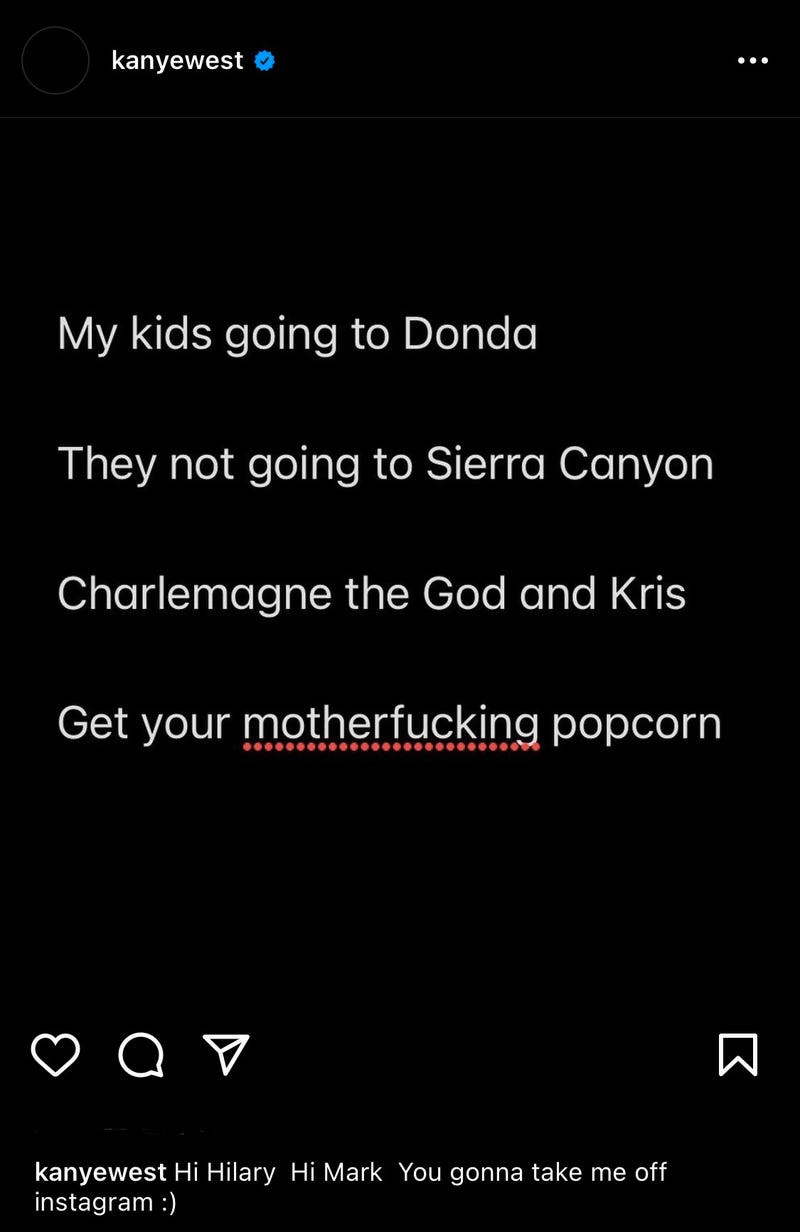 Once again concerned about the public nature of her ex's outburst, Kim reached out to Kanye, asking him to “please stop,” only to have parts of their conversation make their way to his IG feed. 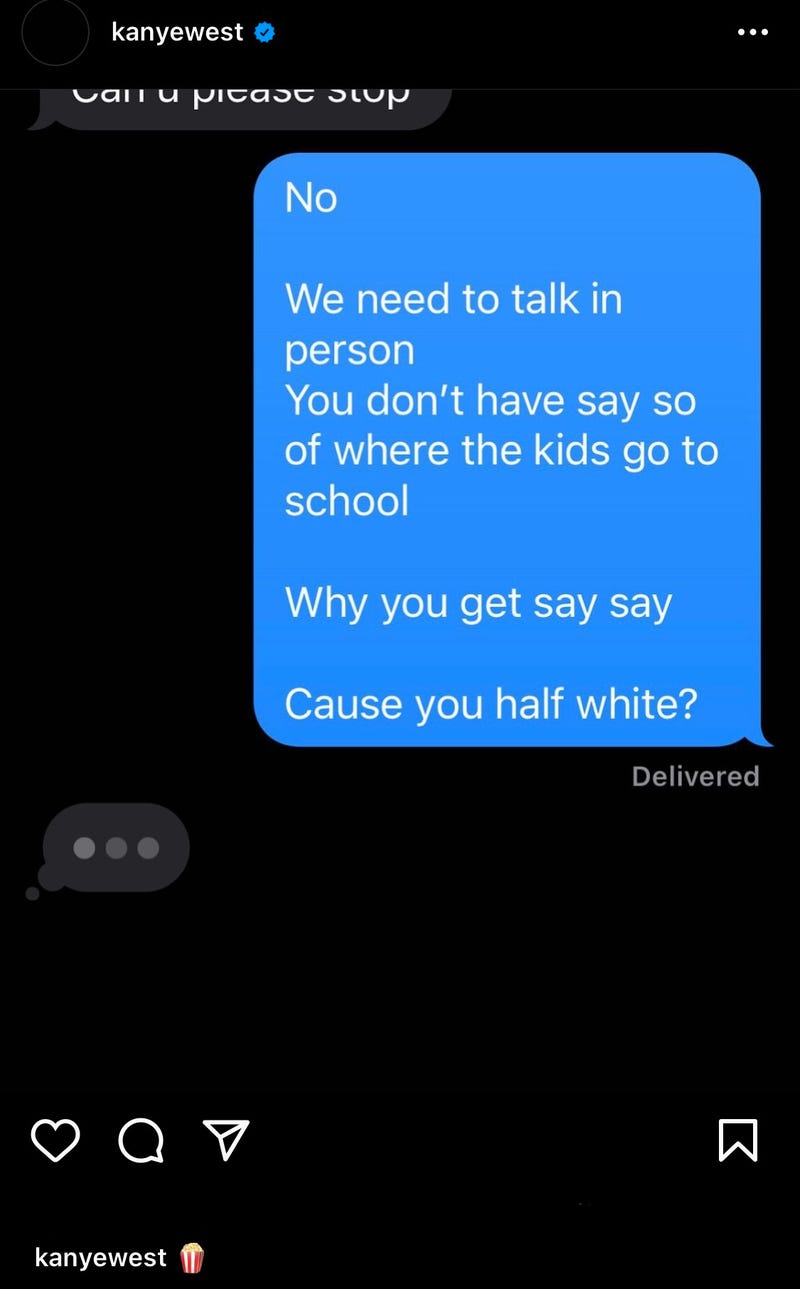 Kanye also called out Tristan Thompson, Travis Scott, and Scott Disick for being essentially nothing but glorified sperm donors to the famous female-led family, and also took time to attack Kim’s ex-boyfriend, Pete Davidson, writing “Ask Pete how those tattoos of my kids doing in the trauma unit.” 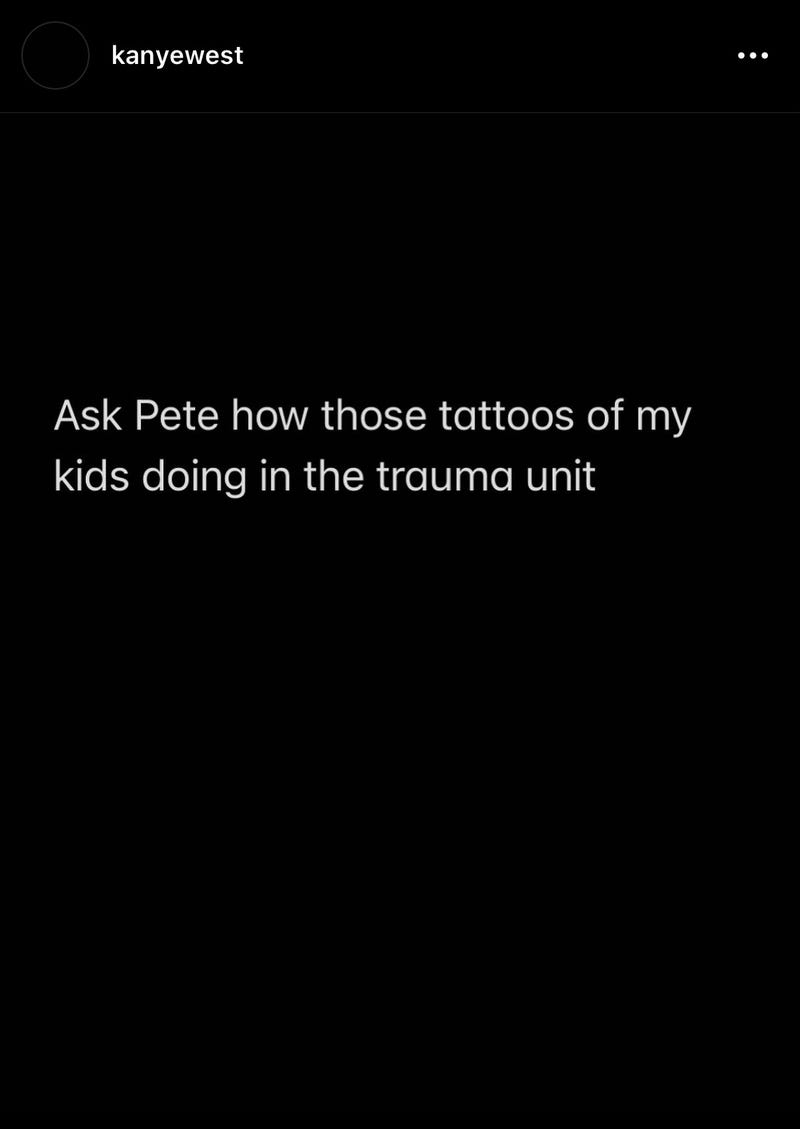 By the following morning, all evidence of the rant were deleted from West’s feed and replaced with a photo of some Donda Doves' first day at school, his explanation for the previous day’s posts, and a suggested co-parenting compromise we assume he texted Kim, in order to solve the initial issue at hand of which school his kids should attend. 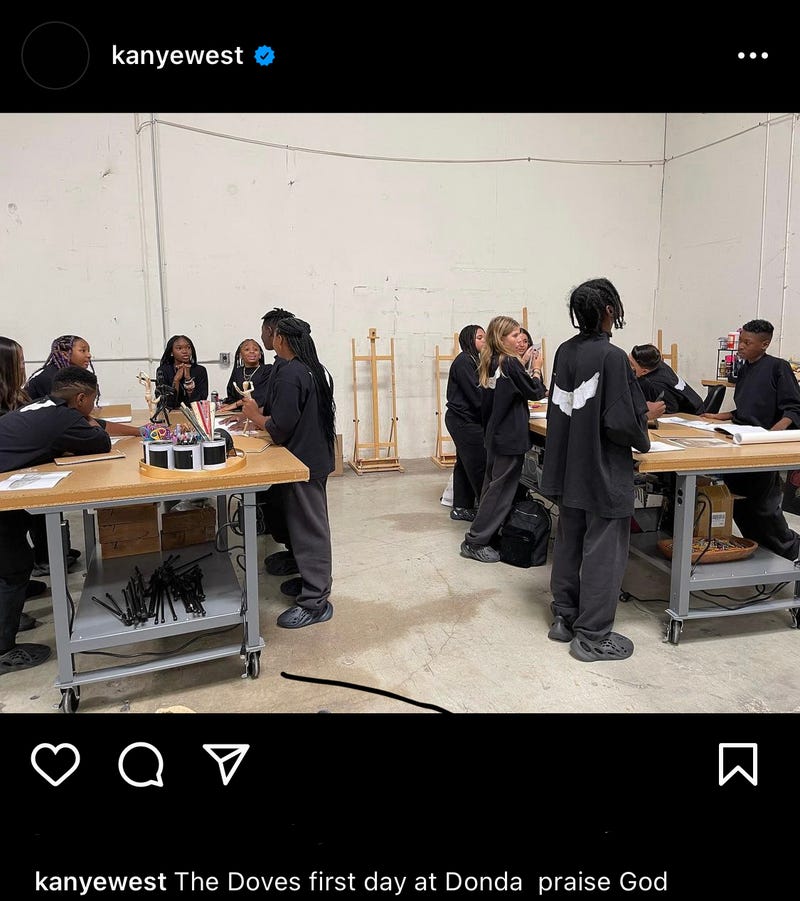 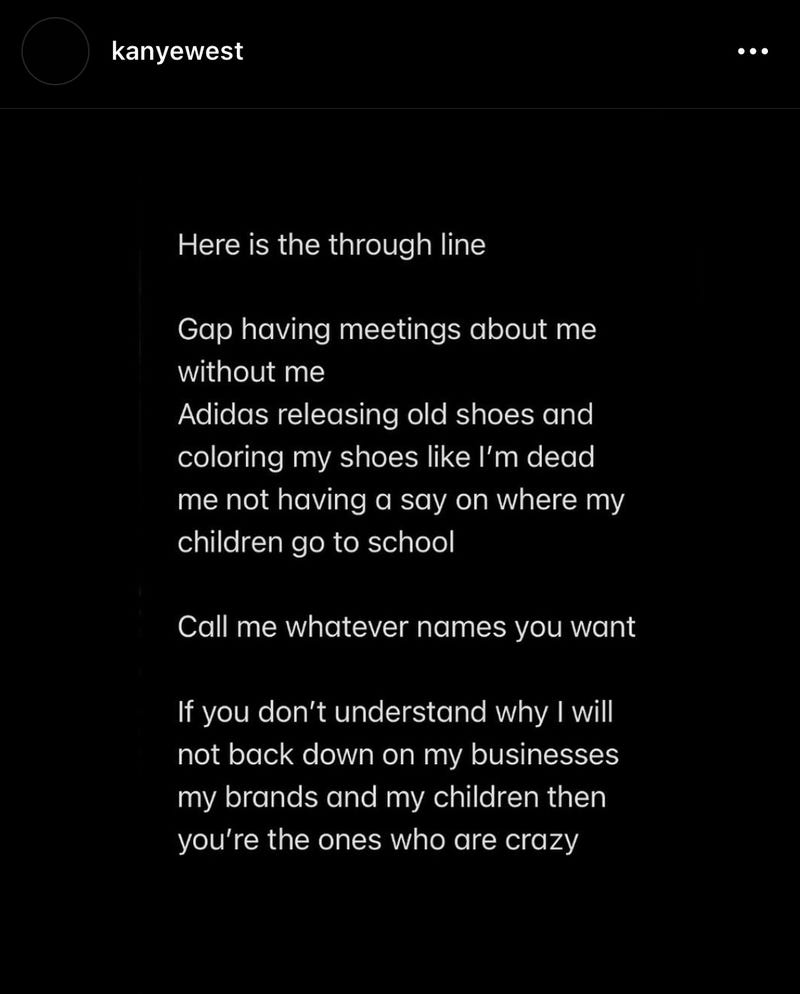 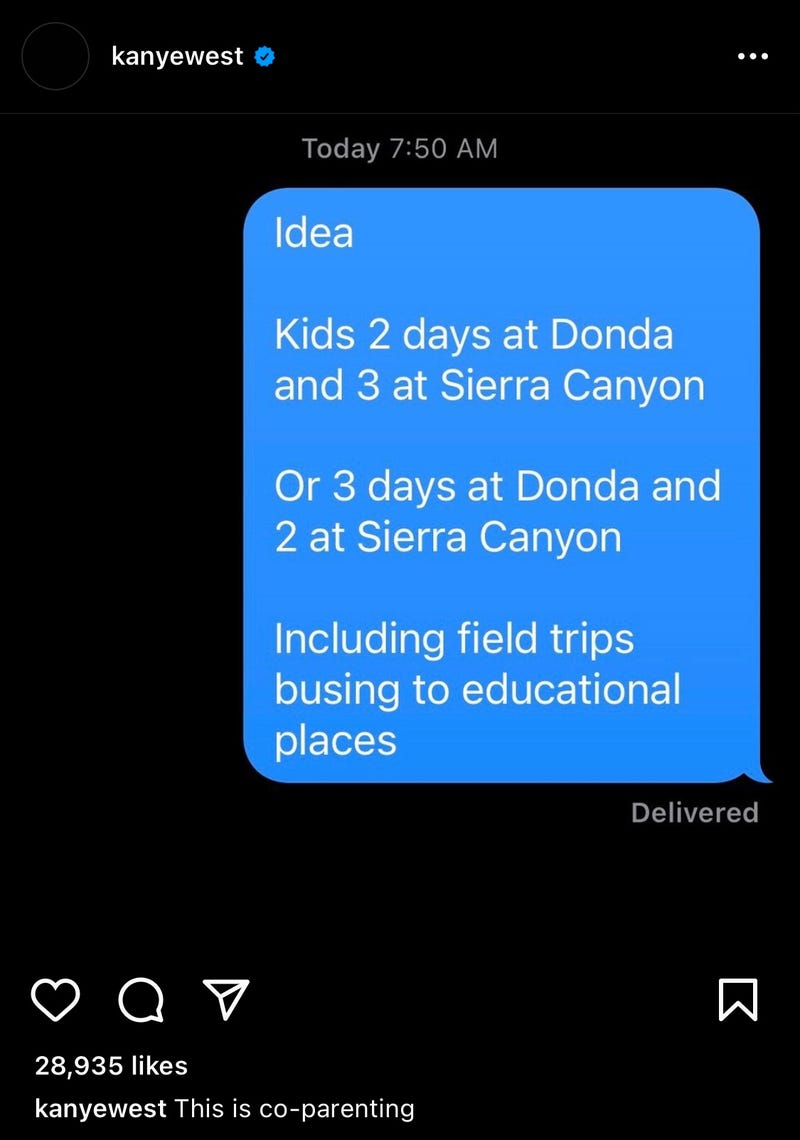