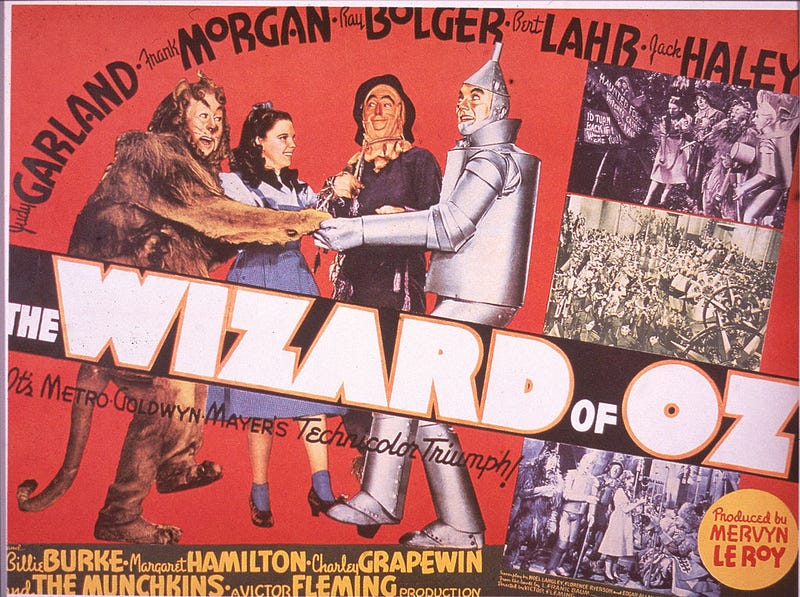 No, it wasn't on the side of the Yellow Brick Road.

A forgotten gift to Catholic University in DC, made by actress Mercedes McCambridge in 1973, has recently been rediscovered as the long-lost blue gingham dress of Dorothy in “Wizard of Oz.”

Well, one of the dresses. As is common, there were a few created, originally thought to be five of them worn by Judy Garland in the filming of the beloved 1939 classic. But needless to say, they are extremely rare.

As reported by the Washington Post, the story of the dress originally appeared in an article in the student newspaper from the time. Oscar-winner McCambridge was an artist-in-residence at the school back then.

In the student story, she alluded to the drug and alcohol addictions that had led to her “close friend” Garland’s death, and she hoped that the dress would be “a source of hope, strength, and courage to the students,”

As is also the case with film memorabilia, the legendary dress was soon packed away somewhere in the drama department building on Catholic’s Northeast Washington campus, forgotten, and lost to time. So lost, its existence became somewhat mythical.

In 1973, @cuatower wrote about a gift to CatholicU meant to be a source of “hope, strength, and courage” to students. The gift was a dress that is believed to have been worn by Judy Garland in “The Wizard of Oz.” pic.twitter.com/x1wy0P7oMr

Matt Ripa began working as a teacher in that drama department at Catholic University in 2014. When he heard of the legend, he took to poking around sometimes in hopes of finding it.

On June 7, while clearing out clutter for a building renovation, he reached for a box atop a rack of faculty mail slots near his desk — and there it was.

“As soon as I popped the top off the box, I knew what it was,” Matt Ripa said. “I saw that blue gingham and I just started laughing and laughing. I mean, I’m still laughing. Because I was shocked, holding a piece of Hollywood history right in my hands.”

To which he then yelled to a colleague, "Get some gloves!"

In a kind of slip-up that you think only happens in the movies, the box was actually found not long ago by retiring drama professor Thomas Donahue, who discovered the dress while cleaning out his office, and, knowing the dress intrigued Ripa, tossed it in his office with a simple post-it saying, “I found this.”

Not detailing what “this” was, someone just placed the box on top of the mail slots, where it has been sitting since.

The next step was of course authentification, which the Post explained:

“Ryan Lintelman, entertainment curator at the Smithsonian’s Museum of American History, was summoned to the drama department. In an interview Thursday, Lintelman said he knew of five authenticated Dorothy dresses from the film still in existence, all identical. The one at Catholic would make six."

"Among other telltale characteristics, he said, a hidden pocket for Dorothy’s handkerchief was sewn into the right side of each dress, and the star’s name and a wardrobe number were discreetly penned on each outfit by what appears to have been the same hand. After examining the dress, Lintelman and two of his colleagues gave it a thumbs-up.”

Lintelman was excited, but a little jealous, as the Smithsonian already has a pair of Dorothy’s ruby slippers, a Scarecrow costume, a Technicolor camera from the “Oz” set, and an original script. But alas, no dress.

“We’d certainly be open to a transfer,” Lintelman said wistfully, “if that’s ever in the cards.”

It might not be, at least for awhile. Upon the authentication, the university instantly released a glowing statement of, “It’s not in Kansas anymore. It can now be preserved in proper storage in a temperature- and humidity-controlled environment” as part of the school’s “special collections.”