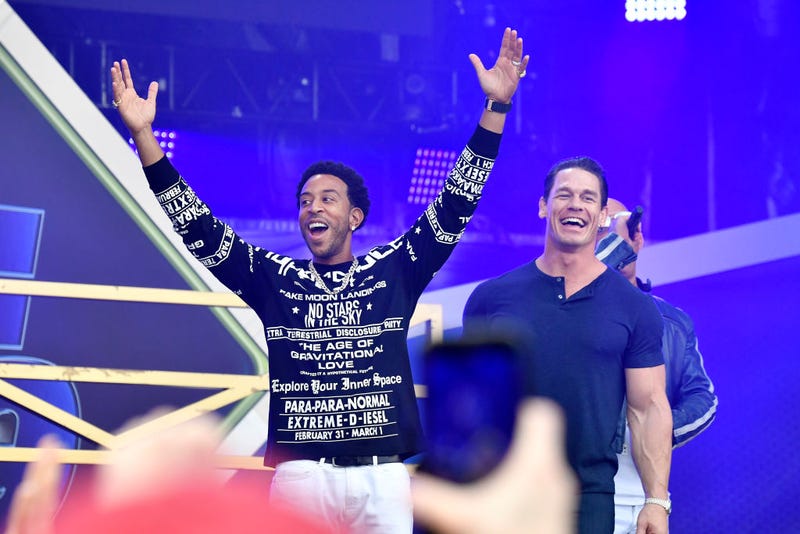 At one point, Sykes bridged the seemingly crazy, fandom dreamt-up Internet rumors of a “Jurassic World” / “Fast & Furious” franchise crossover blockbuster, and if it might actually be bubbling around some Hollywood development office.

If it sounds nutty, remember the most recent installment, "F9," featured a circa-1980s Pontiac Fiero flying up into space. When a film franchise edges towards double-digits, anything is possible, right?

But Ludacris was quick to put the kibosh on that crossover idea.

“That’s the most ridiculous thing I’ve ever heard in my entire life,” Ludacris said to a big laugh from the audience.

“Look,” he continued, “they surprised me in this franchise with a lot of things of how we continue to top ourselves. But nowhere in my right mind do I see 'Jurassic World' and 'Fast & Furious' coming together. Maybe they gotta convince me but I just don’t see it. That’s ludicrous. Pun intended, for sure.”

To which the witty Wanda retorted, “So you’re saying it’s ok to go to space in a Pontiac, but you can’t mess with dinosaurs?”

To which the rapper responded, “I’m trying to say all these fast cars and dinosaurs together, it doesn’t make sense to me. But yeah, you’re right. Both of those are ludicrous. You’re 100 percent correct.”

Wanda then pushed the topic and asked about a possible “Fast & Furious” / “Godzilla” meeting. Ludacris laughed off that one too.

The two went on to discuss, among other things, the strip club scene in Ludacris’ town, and a traffic sign in Virginia, Sykes’ town, that said, “Driving Fast & Furious? That’s Ludacris” -- of which the man himself was quite proud.

“At first I thought it was a joke…” he said. “But I think as artists and entertainers, we always want to make art and to do things that are ingrained in popular culture. And that right there just let me know that Ludacris and the 'Fast & Furious' franchise are… household names. It humbled me and it makes me feel great that we have fans all over the world that are actually going to put that on a highway and try to get people’s attention. So much love to everybody!”