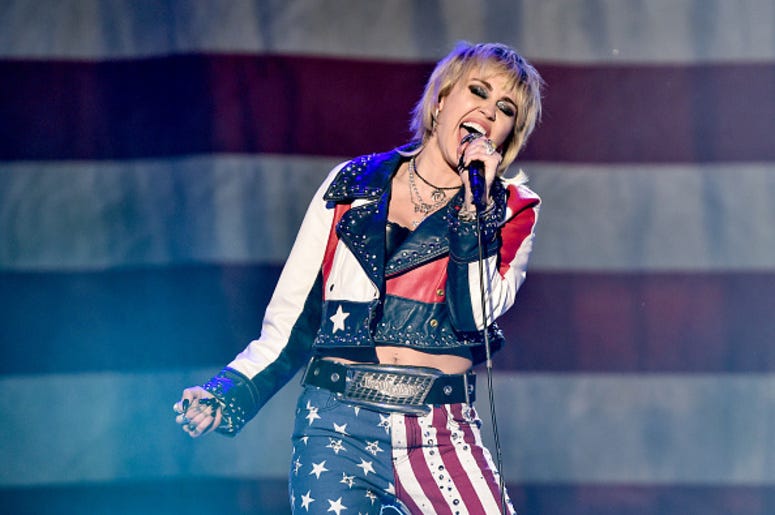 The 2021 Super Bowl was full of performances, but it was the event before the big game that had plenty talking.

Miley Cyrus was tapped to perform during the game’s pregame show, and the singer had big plans for the TikTok Tailgate. Cyrus went through a number of hits including a special shoutout to Britney Spears during "Party In The USA," along with some covers. But she also stunned fans by bringing out Billy Idol and Joan Jett during the show.

The performance took place outside Tampa Bay’s Raymond James Stadium before the Super Bowl began on Sunday. Cyrus started with a cover of Toni Basil’s "Mickey" and Blondie’s "Heart of Glass," before welcoming Joan Jett to the stage to sing "I Hate Myself for Loving You." According to Rolling Stone, she later brought on Billy Idol for a cover of "White Wedding."

Many fans were surprised and excited by the special guest appearances, but also blown away by her emotional version of "Wrecking Ball," which saw Cyrus break down and admit "it never gets easier" during the performance.

"It never gets easier" - Miley crying during Wrecking Ball 🥺 pic.twitter.com/UWtzGrX5BH

Cyrus’ set was full of covers, including Nine Inch Nails’ "Head Like a Hole," Bikini Kill’s "Rebel Girl" and Dolly Parton’s "Jolene." Clearly the singer was able to handle the pressure of starting the day’s festivities.