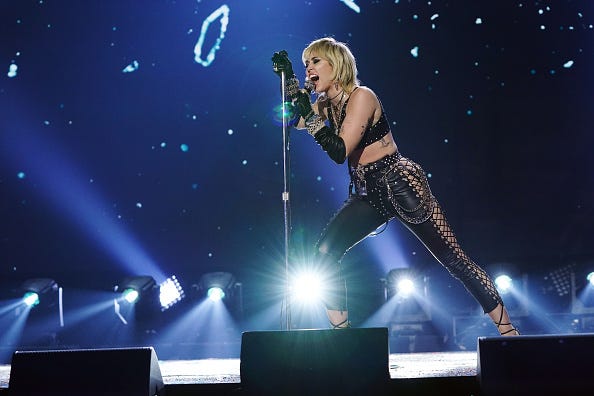 NEW YORK (1010 WINS) -- While ABC has “New Year’s Rockin’ Eve,” NBC is reportedly trying to bring a bit of rock to its end-of-year celebration.

Miley Cyrus is set to host a Lorne Michaels-produced New Year’s Eve special to kick off 2022, according to Vulture.

While not yet officially announced, Cyrus would replace Carson Daly on their New Year’s show, who has fronted it since 2004.

According to the report, the NBC bash would span multiple hours, multiple cities and several musical guests — but exactly where Cyrus would be hasn’t yet been decided. Discussions have considered Miami over New York City.

NBC is looking to make a bigger splash in the New Year’s numbers against “Dick Clark’s New Year’s Rockin’ Eve” hosted by Ryan Seacrest. The ABC show hit 18.4 million viewers in late-night in 2020, while NBC only hit about 7.3 million, according to The Hollywood Reporter.

Cyrus actually performed from Hollywood on 2020's "Rockin' Eve" show, and was the musical guest on "SNL" back in May.

Michaels is due to be an executive producer, but isn’t expected to run the show on Dec. 31, according to Vulture.