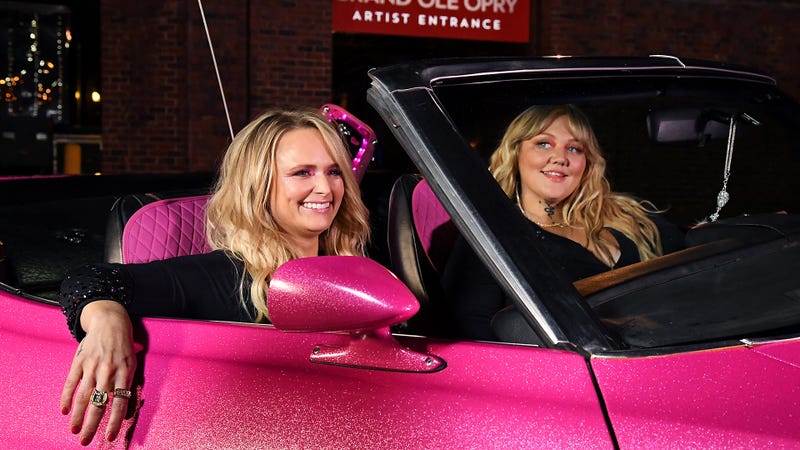 Let's all raise a glass for Miranda Lambert and Elle King, whose hit duet "Drunk (And I Don't Wanna Go Home)" has officially made its way into the history books.

Listen to your favorite music now -- curated for fans, by fans -- on Audacy’s Miranda Lambert Radio, and more!

Miranda and Elle's 2021 single is now the first female duet since Reba McEntire and Linda Davis' 1993 collaboration "Does He Love You" to top the Billboard and Mediabase airplay charts, and Miranda was sure to thank them both for paving the way.

Announcing the news to her followers with kind words and awesome snaps from the music video, Lambert first said King "is one of my favorite artists and one of my favorite people to be around," adding, "I’m proud to call her my friend and I’m so glad she asked me" to do this song.

And the fact that a duet by 2 women hasn’t been #1 in country music since 1993 is crazy to me. So the fact that we got here today means even more because it’s bigger than us. Thanks @Reba & Linda for paving the way. Now let’s get drunk and not wanna go home! @ElleKingMusic pic.twitter.com/Ez5AORI9SR

Lambert then turned her attention to the historical significance of the achievement saying, "the fact that a duet by 2 women hasn’t been #1 in country music since 1993 is crazy to me. So the fact that we got here today means even more because it’s bigger than us. Thanks Reba & Linda for paving the way. Now let’s get drunk and not wanna go home!" Reba herself was quick to respond saying, "Congratulations ladies!!!! Long overdue. Have a drink for me!"

King was also thrilled about the milestone, offering words of appreciation to her followers saying, "Thank you so much to Country Radio for giving me and my girl Miranda a shot. And to all of the Country fans out there, I LOVE YOU! The life of this song has taught me so much, everything has its own time and path. And when in doubt, add Miranda Lambert!!! I am so thankful to you Miranda, you are a shining light, and there’s no one I enjoy singing with more, than you... I am so unbelievably proud of us, and our song, and to say, matter of factly, that I finally know what genre of music I make….AND ITS COUNTRY!”

King adds, "To all of my fans who have been with me through all of the sounds and songs I have made, I am so grateful to be on this journey with you! Thank you to everyone who lets me express myself. There is no ceiling or box made to fit my ass! So I don’t plan on having them be part of the equation!”

King's love of Country has been on her mind quite a bit lately, and it seems she plans on sticking around for a while. “Ever since I’ve kind of tripped and fell into Country, it has been so joyful and so fun, but also so loving and so wonderful," she recently told Audacy's Rob + Holly. "People are happy in Country music.” Listen to their full chat above!

Browse and favorite more of our all-new Country stations like Audacy New Country, Tailgate Crashers, Jake Owen's Tiki Tonk, Country Edge, and Katie Neal's Leading Ladies for the best from the female side of Country music.