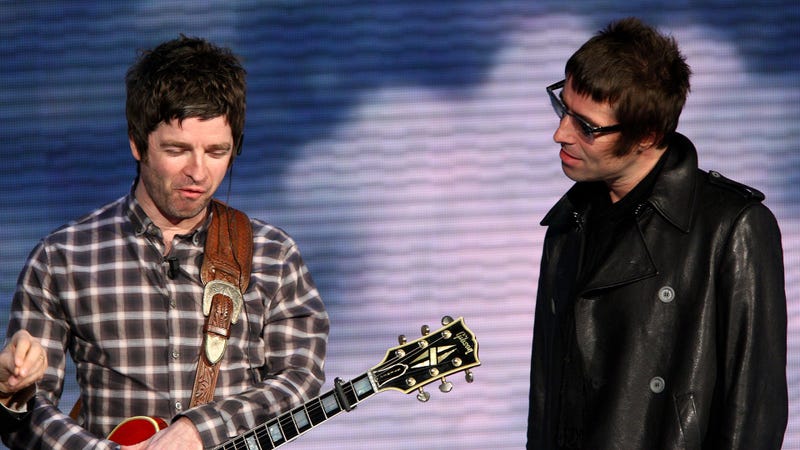 Leave it to the Brothers Gallagher to provide us with fighting words when they're not even in the same room together.

In a new interview, Oasis' principal songwriter Noel Gallagher offered some insight into the now-defunct band's most beloved album (What’s the Story) Morning Glory? as well as his brother Liam's lack of musical knowledge.

In the new edition of MOJO magazine, Noel explained how his estranged brother hated their track "Wonderwall" before it had become a worldwide hit, likening the sound to the trip-hop stylings of their British contemporaries Portishead, and Massive Attack. "There speaks a man who’s never heard trip-hop," Noel tells MOJO.

It all unraveled when Noel was asked if he knew when penning a song during the band's tenure whether or not he planned for it to be sung by himself or Liam. Noel said, “the only time I laid down the law was ‘Wonderwall’ and ‘Don’t Look Back In Anger.' I was so f***ed off with him walking off stage and me having to take over and do the gig. I remember thinking, if I’m going to do this, I want a big f***ing song to sing." Noel continued, adding that he told Liam, "'you’re singing one or the other, but not both.’ He hated ‘Wonderwall’. He said it was trip-hop."

“He wanted to sing ‘Don’t Look Back In Anger’," says Noel. But as all fans are aware, it ended up turning out just the way Noel wanted it -- and the band was better off because of it. "It became apparent during the recording that 'Wonderwall' was going to be *the* tune. If I’m being honest, I shouldn’t have sung either of them because I wasn’t really a singer then."

Sadly, it seems we can likely chalk Oasis up to Rock n' Roll mythology at this point. Noel, who has been tapped this year as an official Record Store Day ambassador, decided to shoot a few stars out of the sky by admitting in this interview that he doesn’t like "any of the records" on the band's 1995 release, and he also recently destroyed all hopes for an official reunion.

Telling Australia’s The Project at the end of April that the band's legacy is already "set in stone," Noel rubbed it in a bit saying, "if people have seen us, they’ll understand what all the fuss is about. If you didn’t see us, then that’s tough cuz I’ve never seen The Beatles or the Sex Pistols."

"People ask me that question on a daily basis and I can only say to you that, I just don’t feel like it," he explained. "When you’re in a band, it’s an absolute compromise, so no I don’t think I could come up with an idea and then run it by four people, and then six weeks later somebody knocks it back because their cat's got a cough. So, I like to march to the beat of my own drum. Oasis is done I’m afraid."