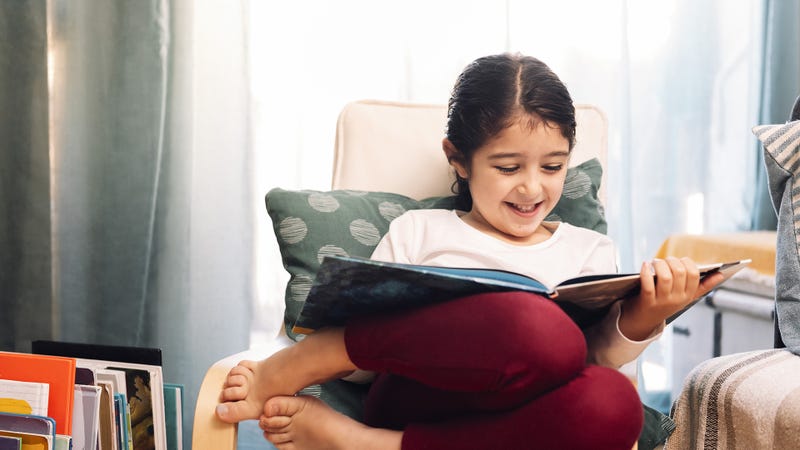 The new titles are based on songs and lyrics by the Pixies' Black Francis, Coldplay's Chris Martin, and singer/songwriter Paul Simon.

“We are looking to include a wide range of musical genres — including rhythm and blues, rock, pop, punk, hip hop, and country — to create books that appeal to a diverse array of children and families,” said Johnny Temple, publisher of Akashic Books. “The idea of giving parents, grandparents, teachers, and caregivers a way to connect kids with music early on through picture books is exciting. And when adults sing the lyrics as they read the books, it becomes a multimedia experience, introducing books and music at the same time.”

Where Is My Mind? is an imaginative picture book based on Black Francis’ lyrics to one of the Pixies’ most beloved songs, released on their certified gold album Surfer Rosa, and later appearing in the film Fight Club. 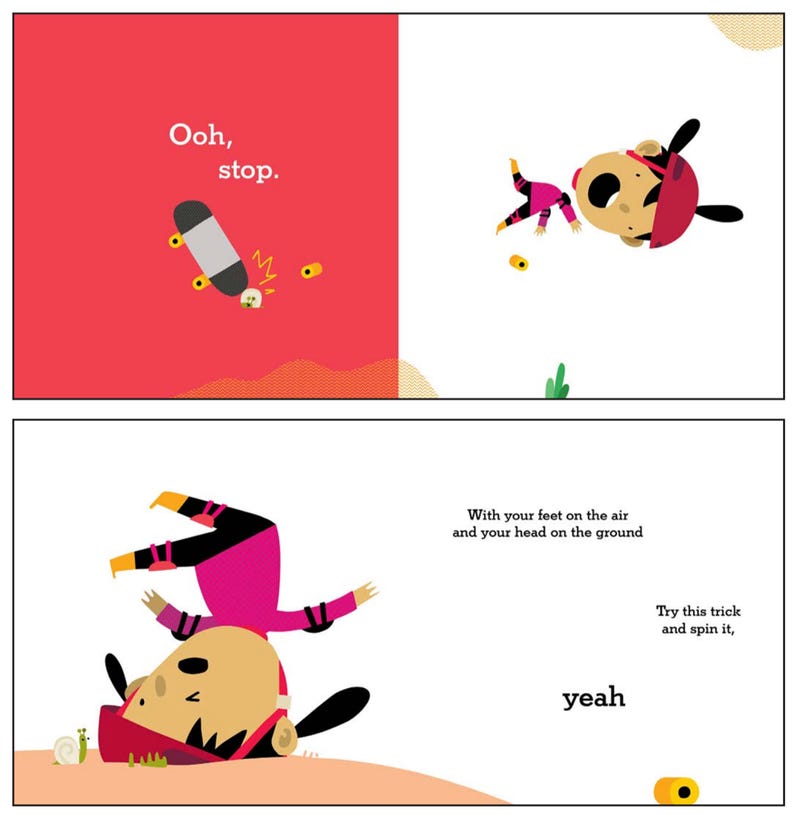 "Where Is My Mind?" Photo credit Akashic Books

Parents and children alike will delight in following the story of a young girl who loses her mind when she falls off a skateboard, then travels to magical lands in search of it. Brilliantly illustrated by Alex Eben Meyer, Where Is My Mind? is a celebration of creativity, both in song and story.

Strawberry Swing is a tenderly illustrated picture book of one of Coldplay’s best known songs. It was the fifth single released from their 2008 hit album Viva la Vida or Death and All His Friends, and gained widespread acclaim for its accompanying stop-motion animation music video. 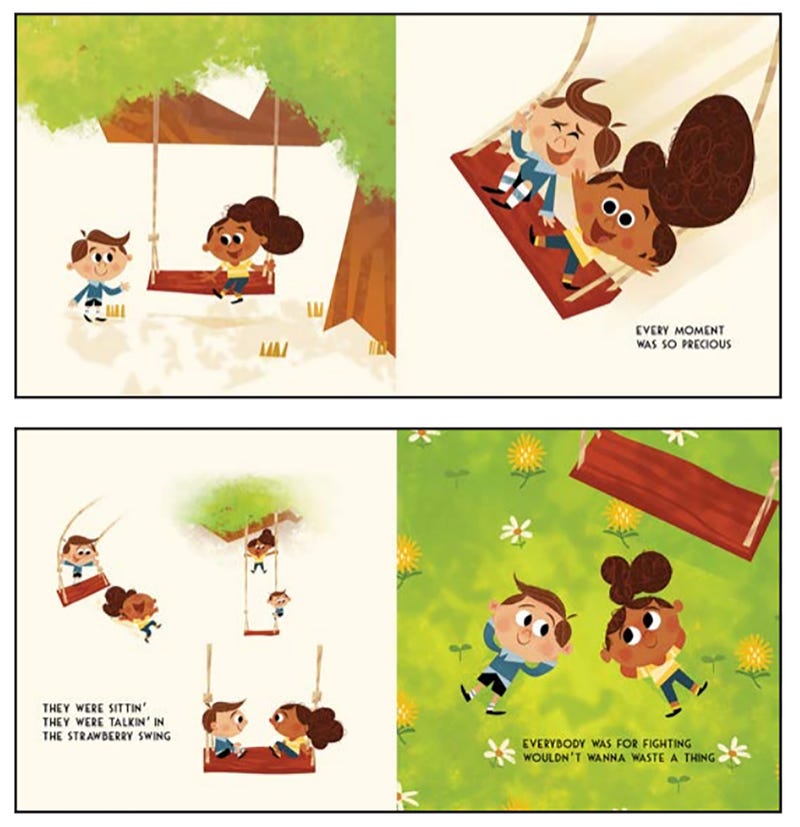 With lyrics by Coldplay and illustrations by Mitch Miller, Strawberry Swing tells a sweet story of friendship, encapsulating the innocence, fun, and struggle of finding someone special—and wanting to share every moment with them.

The 59th Street Bridge Song is a lively picture book based on legendary songwriter Paul Simon’s classic hit, created when he was one half of the duo Simon & Garfunkel. The song first appeared on their 1966 album Parsley, Sage, Rosemary and Thyme. In the US, the album peaked at number 4 on Billboard’s weekly Top 200 albums chart, and eventually went on to sell over three million copies in the US. 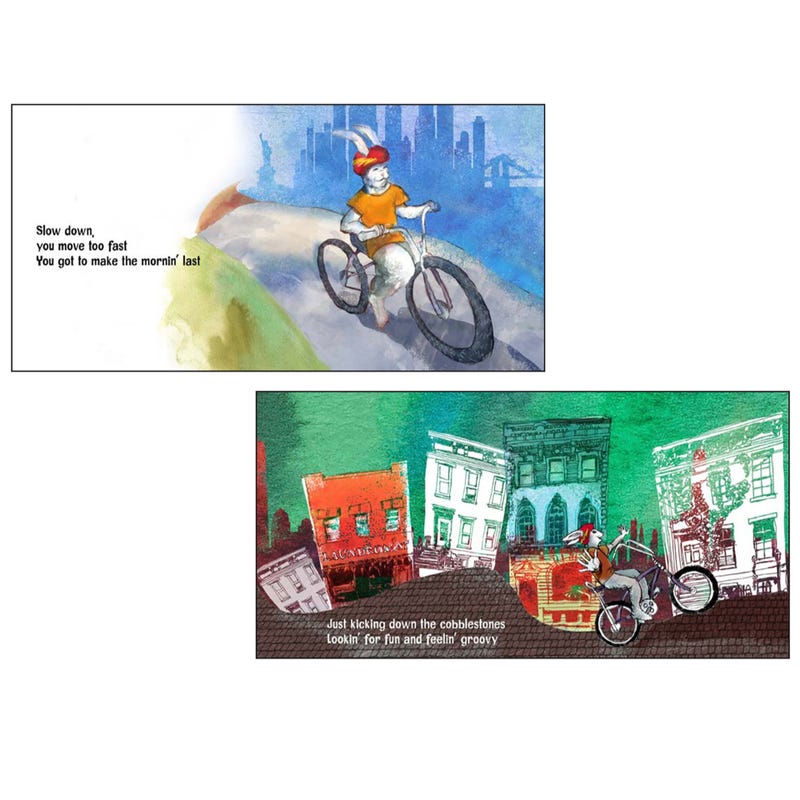 With song lyrics by Simon and illustrations by Keith Henry Brown, this picture book follows a rabbit cycling through town, going about his day, and pausing to admire the “groovy” and lovable aspects of his surroundings. "The 59th Street Bridge Song" provides parents a perfect vehicle to teach kids an appreciation of life’s little gifts.

These new offerings arrive on top of the books already out based on titles and lyrics from the classic tracks “Move The Crowd,” by Eric B. & Rakim, Aretha Franklin’s “Respect,” Nancy Sinatra’s “These Boots Are Made For Walkin’,” and The Go-Gos’ “We Got The Beat.”

Here’s a short rundown of past titles:

Respect, with lyrics by Otis Redding, and illustrations by Rachel Moss, Redding’s classic “Respect” made famous by Aretha Franklin becomes an empowering picture book exploring the concept of mutual respect through the eyes of a young girl.

“The word ‘Respect’ means so much to Otis’s fans around the world,” says Zelma Redding, widow of Otis Redding and President of the Otis Redding Foundation. “And now to have the lyrics depicted and illustrated in this wonderful book is sure to grow a whole new fan base of young readers.”

We Got the Beat, with lyrics by Charlotte Caffey, and illustrations by Kaitlyn Shea O’Connor it’s a celebration of dance and play in picture book form, based on the classic made famous by the Go-Go’s.

"We Got The Beat" Photo credit Akashic Books

“When I wrote ‘We Got the Beat,’ I never thought the lyrics would one day turn into a children’s book!!” says songwriter Caffey. “The illustrations give a brand new life to the lyrics—I hope kids and adults have tons of fun singing them together.”

These Boots Are Made for Walkin’, with song lyrics by Lee Hazlewood, and illustrations by Rachel Moss, the tough-talkin’ hit song popularized by Nancy Sinatra is adapted into a playful children’s book about the inner life of a jealous cat.

"These Boots Are Made For Walkin'" Photo credit Akashic Books

Move the Crowd, with song lyrics by Eric Barrier and William Griffin, and illustrations by Kirk Parrish, who brings the iconic Eric B. & Rakim hip-hop song “Move the Crowd” to life for the first time as a children’s picture book.

Previous books in the Akashic series include, African with lyrics by Peter Tosh, Don’t Stop with lyrics by Christine McVie of Fleetwood Mac, Good Vibrations with good vibes by The Beach Boys’ Mike Love and Brian Wilson, and finally We’re Not Gonna Take It with song lyrics by the one and only Dee Snider of Twisted Sister. Forthcoming titles include Humble and Kind with lyrics by country songwriter Lori McKenna, and (Sittin’ On) The Dock of the Bay with lyrics by Otis Redding and Stax house band member Steve Cropper.

The LyricPop titles are available now and for pre-order at Akashic's website and wherever books are sold.