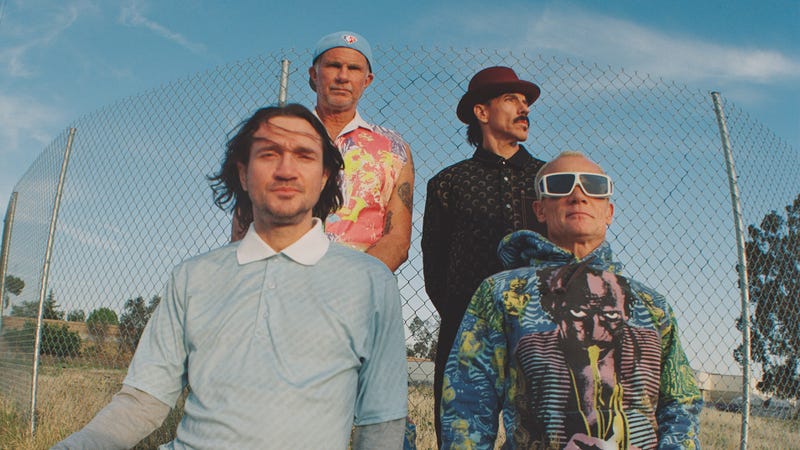 Keeping this year's incredible momentum going after their April double-album Unlimited Love and a major MTV honor as this year’s Global Icons, Red Hot Chili Peppers are back again, this time with their second record of 2022, Return Of The Dream Canteen.

Not long into their fall 2022 tour, RHCP had announced that fans would receive a second full-length offering, Return of the Dream Canteen, following up their April 2022 release Unlimited Love with super-producer Rick Rubin once again at the helm for another double album.

Today is the day! Listen to the brand new, 17-track record, "blossomed during the same sessions that yielded the group’s chart-topper 'Unlimited Love,'" on shelves and streaming now, plus hear new tracks and more songs you're sure to love in the mix on Audacy's Red Hot Chili Peppers Radio!

Announcing the new release, the band says, "'Return of the Dream Canteen' feels like a nod to the creative prosperity of a psychedelic desert. Something about the four of us wandering into a time and place that had less definition than normal lead to more music. We just kept sipping away. The canteen was generous."

The Chili Peppers add, "Just when a blubberously funky baseline seemed like it might lie dormant without a dance partner, its song fellows would show up to party. John’s tenacious focus on treating every song as though it was equal to the next helped us to realize more songs than some might know what to do with. In a world where a single track release is typical, we decided to release back to back double records. We feel good about it. Pass the canteen."

The group just wrapped up a fall tour with The Strokes, Beck, HAIM, St. Vincent, Thundercat, and King Princess as support, and will make their last U.S. appearance at this weekend's Austin City Limits. In the winter, the band will be heading to New Zealand and Australia with Post Malone.