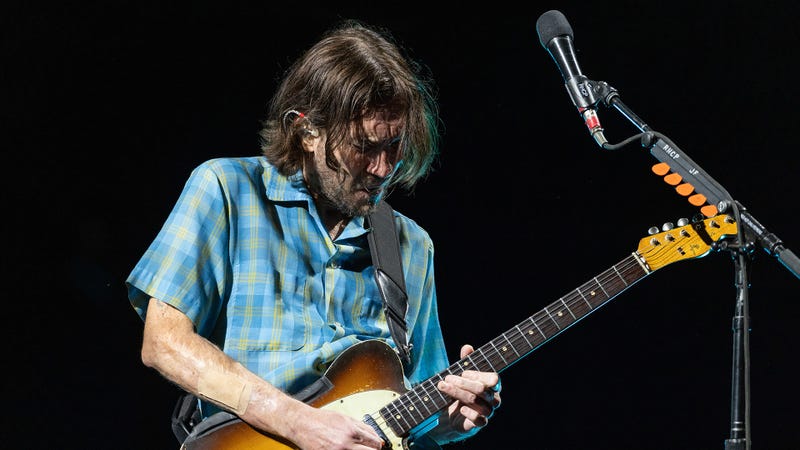 On the heels of two brand new double album releases this year, and a massive tour -- preceded of course by his long-awaited return -- Red Hot Chili Peppers guitarist John Frusciante is back on the Broken Record podcast with producer Rick Rubin to talk about the new RHCP era and look back at the creation of one of the band's biggest hits.

As an aside from their discussion about RHCP's new album and touring schedule -- Frusciante also graciously walked producer host Rick Rubin through his pre-show warmup, while also demonstrating just how he came up with the now-classic major to minor chord changes on the band's fan-favorite 1992 Blood Sugar Sex Magik track, "Under The Bridge."

"My playing... I really believe in the philosophy of, 'You play what sounds good.' You don't play something because it's physically interesting or impressive or anything like that," John explains. Getting ready to perform, however, he goes the opposite direction: "I have these warm-ups that are really based on, 'OK let's forget about the sound that the instrument makes. What's doing something unusual with the fingers that they're not accustomed to doing? How can I play games with my brain with the exercises that teach me things about the nature of the 12-note system that we all use that's gonna be challenging for my fingers as well as my brain?' It's just interesting to me to look at notes in these various ways."

"Oftentimes when I get an idea for writing a song, it feels like I'm remembering something, it doesn't feel like I'm coming up with something new," John says. "What's turned out to be the most beneficial kind of practicing for me is that I'm just creating sort of an encyclopedia of what's been done, and that's all being stored in my subconscious... So, when I write, I'm drawing from that storeroom... For me, that's the productive thing, just to have them all in there and you're doing this mixing and matching thing. It's really more your subconscious that's doing it."

John offers "Under The Bridge" as an example: "When Anthony [Kiedis] had that vocal, I basically had the idea to do something starting in a major key just because what he was doing seemed sad and I wanted to cheer it up a little. Because aside from it being soft, that was another aspect to it that was weird for us; Our music was generally uplifting."

"When it moved to a minor key for the chorus of the song, and the idea to have that part start later than the one instead of the one," he adds, "I drew from this song that I knew in my head. At that moment I could have thought of any song, but I thought this would be a nice little moment to have this space right before the chorus. In a lot of ways, that's why I think learning a lot of songs is really the only way to develop your skill... the skill is giving your subconscious the ability to offer you the right thing at the right time."

Listen to the full part 2 of the Broken Record podcast with RHCP's John Frusciante -- now streaming on Audacy -- and follow along for more conversations with hosts Rick Rubin, Malcolm Gladwell, Bruce Headlam, and Justin Richmond as they speak with the musicians you love to discuss their lives, inspiration, and craft.