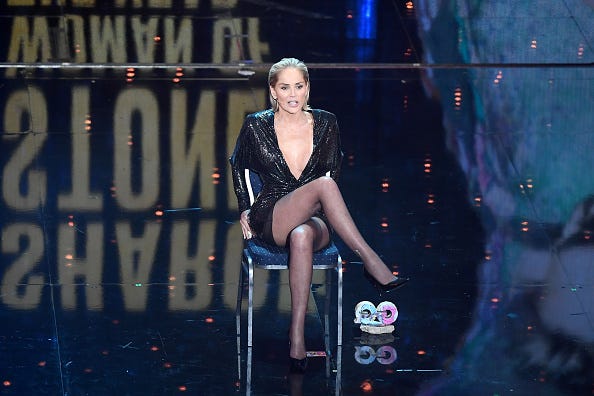 Sharon Stone revisited the role that skyrocketed her to stardom and used it to send a powerful message.

The 61-year-old recreated her iconic leg-crossing scene from “Basic Instinct” at the GQ Awards in Berlin, where she was honored as the Woman of the Year, reported People.

At the #GQAwards, the incredible @sharonstone relives the moment, the gesture that changed her life forever. „We have every right to be powerful in whatever form of sexuality we choose to have – and no one is allowed to take that away from you.“ #sharonstone #metoo #basicinstinct pic.twitter.com/06loMSk3tY

"Some years ago, before we were allowed to be who we were in our little towns, I was sitting on a soundstage and my director said, ‘Can you hand me your underpants? Because we’re seeing them in the scene and you shouldn’t have underpants on. But we won’t see anything,'" the actress recounted while seated on stage. "And I said, 'Sure.' I didn’t know that this moment would change my life.”

Stone then instructed the audience to follow along with her as she crossed and uncrossed her legs as she did in the risqué scene.

“Each and every one of you is going to have a moment like mine -- a moment that changes your life,” she added. “One you might be aware of when it's happening and one you might not."

She continued: “We have every right to be powerful in whatever form of sexuality we choose to have. And no one is allowed to take that away from you."

Stone finished her speech by saying, "I want to say thank you for choosing me to be Woman of the Year because there was a time when all I was was a joke."

The audience responded by giving her a standing ovation.

Released in 1992, “Basic Instinct” was a blockbuster hit grossing over $352 million at the worldwide box office and earned Stone her first Golden Globe nomination.

She went on to reprise the role in the 2006 sequel, “Basic Instinct 2: Risk Addiction.”